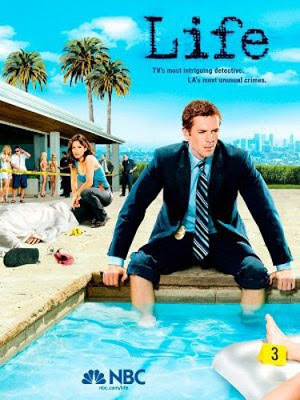 Short-lived NBC cop show Life is smart, quirky, and gripping. Damian Lewis is wonderful as the LAPD cop, falsely imprisoned for murder, who pursues the real killer and conspirators.

In May 2009, after 32 episodes, NBC cancelled the terrific policier Life, starring the hugely talented British thespian Damian Lewis. With a flawless American accent, he played an LAPD cop who returned to work after serving 12 years in prison for a triple murder he didn’t commit.

Over the course of the series, Lewis’s character Charlie Crews solves that crime and pursues the crooked cops who set him up. He and his female partner also crack interesting criminal cases each week.

Having lost his wife, his friends, his job and most contact with the outside world, Crews emerges as a follower of Zen with an amusing fixation on fresh fruit. Critics have compared Lewis’s character with the idiosyncratic protagonists of House and Monk.

Damian Lewis won this year’s best-actor Emmy for Homeland and was previously nominated for three other honors for Band of Brothers. He is delightful in this droll, offbeat role. The Life cast also includes Sarah Shahi, Donal Logue (The Tao of Steve), Adam Arkin (four award nominations for Chicago Hope) and Brent Sexton (The Killing).

The whole series has aired in Australia, Italy, and Lithuania and is available here on Netflix instant streaming.