Alan Waldman: ‘Not Going Out’ is an Extremely Funny British TV Sitcom 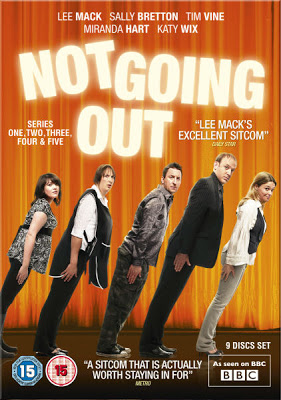 Not Going Out, starring and written or co-written by standup comic Lee Mack, is a side-splitting Britcom series which has aired 44 episodes since 2006. A seventh season and two Christmas specials are coming, and Mack is talking about a film version and a live show.

The highest-rated episode (at imdb.com) is this very funny one. The series has been sold to 120 countries.

Lee plays a thirtysomething slacker who lives in a flat in London’s Docklands neighborhood and spends most of his time on his couch or hanging out in the local pub with his best friend Tim (Tim Vine). What gets him off his couch are his attempts to impress his attractive female roommate/landlady (Megan Dodds in Season 1 and Sally Bretton thereafter). Two hilariously dim characters are his cleaning lady (Miranda Hart, who now stars in the spinoff series Miranda) and Tim’s girlfriend Daisy (Katy Wix).

A lot of Not Going Out’s humor is based on word play and double entendres, delivered in a deadpan manner, which is the comedy style Mack and Vine have both used in stand-up acts.

Season 1 is on Netflix now, Season 2 is coming, and all episodes are on YouTube. I enthusiastically urge you to sample the episode linked to above. My wife and I saw it last week — and howled with mirth.

This entry was posted in Rag Bloggers and tagged Alan Waldman, British Television, Criticism, Lee Mack, Not Going Out. Bookmark the permalink.