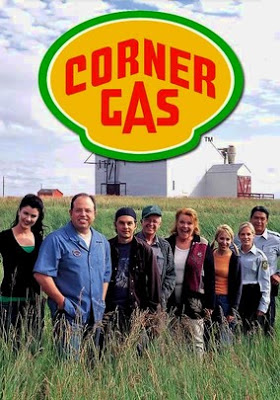 [In his weekly column, Alan Waldman reviews some of his favorite films and TV series that readers may have missed, including TV dramas, mysteries and comedies from Canada, England, Scotland and Ireland. Most are available on DVD and/or Netflix, and some episodes are on YouTube.]

For many years American shows (and hockey) have dominated the Canadian Top 20 TV charts, but Brent Butt’s wildly clever 2004-2009 sitcom Corner Gas  shattered that, also grabbing most of the major Canadian comedy awards over that span.

It is set in a very small fictional town, Dog River, in the middle of nowhere on the flat Saskatchewan prairie. Writer-creator Brent Butt plays Brent Leroy, the sarcastic, comic book-reading owner of the only gas station for 37 miles. Janet Wright is very funny as his quick-tempered mom, as is Eric Peterson as his crotchety dad. Tiny Nancy Robertson, who plays his quirky, self-declared genius cashier (and who married Butt after the third season), is adorable in the role.

The rest of the excellent regular cast (each of whom has been nominated for at least three major Canadian awards) are Fred Ewanuick as Brent’s dim-witted best friend, Gabrielle Miller as the insecure owner of the coffee shop next door and Lorne Cardinal and Tara Spenser-Nairn as local cops with nothing to do.

The first four seasons are on Netflix, and all complete episodes of the six seasons are on YouTube. My wife and I love watching Corner Gas and also enjoy Hiccups, the sitcom Mr. and Mrs. Butt have done since it ended.

Corner Gas has been nominated for 82 top Canadian awards, winning 29. Brent was nominated for 35 as producer, writer, or actor (winning 15). Robertson, Miller, and Wright each snagged eight noms, with Ewanuick getting six and Peterson four.

After the legendary sketch series SCTV (which gave us John Candy, Rick Moranis, Andrea Martin, and Eugene Levy), Corner Gas is the best Canadian comedy I have ever seen, and I think you will really enjoy it. Here is the first episode, so you can judge for yourself.