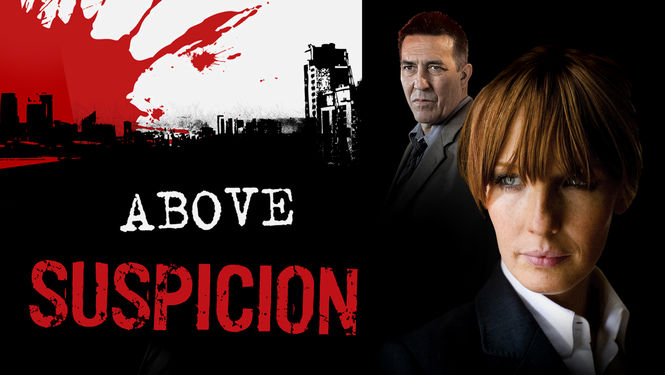 Above Suspicion is gripping, intelligent viewing.

All four two- and three-part Above Suspicion stories are available on Netflix and YouTube, and they are well worth discovering. The series aired from 2009-2012 and then was cancelled. Here’s the beginning of an episode.

The series is based on the novels Above Suspicion, The Red Dahlia, Deadly Intent, and Silent Scream by Lynda La Plante, who has won six major awards and three other nominations for Prime Suspect and Prime Suspect 3 but who’s also written Trial & Retribution, The Commander, Bella Mafia, Widows, Framed, Prime Suspect 2, two movies and nine other TV series.

In the first series Anna was assigned to her first homicide case, a string of grisly murders that have gone unsolved for the past eight years. The discovery of a new victim, who doesn’t fit the usual profile of prostitute or drug user, causes concern that the killer may be indiscriminately targeting his victims. Eager to prove herself, Anna uncovers a vital piece of evidence linking one man to all the killings. But things get complicated when she finds herself attracted to the prime suspect. Jason Durr plays the handsome, but suspicious movie star. The two-part episode averaged 7.05 million viewers,

In the 2010 second series, inspired by the real-life 1940s unsolved Black Dahlia case in Los Angeles, a young girl’s body is dumped, horrifically mutilated and drained of blood. Anna must race against time to catch the copycat killer, dubbed “The Red Dahlia” from the flower his victim wore in her hair.

Guest cast in this series include the great Sylvia Syms and romantic comedy star Simon Williams (romantic lead in Upstairs, Downstairs) as the creepy villain. We learn he performed an abortion on his emotionally challenged daughter, possibly after knocking her up. And it looks like he’s going to escape from the cops.

The series concluded with 2012’s Silent Scream in which a promiscuous, temperamental young film star is murdered on the verge of publishing a scandalous memoir. Romantic drug dealing, escaping across the roof, a corpse in the river and a mysterious crucifix add to the dark doings.

Rugged Northern Irish actor Ciarán Hinds, among his 99 credits, has seven major awards and nine more noms, including wins for Rome, Mayor of Castorbridge, The Eclipse, Frozen, and Tinker, Tailor, Soldier, Spy. He has also appeared in There Will be Blood, Prime Suspect, Road to Perdition, Veronica Guerin, Calendar Girls, Phantom of the Opera, and Munich.

Kelly Reilly’s 51 credits include Poirot, Pie in the Sky, and Prime Suspect. She has seven wins (including Mrs. Henderson Presents and Pride and Prejudice) and four nominations (Russian Dolls, Eden Lake, He Kills Coppers).