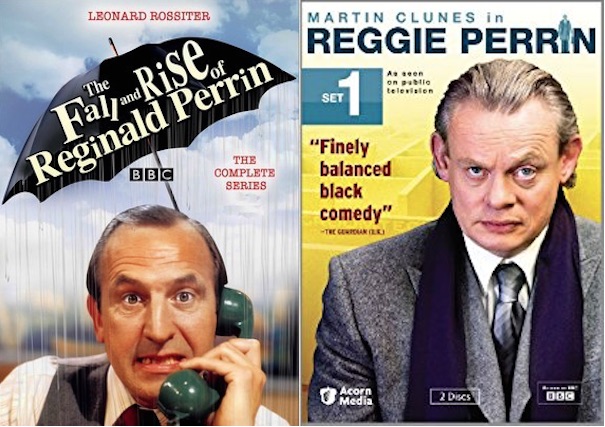 The black comedy of the Reggie Perin series.

David Nobbs wrote a funny, satiric novel originally titled The Death of Reginald Perrin in which a depressed, unsatisfied sales executive fantasizes about his secretary, hates his oppressive boss and idiotic yes-man subordinates, writes insulting letters to customers, and fakes his own suicide. Then things get strange.

After his return, Reggie opens a shop called Grot selling useless things like round dice and square hoops and becomes a surprise success. Later he forms a society where people learn to get along.

Both series feature way-out gags. Whenever Reggie sees his mother-in-law he visualizes a rampaging hippopotamus. To explain being 11 minutes late to work each day he cites progressively weirder excuses, like “escaped puma at Chessington North.”

In the Clunes version he hires and goes to a ditsy therapist. My favorite joke: One day she tells him, “today we’re going to try Sobbing Therapy. I found it listed between Shopping Therapy and Sperm Therapy. It’s actually similar to Sperm therapy (pause) in that you use a lot of tissues.”

Both series are wildly enhanced by the amusing supporting casts. Rossiter got to play off Pauline Yates, John Barron, Sue Nichols, and Patricia Hodge. Clunes gets to bounce off the talents of Fay Ripley, Neil Stuke, Wendy Craig, Geoffrey Whitehead, and Sue Earl as the dimwitted “wellness person.”

All 24 episodes of the former series and all 12 of the latter are on Netflix and many are free on YouTube. Here’s an episode of the first series. And here’s one from the Clunes version.

Series 1 earned seven nominations, a BAFTA for best sitcom, and three noms for Rossiter. Leonard Rossiter also won the 1981 Evening Standard Peter Sellers Comedy Award. 93.2% of 1,139 voters at imdb.com gave Fall thumbs up and 25% rated it a perfect 10. It was strong with all demos, but best with people 45-plus.

There were three series of Fall and Rise, followed by a Christmas special and, a decade after Rossiter’s death, by an unsuccessful follow-up series starring Geoffrey Palmer called The Legacy of Reginald Perrin. A short-lived U.S. version was broadcast on ABC in 1983 as Reggie, starring Richard Mulligan.

Leonard Rossiter’s 71 credits include Rising Damp, Oliver!, The Pink Panther Strikes Again, Alice in Wonderland, and Britannia Hospital. Pauline Yates’ 71 credits include Rumpole of the Bailey, Bootsie & Snudge, and Maigret. John Barron’s 95 include Yes Minister, To the Manor Born, and Girl in a Black Bikini.

Some critics and viewers, utterly charmed and delighted by Rossiter’s shenanigans, were cooler to Clunes’ tale. Wifey and I were utterly delighted by both versions and sneakily suspect you will too. Though silly, this is very witty and original TV!