Lesley Sharp, Suranne Jones, and Amelia Bullmore are deft as police inspectors great at their jobs but shaky in their personal lives. 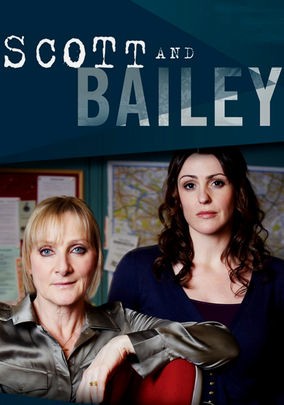 Recently most U.S. public broadcasting stations have been airing the 30 excellent episodes (from four seasons) of Scott & Bailey that were shot over the past five years. Netflix offers 14 episodes from the first two seasons and you can watch this episode on YouTube.

This British policier’s main characters are Detective Constable Janet Scott (Lesley Sharp) and Detective Constable Rachel Bailey (Suranne Jones), both of whom are members of the Major Incident Team of the fictional Manchester Metropolitan Police, headed by Detective Chief Inspector Gill Murray (Amelia Bullmore). Based on an original idea by Jones and Sally Lindsay, Scott & Bailey was commissioned after the concept was brought to acclaimed TV writer Sally Wainwright (major awards for Happy Valley and Last Tango in Halifax).

Wainwright co-created the series with former Manchester police inspector Diane Taylor, based largely on the latter’s experiences. Wainwright penned 28 episodes, Taylor 23, and actress Suranne Jones (who thought up the idea of a British Cagney & Lacey) 25. Actress Bullmore wrote seven, including the last two I saw.

The three lead characters are smart, strong, sexy women with messy personal lives that seep into their work lives. Their interesting, detailed investigations uncover a variety of cultural and socioeconomic challenges facing modern Britain. Interrogations are highlights of each episode and are especially revealing about the way detectives and suspects think.

Rachel and Janet are close friends with different personalities: Rachel is impulsive and free-thinking, whereas Janet is subtle and wise. Janet, who is 15 years older than Rachel, is married and has two daughters, though her marriage is somewhat stale. She has a sexual relationship with a work colleague (played by her actual husband, Nicholas Gleaves) in Series 1 and 2. Eventually Janet and her TV husband separate, and her mother moves in to help raise the children, with Janet getting home late most nights.

In Series 1, Rachel was involved in a tempestuous and unstable relationship with a barrister, Nick (Rupert Graves), who she discovers is already married with children and is a serial womanizer. In Series 3 Rachel does marry but for the wrong reasons, and later starts having an affair with cop colleague Kevin.

The program was nominated for four Best TV Drama Series Awards, and Best Actress/Supporting Actress noms went to Sharp, Bullmore (a win) and three for Jones.

Actual police Inspector Diane Taylor believed that police procedurals were often filled with not only technical inaccuracies, but what she felt were inaccuracies of how officers behaved. She said, “What really irritates me in other dramas is detectives crying over dead bodies and getting drunk senseless. You’d last about two weeks in real life.” Taylor’s involvement as a consultant producer has been credited with maintaining Scott & Bailey ’s “rigorous authenticity.”

Detective Chief Inspector Gill Murray (Bullmore) is head of the Major Incident Team and also a single mother. Nicknamed “Godzilla” by Rachel, Murray is demanding and sometimes blunt, though she has a lighter side. She has been close friends with Janet for over 19 years, but her relationship with Rachel is largely work-based and is at times strained.

Lesley Sharp has won four major awards and earned six other nominations for works including The Full Monty, Bob & Rose, and Afterlife. I enjoyed her way back in 1998 in the soccer drama Playing the Field. Suranne Jones won three Best Actress honors for Coronation Street and three acting noms for this series. Amelia Bullmore has appeared in lots of my favorite series, including Cracker, Dalziel & Pascoe, Agatha Christie’s Poirot, Inspector Lewis, and Sherlock.

Scott & Bailey has received generally good reviews thus far. The Daily Telegraph praised the program’s script and its likeness to reality in portraying the professional conduct of modern policing, stating that “this is a beautifully engineered program: it’s both pleasingly sudsy and deliciously grisly, but manages to transcend both the soap and detective genres. Somehow Sally Wainwright has made the traditionally dull quality of professional competence seem positively thrilling.”

Since Scott & Bailey ’s debut it has fared well in the ratings. The pilot episode was 2011’s fourth highest-rated drama broadcast, as well as the highest-rated broadcast for a new drama.

My wife and I look forward to this series each week and really enjoy the writing, acting, and surprise snippets of humor.