Alan Waldman : ‘The Kumars at No. 42’ is Funny and Original British Fake Talk Show 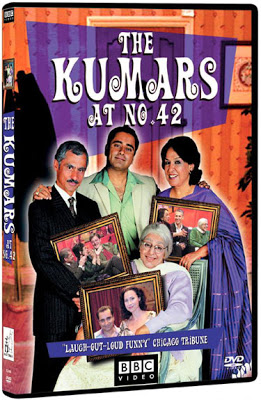 The Kumars at No.42 is a series of extremely funny “talk shows” conducted by a fictional Anglo-Indian family who welcome 106 British and American celebrities into their home and backyard TV studio. Part of each show was brilliantly scripted, but the cast didn’t know what guest comments they’d have to spontaneously respond to. So there was lots of brilliant improvisation.

Kumars stars and was co-written by very talented Sanjeev Bhaskar. His fictional family was composed of his parents Madhuri and Ashwin Kumar (played by Indira Joshi and Vincent Ebrahim) and Sushila, Sanjeev’s naughty grandmother (Meera Syal). They supported Sanjeev’s aspirations to host a talk show by having a TV studio built on what used to be their back garden.

Running jokes include Sanjeev’s apparent social ineptitude, Grandma’s coming on to all the male guests, and Ashwin’s obsession with financial matters as well as his tendency to tell long stories with no real point. A regular conceit is that the guests’ appearance fees are paid in chutney.

Bhaskar said in a 2009 interview, “We never rehearsed the guests, and the best ones were those who could keep the ball in the air.” Here’s an episode.

There were three Anglo-Indian male writers on Kumars. Sadly, one of them, Sharat Sardana, died of a streptococcal infection at age 40.

Myra Syal, who stole the show each week with her hilarious antics as the randy grandmother, is a true Renaissance woman. She wrote the screenplay of the excellent film Bhaji on the Beach, she wrote Britain’s best-selling 1999 book Life Isn’t All Ha Ha Hee Hee and she sang the number one record, “Spirit in the Sky,” from a Kumars episode on the Comic Relief show. In 1997 she was awarded the cherished MBE in the New Year Honors, and in 2005 she married Sanjeev Bhaskar, who played her grandson on Kumars.

The Kumars at No.42 aired on many international channels and in the U.S. on Comedy Central. In America there was talk of remaking the franchise, changing the family to a Mexican one called The Ortegas, but the idea was abandoned. Eighteen episodes of Kumars are on DVD and Netflix, and many episodes are on YouTube.

Previously, from1998 to 2000, Bhaskar, Syal, and Kumars co-writer Richard Pinto penned the wildly hilarious 19-episode sketch comedy series Goodness Gracious Me. In it, Syal, Bhaskar, Nina Wadia, and Kulvinder Ghir poked fun at Indians in Britain and their cultural peculiarities. Some of the outlandish sketches included a father who thinks everything comes from India, parents who tell their children that they could get everything cheaper somewhere else, teenage girls who mistakenly think boys are pursuing them, and our favorites: “Skipender the Punjabi Kangaroo.”

The two Skipender clips were segments of the popular 1967-1970 Australian kids’ show, Skippy, with a kangaroo playing the Oz equivalent of Lassie. In the parody, an Indian actor voices the roo’s thoughts, talking about drunkenness, bestiality, Henry Kissinger, and other children’s issues. When it first aired on BBC America, I would videotape the episodes and play them later for my wife, Sharon. One day she came home from work and wanted to see “Skipinder.” To her horror, I confessed that I had taped a later episode over it.

Fortunately, soon thereafter I met and befriended the then-head of BBC America and begged him to mail me copies of the two “Skipender” episodes. “Listen,” I pleaded, “since I deleted them, my marriage is hanging by a thread!” He generously mailed me 16 episodes, and as a result, two decades later I am still married to Sharon. Here is one of the “Skipender” bits.