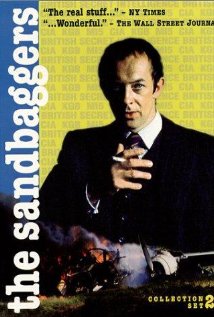 Most North Americans have never heard of the excellent British spy series The Sandbaggers (1978-1980), although it had a cult following in San Jose, California, where station KTEH aired five runs of it.

This taut, highly realistic fictional series about a covert operations division of British Intelligence, headed by Neil Burnside (Roy Marsden, who starred as P.D. James’s Inspector Dalgleish from 1983-1998 and who appeared in 79 other British films and series), is extremely well written and performed.

Three series and 20 episodes aired from 1978-1980, and there would have been more, if not for author/creator Ian Mackintosh’s mysterious death. All episodes are on Netflix and most are on YouTube.

In 2003, The New York Times called The Sandbaggers “the best spy series in television history.” It centers on the elite covert operations section of British Intelligence, nicknamed the Sandbaggers, and their boss, Neil Burnside, himself a former Sandbagger, who now has to battle more with British bureaucracy than with enemy agents. It was set contemporaneously with its original broadcast in the late ’70s and early ’80s, when the Cold War dominated the Western intelligence agenda.

Ray Lonnen (who played Sandbagger One, Willie Caine) explaining why Series Two has only six episodes, revealed in an interview that a second series episode was apparently vetoed by censors because it dealt with sensitive information.

The Sandbaggers is as tense as a coiled spring. It is a cold war dirty tricks department dealing in sabotage, defector-lifting, anti-communist coups and the occasional assassination. Boss Neil Burnside is in constant collision with his political masters — especially his inept, upper-class twit of a boss.

Managing to inject an astonishing amount of venom into every “Yes sir,” Burnside is one of the most compelling characters ever to grace a TV drama. He’s a master of rudeness, ruthlessness, and double-dealing, who somehow manages to be both unruffled and increasingly unhinged.

One minute he’s about to assassinate a once-trusted colleague in the coolest, politest way; the next he’s dodging both the KGB and his own government, while trying to sabotage nuclear-arms-reduction talks in Malta.

The plots are as ingenious and labyrinthine as anything penned by John le Carré. And because the team fights dirty whether they’re wielding guns or files, the office scenes are never dull, even if Burnside does say that being a Sandbagger means “hours of boredom pushing paper down in the hutch and then the obligation to risk your life at the whim of some idiot in Whitehall.”

He at one time declares: “If I want to send an agent to the lavatory, I need the Foreign Secretary’s permission, and if I want him to do anything when he gets there, I need the Prime Minister’s written approval!”

Whenever the Sandbaggers venture out into the field, the series erupts into violence, with operatives dropping like flies across all three seasons.

Whenever the Sandbaggers venture out into the field, the series erupts into violence, with operatives dropping like flies across all three seasons. Just as you’re starting to get to like an agent, he’s dispatched during some dreadful fuck-up. Burnside says: “There are no charmed lives in this business.”

At one point, though, he seems to be softening, falling for female Sandbagger Laura Dickens (Diane Keen). Then a conflict of interest during a breathless Berlin Wall handover puts an end to that.

The series was created by Ian Mackintosh, a former intelligence officer who mysteriously vanished while flying a small plane off the Alaskan coast in 1980. There has been speculation that his disappearance was no accident or had to do with a secret mission he was undertaking. Mackintosh and his girlfriend, a British Airways stewardess, were declared lost at sea, after their single-engine aircraft  went missing following a radioed call for help.

Some of the details surrounding their disappearance have caused speculation about what actually occurred, including their stop at an abandoned United States Air Force base and the fact that the plane happened to crash in the one small area that was not covered by either U.S. or USSR radar, although it was teeming with Soviet submarines. No plane wreckage was ever found.

Mackintosh was developing the next season of Sandbaggers at the time of his disappearance. However, after his (apparent) death, the producers decided to end the series, believing no one could write Sandbaggers as well as MacKintosh. He was awarded the cherished British MBE award.

The Sandbaggers inverts most of the conventions of the spy thriller genre, in sharp contrast to the “girls, guns, and gadgets” approach established by the James Bond movies. Neil Burnside is a harried spymaster who doesn’t drink; Willie Caine is a secret agent who abhors guns and violence; and no character is seen to have sex during the course of the series. The bureaucratic infighting is reminiscent of John le Carré’s George Smiley novels.

The series’ style is gritty realism, and plots are complex, twisty, and unpredictable, but the dialogue is intelligent and frequently witty. The Sandbaggers was perhaps the only televised or cinematic version of intelligence to get anywhere near the actual way in which the MI-6, KGB, and CIA actually operate. Though a bit dated visually, it is an excellent series well worth your time.