Alan Waldman : ‘The Vicar of Dibley’ Is One of the Funniest and Most Popular Britcoms Ever 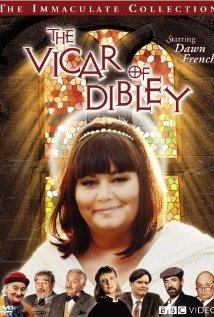 Dawn French heads a hilarious cast in a series about a female clergywoman in a quirky small town.

Richard Curtis is one of England’s most brilliant and beloved writers, and the jewel in his crown is probably the riotous situation comedy The Vicar of Dibley.

Vicar received six awards and 17 other nominations, including 10 BAFTAS—four for star Dawn French. She was nominated for five other awards, winning a British Comedy Award, as did hilarious co-star Emma Chambers. A 2004 national poll rated Vicar the third-favorite British sitcom ever. In ratings, it was among the most popular shows in the digital era — with various Christmas and New Year specials in 1999, 2004, 2005, 2006, and 2007 among the top 10 programs of that year. More than 93% of the 4,087 people rating it at imdb.com gave it thumbs-up, and 37.1% considered it a perfect 10.

Vicar first aired in 1994 and ran for 18 episodes and three specials, before adding two episodes in which the Reverand Boadicea Geraldine Julie Andrews Dick van Dyke Supercalifragilisticexpialidocius Chim-Chiminey Chim-Chiminey Chim-Chim-Cheree Granger (her name during the ceremony) was married. Airing in 2006 and 2007, they were watched by 11.4 million and 12.3 million viewers, respectively.

Vicar is set in a small English village after the Church of England in 1992 changed its rules and allowed the ordination of women. Beloved British comedienne Dawn French is literally and figuratively larger than life as a clergywoman who takes over the local church and brings many startling (and side-splitting) changes. Vicar Geraldine Granger was created by Richard Curtis, who wrote the series with Paul Mayhew-Archer (a lead writer of the very funny 2000-2006 Britcom My Hero).

The obese and outrageous Vicar describes herself as “a babe with a bob cut and a magnificent bosom.” She is a chocoholic who hides candy bars throughout her home — even in hollowed-out bibles.

The actors who play the main characters in her parish comprise one of the funniest, most original comic ensembles of all time. One of the two funniest and most adorable “stupid” characters I ever saw (along with James Dreyfus in The Thin Blue Line) is the Vicar’s best friend Alice, brilliantly realized by Emma Chambers. After the final credits on each episode, the Vicar tells Alice a joke (usually off-color), but Alice takes it literally and doesn’t get it.

Local farmer Owen (wonderful Roger Lloyd Pack) has extremely poor hygiene and apparently engages in bestiality. In one episode he declares a rumor that the vicar is a lesbian to be the “best news since they made having sex with animals legal again.”

In the first season only, Liz Smith plays wacky old lady Letitia Cropley, who has created and cooked such revolting foods as “Bread and butter pudding surprise” (snails), orange cake with Branston Pickle icing, parsnip brownies, and plain pancakes “with just a hint of liver.” She is sometimes referred to as “the Dibley Poisoner.”

Three seasons of The Vicar of Dibley are available on Netflix and streamable on Netflix Instant, and all episodes and specials, including this classic one, are on YouTube. If you like surprising, off-beat, extremely original humor, Vicar is a treasure you should discover.