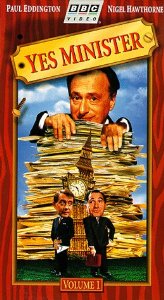 Paul Eddington and Nigel Hawthorne are outstanding as a British Minister and his civil servant nemesis in Yes Minister and Yes Prime Minister.

Two comic TV series beloved by British audiences, critics, and Prime Minister Margaret Thatcher (who claimed it gave her “hours of pure joy”) were the 23-episode 1980-84 political comedy Yes Minister and its 16-episode 1986-88 sequel, Yes Prime Minister. All episodes are available on Netflix, and most can be seen on YouTube.

The first series is mostly set in the private office of M.P. Jim Hacker (beautifully played by Paul Eddington), who holds the (fictional) title of Minister of Administrative Affairs. He is constantly coming up with legislation and suggested departmental changes, but, alas, he is eternally undercut by his Permanent Private Secretary, Sir Humphrey Appleby (a magnificent Nigel Hawthorne), who like all true bureaucrats doggedly wants to maintain the status quo.

Caught in the perpetual crossfire is Principal Private Secretary Bernard Woolley (a very funny Derek Fowlds). In the sequel series, Hacker has risen to prime minister and Sir Humphrey and Bernard have followed him to 10 Downing Street

Sometimes Sir Humphrey succeeds in thwarting Hacker’s latest reform effort, but on other occasions the minister outsmarts the big bad bureaucrat and gets his way. Sir Humphrey is snobbish and supercilious, has cynical views of government, speaks in complicated sentences, and is a master of obfuscation.

Usually once per episode he delivers a towering oratorical aria that viewers (like comic Stephen Fry) looked forward to and adored. Hacker is a well-intentioned, indecisive, publicity-mad bungler. Bernard frequently strikes comic gold by pedantically pointing out the impossibility of Hacker’s or Humphrey’s mixed metaphors.

Here is a sample episode of Yes Prime Minister.

Political scientists have praised the two series for their accurate and sophisticated portrayal of the relationships between civil servants and politicians. The shows are actually quoted in some British political textbooks. They have significantly changed the way viewers regard politicians and career civil servants, because they so brilliantly expose the bullshit beneath governmental and political public utterances.

The Guinness Television Encyclopedia suggests that “real politicians enjoyed the show’s cynical dismissal of Whitehall intrigue and its insights into the machinations of government.”

In an interview, Fowlds explains the show’s near-universal popularity: “Both political sides believe that it satirizes their opponents, and civil servants love it because it depicts them as being more powerful than either.” The programs avoided having Hacker belong to any specific party, perhaps because writer Lynn supported Labour while co-writer Jay was a Thatcher fan.

The idea for the series dates back to when Lynn, thinking he might like to enter politics one day, joined the Cambridge Union debating society. He recalls: “All of the main debaters there, aged 20, were the most pompous, self-satisfied, self-important bunch of clowns that I’ve ever clapped eyes on. They were all behaving as if they were on the government front bench,” and 20 years later many of them were.

Lynn decided that the best way he could ever contribute to politics was in making fun of the politicians. He and co-writer Jay did so magnificently in these masterful comedies.