Alan Waldman : ‘Wire in the Blood’ is a Gripping British Crime Series 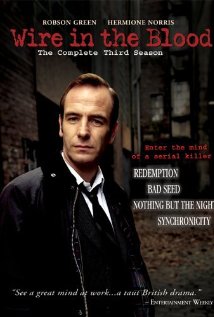 Wire in the Blood is an outstanding British crime series based on the best-selling Tony Hill novels of gifted Scottish mystery writer Val McDermid. It stars fine Brit actor Robson Green as psychologist Tony Hill, who has the extraordinary ability to get into the minds of serial killers and other creepy criminals and help police bring them to justice.

From 2002 through 2008, 27 episodes of Wire aired over six seasons. They are all available on Netflix, Netflix Instant and YouTube. The series won an Edgar award for Best TV Episode Teleplay for scripter Patrick Harbinson and noms for two other episode writers, actor Green, and “Best TV Crime Program.” It was a ratings and critical winner and aired in 30 countries in Europe, Asia, North America, Latin America, and Oceania.

In Britain over the past decades there has been a very popular literary genre called “Tartan Noir,” featuring strong, dark mysteries by great Scottish writers such as McDermid and Ian Rankin (TV adaptations of whose Rebus novels I have reviewed here previously). When McDermid or Rankin publishes a new novel, it often goes to number one on British best-seller charts.

Carole and Alex continually struggle with their superior officers, who are skeptical of Hill’s unorthodox methods and far-fetched theories. Tony so identifies with the mass murderers and child rapists he hunts that he finds it hard to distance himself from the cases.

Despite the terrible crimes depicted, these are all brilliantly written and acted episodes.

Four episodes were based directly on McDermid’s novels, and the other well-scripted 23 episodes were penned by others, based on her characters.

I have read and thoroughly enjoyed all 25 of Sir Ian Rankin’s novels, as well as 15 of Val McDermid’s. Her first seven Tony Hill/Carole Jordan mysteries are all terrific and highly recommended: The Mermaids Singing (The Crime Writers’ Association’s “Best Crime Novel of 1995”), The Wire in the Blood, The Last Temptation, The Torment of Others, Beneath the Bleeding, Fever of the Bone, and The Retribution. And I am haunting my local library catalog for her eighth, Cross and Burn, which comes out this year.

The vicious character Vance, the villain in the book/episode Wire in the Blood and two subsequent novels, is based on McDermid’s interview with Sir Jimmy Savile, a popular TV host (Tops of the Pops, a long-running music chart show), charity fundraiser, and media celebrity. He was discovered, after his death, to be to be one of England’s most prolific child rapists and sex offenders — accused in hundreds of cases. To render this psycho more interesting, McDermid also makes Vance a torturer, murderer, and arsonist.

Confession: Although I didn’t really enjoy the novels I read in her Lindsay Gordon and Kate Brannigan lesbian detective series, I was fascinated by some of her non-Hill/non-Sapphic sleuth novels, including A Place of Execution, A Darker Domain, and The Distant Echo. Like the TV series, these novels are smart, twisty, and full of complex characters.