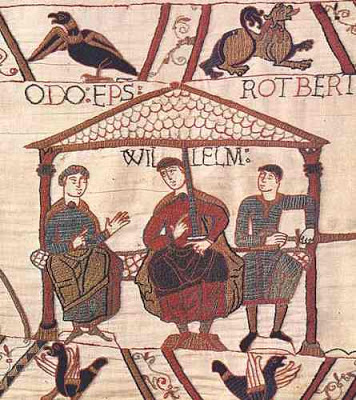 William the Conqueror, first Norman king of England, as depicted on the famous Bayeux Tapestry. His royal descendants would speak French until Henry V, 350 years later.
Blast from the past:
Class division in the English language

Would you rather receive a hearty welcome or a cordial reception?

Notice the imagery and feelings evoked by the two phrases. The first has a Germanic origin, the second, French. The English language is split along class lines — a reflection of the Norman invasion of England, almost 1,000 years ago. German-derived English words carry with them a working class connotation, and French-derived words come off sounding aristocratic and slightly repulsive.

Even though cordial literally means “of the heart” in French (cor is Latin for heart), the picture that comes to my mind is a royal douchebag entering a hall of power amidst classical music and overdressed patrons and nobility.

The image I get from hearty welcome is the extreme opposite: a single peasant reaching out to hug me and get me into their little hovel, out of the weather. Class is deeply embedded within our language, each word having its own unique history.

1. Old German — the Angles and Saxons (from Saxony) conquered Britain in the 5th century, mixing with Scandinavians and developing Old English.
2. Old French — the Normans (from Normandy) conquered England in 1066.

After the Norman invasion, England was dominated by a small French aristocracy, ruling over a much larger German working class. For more than three centuries, the rulers of England spoke French, while the common person spoke a Germanic language (Old English).

The two cultural groups began to intermarry after the Black Death of the 1340s wiped out half of the population, and over time the languages slowly merged, greatly simplifying the grammar of English, but also leaving a huge combined vocabulary.

The really interesting thing is that a lot of words in English carry a class connotation, based on whether they derive from French or from German. Words that mean basically the same thing will have either a formal, fancy, academic, upper-class connotation, or a casual, down-to-earth, gut-level, working-class feeling depending on the origin of the word.

Notice that the Germanic words are usually shorter, more concrete and direct, while the French words are more elaborate, more abstract and indirect. What kind of person do you imagine speaking the words in the left column vs. the right column?

It’s interesting to me that nature and children are described by the French-derived English words as somehow negative or hostile, as with savage and juvenile. To me this reflects the hatred on the part of the wealthy and powerful for that which is untamed and free.

The medical-industrial complex also uses almost exclusively Latin and French-derived words, to sound more technical. This has the effect of making the body seem lifeless and mechanical, as with abdomen.

Plus, meat words are almost all French-derived, which reflects that while the Anglo-Saxon working class was responsible for hunting/shepherding the animals, it was only the Norman nobility who could actually afford to eat meat.

Chicken and fish are the exceptions here, most likely because these meats were less expensive and more available for peasants and workers.

I notice that when I use the French-derived words, I experience a slight feeling of discomfort, as if I’m trying to impress people with my big words. This is precisely how academia functions, which is why if you attend a university or graduate school, you will be inundated with French and Latin-derived vocabulary, to distinguish you from the uneducated masses with their street language.

Might all of this explain why American conceptions of the French are as snooty, pompous, pretentious, easily-hate-able snobs? In occupied England, THEY WERE!

And for anyone interested in working class revolution, the best way not to talk down to people: stick with the more common Germanic words instead of bureaucratese.

Towards freedom! (not mere liberty)

(George Orwell wrote an awesome essay called Politics of the English Language, where he breaks down how abstract, complex language is a tool for those who seek to confuse the populace, and he outlines how to make use of concrete, plain English to actually reach people. A highly recommended essay for anyone who wants to write.)

This entry was posted in Rag Bloggers and tagged Alex Knight, Etymology, Language. Bookmark the permalink.

7 Responses to Alex Knight : Class and the English Language