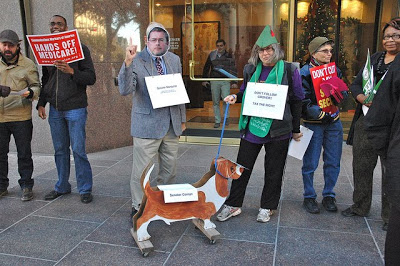 Union members, MoveOn, and citizens who want to protect Social Security, Medicare, and Medicaid, made their message to Senator Cornyn clear with a ‘Candlelight Campaign against Cuts.’

AUSTIN — Grover Norquist, Racketeer for the Rich, made an unannounced visit to Senator John Cornyn’s district office in Austin, Texas, on Monday, December 10, 2012. His message, “Don’t Tax the Wealthy,” is still wildly in vogue with Republicans. A group of citizens was there with another message for Senator Cornyn.

Cornyn (who was affectionately known as “Corn Dog” by George W. Bush), was present in canine form in front of the real Cornyn’s district office. Rag Blogger Thorne Dreyer (as Grover) tussled with Corn Dog handler, Alice Embree, over the direction he should take. Grover kept urging hard right turns.

As part of nationwide protests that coincided with International Human Rights Day, union members, MoveOn, and citizens who want to protect Social Security, Medicare, and Medicaid, made their message to Senator Cornyn clear with a “Candlelight Campaign against Cuts.” There were also demonstrations in Dallas, Austin, Corpus Christi, Laredo, San Antonio, and Houston suburb Sugar Land.

Hats off to the spirited nurses who brought “Robin Hood” hats and a banner that read: “Don’t Push Seniors Off the Fiscal Cliff, Tax Wall Street.” (See RobinhoodTax.org and like it on Facebook.)

Here are links to demonstrations around Texas: