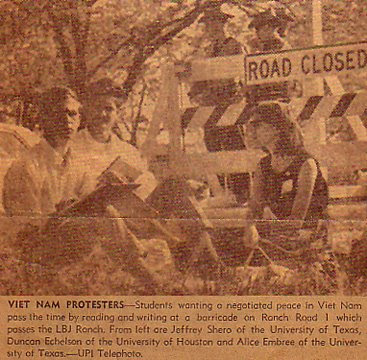 Alice Embree, with Jeff Shero (left) and Duncan Echelson, shown at LBJ Ranch during a peace vigil on Easter in 1965. This UPI telephoto was reproduced in Prairie Radical, a memoir by former Austin activist Robert Pardun.
An Activist History of Easter in Texas:
Camp Casey and the LBJ Ranch

By Alice Embree / The Rag Blog

[Three years ago, Austin activist and Rag Blog contributor Alice Embree spent Easter weekend at Camp Casey near George Bush’s ranch in Crawford, Texas. She describes this experience and reflects on an earlier Easter vigil at another presidential ranch in 1965. The Rag Blog is publishing her remembrance this Easter weekend.

Embree, who was a founder of The Rag — Austin’s legendary underground newspaper from the 60s and 70s that served as inspiration for The Rag Blog — originally posted this article on April 24, 2006 to The Rag’s website.]

President Bush’s ranch in Crawford, Texas, was a retreat until last August when Cindy Sheehan brought the war protest there. The President stayed away this Easter weekend as peace activists converged from around the country.

On Good Friday morning, we gather on the small triangle of dirt where Cindy Sheehan asked the world why her son Casey died – “For What Noble Cause?” We then march single file past the point where the Secret Service usually blocks the road, past the entrance to Bush’s ranch with its ironic “Dead End” sign, past the Secret Service enclave, the peaceful pastures, the wildflowers, the calves and spirited horses, arriving finally at our destination, Camp Casey Two.

Fourteen people lead the march with large wooden crosses. Sheehan carries one of them. We stop 14 times. Each time a station of the cross is observed: Jesus falls, Jesus speaks to his mother, Jesus dies. The deaths in Iraq seem as close as the spring breeze.

Camp Casey Two is on a small patch of land, leased from a cousin of the disgruntled Crawford neighbor who shot his gun off last August. A field of white crosses is there, some with boots beside them, some with names on them. In a large tent, we are greeted as family and directed to a long table of food.

The faces of soldiers are on the walls, pictures of those who have died in this mistaken war. Photos of flag draped coffins are there – the ones the U.S. media doesn’t show. A large banner has a color picture of Sheehan’s son and the words, “In Loving Memory of Army Specialist Casey A. Sheehan.”

At Camp Casey, the war is personal.

Forty-one years ago, on another Easter weekend, in front of another Texas president’s ranch, I was part of a vigil to end another horrific war. It was April 17, 1965. Students for a Democratic Society had organized an antiwar march in Washington, D.C. Those of us in SDS at the University of Texas didn’t go to Washington. We went instead to Ranch Road 1 outside Johnson City, Texas, where President Lyndon Johnson had come for the Easter weekend. I was nineteen. For my generation, the Vietnam War was personal. The draft made it so.

My friends made life decisions about whether to serve or to avoid service by conscientious objection, marrying or going to Canada. The war escalated with its terrible toll of casualties. We watched with tears in our eyes as the body counts were reported on the nightly news, as Buddhist monks set themselves on fire in protest, as the defoliants fell over Vietnam’s tree canopy, as the napalm stuck to the skin of civilians, as the cluster bombs exploded in the villages. We saw in the faces of many vets what would later be called Post Traumatic Stress Disorder (PTSD). We saw the flag draped coffins return.

Better minds than mine have surely thought about how this war in Iraq is different, have wondered why the opposition in the opinion polls isn’t also in the streets. The antiwar movement I was part of in the sixties was fueled by youth. At that vigil in 1965, we were all young. Our parent’s generation told us, “You don’t understand. You haven’t lived through a war.” But the draft made the war inescapable for my generation.

Perhaps as a nation we weren’t as afflicted with attention deficit disorder then. There were only three major TV networks. We didn’t surf endless channels. We didn’t watch sound-bite news on 24-hour channels, while competing news scrolled across the bottom of the screen. We gathered in the student union to watch the nightly news. Together, we heard the body counts and saw the flag draped coffins return. We were together. We didn’t search for Internet news in isolation.

Now, I see that same sense of community in the Camp Casey tent. The Iraq vets describe it as finally coming home. Here they find each other and share their pain and anger. It is a place dominated by those most affected by the war. It is led by Gold Star Families for Peace, the families of Iraq military who have died. Other groups – Military Families Speak Out, Iraq Vets Against the War, Vietnam Veterans Against the War, and Veterans for Peace – are also represented.

In the car on the way to Camp Casey One, Tina tells her story. Her son was a first gunner at Fallujah. He was ordered to fire at a group of insurgents and then to recover weapons from the dead. She says that as he turned the bodies over, he found women and children. There was just one weapon among them all. He came back unable to look at his mother and sister. He would call Tina with a gun in his mouth to say he didn’t deserve to live. She brought him with her to an antiwar march from Mobile to New Orleans. He found other veterans like himself. Tina says it was healing for their entire family. Later, she tells her story from the stage for the first time.

At Camp Casey, the pain is palpable. Voices break. Tears fall. Families embrace each other. An Argentine man who came to this country escaping a right wing dictatorship talks about his son who died in service to his adopted country. One of the Gold Star mothers says, “It’s personal for us. But it isn’t personal for anyone else.”

That is the truth I brought home from Camp Casey.

Rev. Dr. Joseph E. Lowery arrives at Camp Casey as part of a March to Redeem the Soul of America. Rev. Lowery spoke at Coretta Scott King’s funeral and was a founder of the Southern Christian Leadership Conference with Rev. Martin Luther King, Jr. He is 84. Rev. Lowery reminds us that Martin Luther King, Jr. spoke out against the war in Vietnam on April 4, 1967, that he was shot to death on a Memphis balcony on April 4, 1968, and that Casey Sheehan died in Iraq on April 4, 2004. He draws the parallel of simple acts of courage – of Rosa Parks sitting down on a Montgomery bus, of Cindy Sheehan sitting down on a Texas ranch road. His message is the Easter message of resurrection and hope. He tells us that we are in a sacred place, a place where the soul of America can be healed.

I show Sheehan pictures of the 1965 vigil at LBJ’s ranch from Robert Pardun’s book, Prairie Radical. I tell Daniel Ellsberg about the vigil as well. On Good Friday, he got arrested for sitting in the ditch. He remembers that Paul Potter spoke to 50,000 people at that first major mobilization against the war on April 17, 1965. Ellsberg’s strongest memory, recounted in his memoir, Secrets, is that he asked his wife on their first date that weekend, 41 years ago.

At Camp Casey, we get a piece of tape with the number of dead to put on our shirt. Everyone wears 2,360 on the first day. The six is marked out on the second day. Ten more U.S. soldiers are dead. By Monday, at the University of Texas rally, the number is 2,376.

Beatriz, a member of the Gold Star Families for Peace, has come from Dallas to speak at the UT forum. Her nephew died in Iraq before his infant daughter was born. Beatriz is angry and eloquent. She says she wants Bush to have three terms – the third term in prison. She tells me that she was a Republican and a supporter of Bush until the war came home to her in a body bag.

The movement to prevent the war in Iraq was large and spirited before March of 2003. Now, it seems gut punched as the war grinds on, demoralized by Bush’s “victory” in the 2004 election. I remember in 1965, only a handful of students demonstrated on Ranch Road 1. It took years of organizing and linking struggles. It was too many years before the war’s end in 1975. Too many more names on the Vietnam Memorial. Too much more devastation and death for a small country to bear.

“I lived through Vietnam,” she says, expecting that response to dismiss me.

1 Response to Alice Embree : Easter Weekend at the Ranch