Alice Embree :
‘The Rag’ in Paris 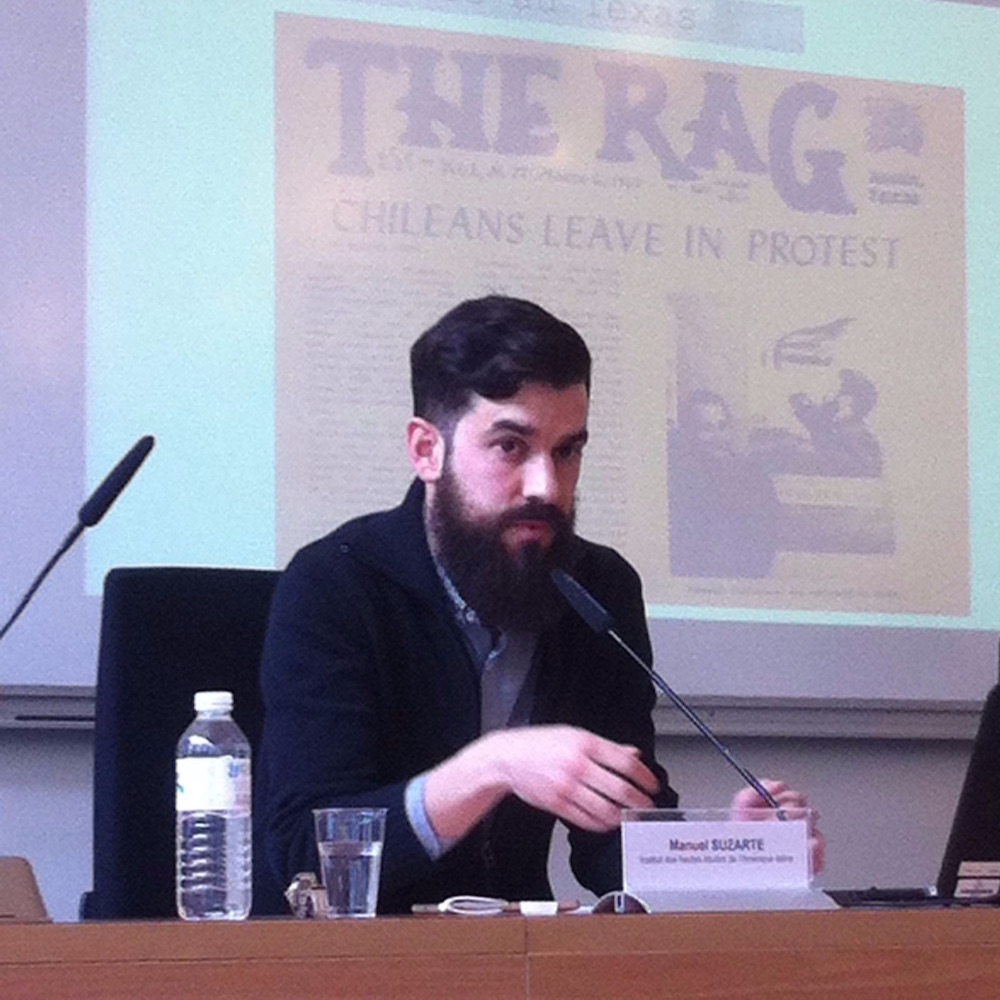 Manuel Suzarte, a doctoral student at the Sorbonne, presents a paper in Paris. On screen is the March 6, 1967 issue of The Rag.

“The Rag in Paris,” was the subject line of an e-mail from Chilean doctoral student Manuel Suzarte. He is pictured at a table. Projected on a screen behind him is an image of the cover of the March 6, 1967 Rag with the headline, “Chileans Leave in Protest.” Suzarte, a Sorbonne student, was presenting a paper in Paris, France.

In late November 2015, Manuel Suzarte followed up on a lead and asked The Rag Blog for my contact information. His thesis focused on the interaction of leftist students from the U.S. and Chile, particularly in the years preceding Salvador Allende’s 1970 election as President of Chile.

In the first issues of The Rag, he found several articles that provided clues. The first two, written by Jeff Shero, reported on Chilean students who were in Austin as part of an exchange with the University of Texas. A group of Chilean journalism students who were socialists were returning to Chile in response to suspected State Department surveillance. That was the subject of the March 6, 1967, cover story.

The next article featured an interview with the president of the student federation in Chile, a Communist, about the agreement student leaders from both countries had signed to secure the autonomy of the exchange. The third article in 1967, several months later, was about the end of the exchange. UT Board of Regents Chairman Frank Erwin had blamed me, “the Embree girl,” for the demise of the program. The fourth article, in October, was the first I one I ever wrote for The Rag. I had traveled to Chile as part of the exchange and explained my side of the story.

[The entire 11-year run of The Rag — including the articles mentioned above — is digitized in a searchable database as a part of the Independent Voices open source collection at Reveal Digital. The collection is public and can be found here.]

The Texas-Chile exchange was administered by UT’s International Office between 1959 and 1968. Groups of UT student leaders went to Chile for three weeks and UT brought Chilean student leaders to the UT campus. Funding came from the U.S. State Department. I was on the last exchange from the United States to Chile in 1967.

I spoke out against the war and voiced my support for Black Liberation.

The times had changed. International opposition to the War in Vietnam was strong, especially among students. And, as a leader of Students for a Democratic Society (SDS), I represented a student Left, what we called a “New Left.” I spoke out against the war and voiced my support for Black Liberation. Frank Erwin didn’t want that exchange of opinion.

A recent reunion of Texas participants brought Manuel Suzarte to Austin. The gathering included past presidents of the UT student body and editors of the Daily Texan. For almost every Texas participant, the travel to Chile was significant. It was for me as well. I went on to work with the North American Congress on Latin America (NACLA) in New York and with the Austin Committee for Human Rights in Chile for more than a decade after the brutal military coup that took down the Chilean government of Allende and imposed a dictatorship.

Some of the Chilean participants in the exchange who had supported Allende were murdered, some were arrested, many went into exile. Manuel Suzarte, decades later, is trying to capture the story of the exchange. He’s been able to interview many of the participants. The history captured on the pages of The Rag provided him with important clues that the history existed. 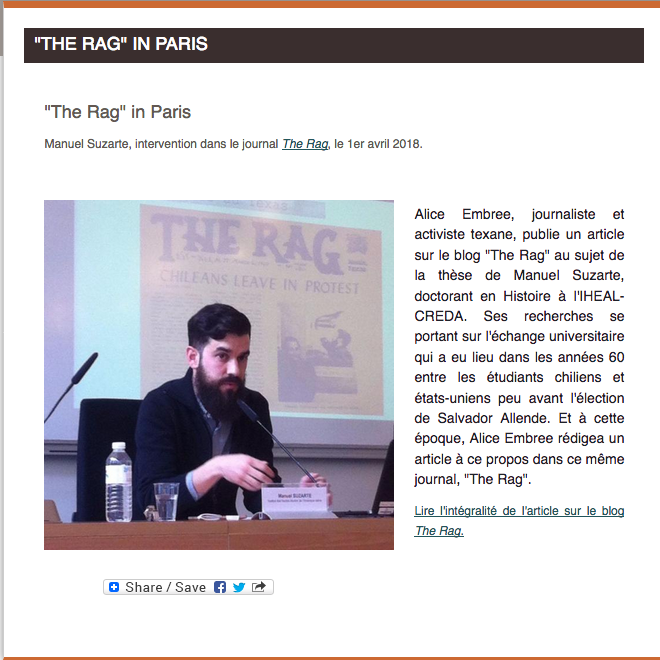 The article by Alice Embree posted at The Rag Blog April 1, 2018, and involving an article that appeared in the original Rag in an issue dated March 6, 1967, was summarized and linked to from a site connected with the Sorbonne in Paris, after the publication of our original article. Got all that? Link to Paris piece here.

4 Responses to Alice Embree :
‘The Rag’ in Paris