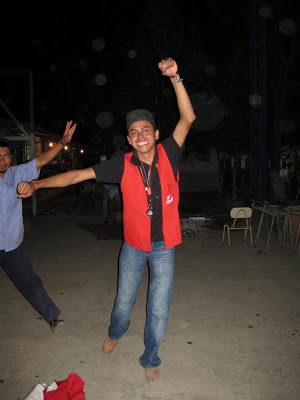 ‘Venceremos!’ he shouted, and asked that we put his picture on the internet. Photo by Alice Embree / The Rag Blog.
The face of victory

It was in the small, dusty town of Rosario de Mora that I witnessed the historic election in El Salvador.

[This is the third in a four-part series on El Salvador by The Rag Blog’s Alice Embree, who was part of Committee in Solidarity with the People of El Salvador (CISPES), an international team observing the March 15, 2009, Salvadoran elections. For a live report, join the author and others at Monkey Wrench Books in Austin on Wednesday, May 13, at 7 p.m. For the previous articles in this series, go here.]

It was in the small, dusty town of Rosario de Mora that I witnessed the historic election in El Salvador. Our seventy-member CISPES delegation was trained as election observers by an organization called FUNDASPAD. In the air-conditioned splendor of the San Salvador Radisson, we presented our passports, were photographed and given credential badges. FUNDASPAD issued each of us a vest, cap, and canvas tote bag with the election code and observer rules. We were among 4,000 international observers that included delegations from the Organization of American States (OAS) and the European Union (EU). Although the election was largely invisible to U.S. media, the rest of the world knew history was in the making.

Decked out in our tan attire designating us as “Observacion Internacional de Eleccion 2009,” we were divided into teams. My four-person team was assigned to Rosario de Mora. Rosario had one election center in a school with sixteen voting tables. We would each have four tables to watch. Annie from Portland was designated our leader because of her Spanish skill and previous observer experience. We paid a visit to the town the day before the election and introduced ourselves to both FMLN and ARENA representatives. Then we were allowed to see the school. Annie expressed concern about an elevated ramp entrance close to a voting booth location because someone could look down to see people as they voted. The next day the arrangement of tables was slightly altered in response to the concern.

On election day, March 15, we left San Salvador at 3 a.m., dropping one team in nearby San Tomas, and proceeding down the winding, bumpy rural road to Rosario. We introduced ourselves to the police stationed at the polls and were allowed to stash our water bottles in their classroom headquarters. At 4:30 a.m. we entered the election site. Across the street, there was already a buzz of activity at the FMLN headquarters and by 5:00 all of the designated FMLN election workers were lined up in table order ready to enter.

In the U.S. we are accustomed to machines and a few, often older, election workers overseeing several booths. It was humbling to observe the low-tech system and the degree of citizen involvement. They had cardboard ballot booths and ballot boxes. There was nothing flashy about the material, but the election workers in Rosario were dedicated. It was as though everyone knew they were involved in an historic decision.

In the January municipal and legislative referendum, more parties had been represented, but the presidential election had only two candidates. Each voting table had four election workers seated — a president, secretary and two “vocals” to check the registry list. They alternated roles; an FMLN president at odd-numbered tables, ARENA president at even-numbered tables. Each table could have four vigilantes or election observers. Those seated at the table didn’t wear party designations, but the vigilantes had on their party colors – red FMLN vests and red, white and blue ARENA vests.

At 7:00 the voters began to arrive. It got packed after church with families and children in their Sunday best. Vote buying had been reported in previous elections at a site several blocks from the polls. We had been told to be vigilant about people trying to photograph their ballots — an indication that they were getting paid and needed proof.

People walked or came in the backs of pick up trucks to vote. The elderly often stood baffled by the canvas curtains on the cardboard booth, trying to figure out if they should put their head through or over the curtains. This was a new feature recommended by the OAS to ensure privacy. These were my images: dedicated election workers, people who couldn’t read or write placing their inked finger near their registry picture, a blind man escorted by his grandchild. With our slick election machines, we are distanced from that simple act of placing a mark on a ballot.

The transparency of the count at each table was also impressive. The ballots were removed from the box by the table president, shown to everyone at the table and placed with an FMLN representative or with an ARENA representative. Sometimes the mark was unclear, an “X” in the middle that didn’t touch either party insignia or touched both. Votes could be nullified if they weren’t clear. Everyone would enter the debate, occasionally heated, until it was resolved.

Since each party was represented equally, there had been concern over resolving disputes. But, disputes were always resolved after vigorous debate. Rosario de Mora wasn’t expected to go to the FMLN. Out of the nearly 5,000 votes cast, 53% went to ARENA. But four tables went to the FMLN. As the counts were finalized for those four tables, a huge cheer would go up at the table and be picked up by FMLN workers at all the other tables.

After the counts were completed, the election workers at each table entered them on to the “Actas,” the official results. Unused ballots were stamped to invalidate them. We observed the faxing of the sixteen “Actas,” checking the totals we had written down at each table against the pages faxed to make sure there were no substitutions. The election workers began to clean up the schoolyard.

It was a long day. We called in to FESPAD at designated times with our status reports, responding to a series of questions on timeliness, training, credentials, lines, observer and police presence and approximate vote totals. We checked totals each hour to make sure ballot numbers matched registry tallies. We offered occasional “observations” when we saw minor infractions. The EU sent two observers who stayed for two hours. The OAS had an observer there most of the day. Our team stayed from 4:30 a.m. until the results were faxed and we left when the ballots were taken from the schoolyard to be escorted by police to San Salvador.

At about 7:00 p.m., two hours after the polls closed, we were getting our backpacks and water bottles ready to leave. By then, election news was filtering in to the FMLN party headquarters across the street. They knew where they were winning and how large the turnout was.

An FMLN “vigilante,” or observer, in his red FMLN vest told us that the FMLN had won. “Venceremos!” he shouted, literally jumping with excitement. That day we were neutral election observers. All I could do was take his picture and he wanted me to put it on the Internet. For me, his exuberant joy is the face of victory.

And Alice Embree on El Salvador : Reflections on a People’s Victory, Part 2: Organizing by Alice Embree / The Rag Blog / May 12, 2009

1 Response to Alice Embree on El Salvador : Reflections on a People’s Victory, Part 3: Face of Victory