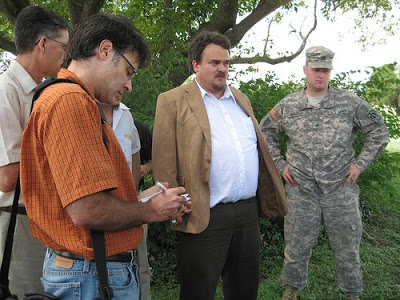 I can not say that a year in prison doesn’t scare me. I am terrified… (But) it would be scarier still to know that my fellow soldiers who feel as we feel would never find out what we are trying to accomplish. — Travis Bishop

See ‘Protesters support Bishop and Agosto’ by Alice Embree, Below.

In the second court martial in two weeks, another Fort Hood soldier was sentenced on August 14th for refusing to deploy to Afghanistan.

Sgt. Travis Bishop was brought before special court martial proceedings, found guilty and sentenced to one year in prison. His rank and pay were reduced. He is expected to be held in the Bell County Correctional Unit before serving his sentence in a military jail. His discharge status will be determined later. Because Sgt. Bishop has a prior honorable discharge, his GI benefits may not be reduced.

Sgt. Bishop faced four charges: willful disobedience of a Non-Commissioned Officer, absence without leave and two counts of missing movement. The charges were more serious than those faced by Spc. Victor Agosto on August 5th. Agosto’s case was resolved in a summary court martial and he is serving a one month sentence in the Bell County Correctional Unit.

The courtroom resembled a civil courtroom with the judge in black robes. An Army defense attorney was seated with Bishop and his civilian defense attorney, James Branum. The panel, however, was hardly a peer panel. The jury seats were filled by eight Colonels, Lieutenant Colonels and Majors who had to be warned once not to fall asleep while the Judge read instructions.

A Fort Hood Public Affairs representative told Bishop supporters during a recess that Bishop was being tried in the same courtroom where Army Staff Sgt. Shane Werst had faced a court martial for shooting an unarmed Iraqi citizen. “Five privates turned a dime on him,” he said. Despite testimony that soldiers were ordered to plant a gun on the Iraqi citizen to make the death appear to be self defense, Werst was acquitted May 26, 2005. Bishop’s sentence for not deploying is a sobering contrast.

Bishop’s court martial began on Thursday and Bishop’s defense attorney and supporters had expected the arraignment, designation of a jury panel and testimony of one witness to be brief. Instead, the trial began in earnest and lasted five hours. At one point on Thursday, supporter Cynthia Thomas was asked by a Killeen police officer and an Army MP to leave the courtroom and explain her relationship with the defendant. Thomas asked if she were being detained and to speak to her attorney. She was not stopped from returning to the courtroom.

The prosecution brought Captain Chrisopher Hall in to testify that the absence of Travis Bishop from his unit had caused hardship to his unit. The defense presented four witnesses who testified to Travis Bishop’s sincerity of beliefs. Bishop filed a request for Conscientious Objector status in late May and the request is still pending.

Charles Luther, a defense witness with a background as a lay Baptist minister, spoke of Bishop’s religious beliefs. The defense attorney established that psychiatrist, Lt. Col. Adams, to whom Bishop had been referred, approved Bishop’s Conscientious Objector claim and that it was one of only two claims in his ten years that Adams had approved.

In a surprise moment at the end of testimony, the Prosecution decided to call Lt. Colonel Ronald Leininger to the stand. Leininger was the Brigade Chaplain to whom Bishop was referred for pastoral counseling. Bishop has described his deep disappointment in speaking to someone he thought would be attentive to his religious beliefs. Bishop said the Chaplain reduced his interview time and interrupted the interview repeatedly by receiving phone calls.

In the statement issued by the Chaplain after his visit with Bishop, he focused almost no attention on Bishop’s religious beliefs. Instead, he wrote that Bishop had been coached by Iraq Veterans Against the War and other antiwar activists. He went further to say that the affiliation that best described Bishop’s religious heritage was “Conservative Evangelicals” who the Captain said are “generally pro-military service with no pacifist tendencies in doctrine or practice. In fact, they make good soldiers.”

Bishop has received letters of support from a number of pastors who cite their church’s doctrine and practice supporting conscientious objection to war.

The court was recessed as the panel considered the verdict for about one hour. They found Sgt. Bishop guilty. In the sentencing phase, the civilian defense attorney, James Branum, asked for a three months sentence in light of Sgt. Bishop’s sincerity and previous good conduct, including a fourteen month deployment in Iraq. In particular, Branum focused on the fact that soldiers are never given information about their rights to Conscientious Objection. Branum said that a soldier who changes his or her belief about war doesn’t understand that there are options.

Maj. Matthew McDonald, who served as the judge, discounted the relevancy of whether Bishop was notified about his right to file for CO status. McDonald was quoted in the Killeen Daily Herald (8/14/09) as saying: “If every soldier in the Army who disobeyed an order could claim it was because they weren’t notified of conscientious objector status, we probably wouldn’t have a military any more.”

Prior to sentencing, Bishop’s testimony was forceful and moving. He cited several articles that protect a soldiers rights and noted that soldiers often are not informed of their rights, but that doesn’t relieve the Army of its responsibility to honor those rights. Bishop said that the right to pursue a claim of Conscientious Objection requires protection. He said that he was unaware that he could pursue a claim of Conscientious Objection until right before his deployment.

“The truth is, as soon as I discovered this process [C.O.] existed, I acted upon it. I left because I did not feel that I would have a sympathetic, understanding command structure to fully take my problems to, and also to give myself time to prepare for my C.O. application process, and the legal battle I’m currently fighting. These are not excuses. These are explanations. My hope is that you truly treat them as such during your sentencing deliberations.”

After being sentenced to the maximum jail term allowable under a Special Court Martial, Bishop had time to handwrite a note:

“To everyone who still cares: I can not say that a year in prison doesn’t scare me. I am terrified… But still, though I am terrified, it would be scarier still to know that my fellow soldiers who feel as we feel would never find out what we are trying to accomplish… Everyone who hears or reads this should know that I love you all, and my life is forever changed because of you. Victor and myself are starting something and it is now up to all of you to continue on. With all my heart. Travis.”

As Bishop was escorted from the Justice Center to a waiting van, supporters who were active duty soldiers or veterans stood at attention and saluted. Hands cuffed together, Bishop flashed a peace sign in return. 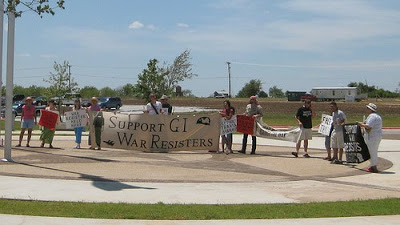 Demonstrators outside the Bell County Correctional Unit where Victor Agosto and Travis Bishop are being held. Photo by Alice Embree / The Rag Blog.

Victor Agosto is incarcerated at the Bell County facility after being court martialed August 5th for refusing to deploy to Afghanistan. Agosto was sentenced to one month. Travis Bishop will be held in Bell County for about two weeks before his transfer to a military prison. Bishop was court martialed August 14th and received a sentence of one year.

Supporters plan to be present every Saturday while the resisters are in jail at this facility. For more information, go to the Under the Hood Cafe website.

9 Responses to Alice Embree : The Court Martial of Travis Bishop