Alleged Vote-Rigger Michael Connell Was Warned About Sabotage Before Crash 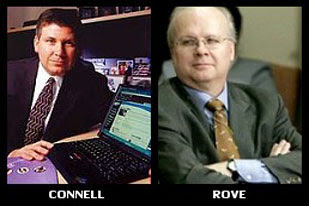 For more background on this story, see Michael Connell : The Suspicious Death of the Man Who May Have Rigged the 2000 Election by Bob Fitrakis and Harvey Wasserman, posted earlier today, Dec. 22, 2008, on The Rag Blog.

The Republican consultant accused of involvement in alleged vote-rigging in Ohio in 2004 was warned that his plane might be sabotaged before his death in a crash Friday night, according to a Cleveland CBS affiliate.

45-year-old Republican operative Michael Connell was killed when his single-passenger plane crashed Friday into a home in a suburb of Akron, Ohio. The consultant was called to testify in federal court regarding a lawsuit alleging that he took part in tampering with Ohio’s voting results in the 2004 election.

Without getting into specific details, 19 Action News reporter Blake Renault reported Sunday evening that 45-year-old Republican operative and experienced pilot had been warned not to fly his plane in the days before the crash.

“Connell…was apparently told by a close friend not to fly his plane because his plane might be sabotaged,” Renault said. “And twice in the last two months Connell, who is an experienced pilot, cancelled two flights because of suspicious problems with his plane.”

The National Transportation Safety Board and Federal Aviation Administration are now investigating the crash. According to the Cleveland Plain Dealer, no new information has been made available since the incident occurred.

Connell was the subject of a lawsuit by liberal lawyer Clifford Arnebeck, perhaps most well known for suing on behalf of 37 Ohio residents to block Bush’s electoral college victory in 2004. Arnebeck had alleged Connell’s involvement in a ploy to “flip” votes from then Democratic nominee Sen. John Kerry to then-President George W. Bush.

Connell was ordered to testify in the suit in October, and told a federal court that he had no involvement and knew of no plan to switch votes in Ohio in 2004.

The Plain Dealer made no mention at all of the suit in their article Monday.

Arnebeck warned the Justice Department that Connell’s safety was in jeopardy earlier this year. In July, he wrote an email to Attorney General Michael Mukasey, requesting witness protection for the GOP operative, which was carbon copied to Democratic Congressmen John Conyers, Jr. (D-MI) and Rep. Dennis Kucinich (D-OH), who were sympathetic to his 2004 lawsuit over Ohio’s electoral votes.

“I have informed court chambers and am in the process of informing the Ohio Attorney General’s and US Attorney’s offices in Columbus for the purpose, among other things, of seeking protection for Mr. Connell and his family from this reported attempt to intimidate a witness,” Arnebeck wrote. “Because of the serious engagement in this matter that began in 2000 of the Ohio Statehouse Press Corps, 60 Minutes, the New York Times, Wall Street Journal, C-Span and Jim VandeHei, and the public’s right to know of gross attempts to subvert the rule of law, I am forwarding this information to them, as well.”

Connell’s exploits as a top GOP IT ‘guru’ have been well documented by RAW STORY’s investigative team.

The interest in Mike Connell stems from his association with a firm called GovTech, which he had spun off from his own New Media Communications under his wife Heather Connell’s name. GovTech was hired by Ohio Secretary of State Kenneth Blackwell to set up an official election website at election.sos.state.oh.us to present the 2004 presidential returns as they came in.

Connell is a long-time GOP operative, whose New Media Communications provided web services for the Bush-Cheney ’04 campaign, the US Chamber of Commerce, the Republican National Committee and many Republican candidates.

Alternative media group ePlubibus Media further discovered in November 2006 that election.sos.state.oh.us was hosted on the servers of a company in Chattanooga, TN called SmarTech, which also provided hosting for a long list of Republican Internet domains.

“He has flown his private plane for years without incident,” Alexandrovna wrote. “I know he was going to DC last night, but I don’t know why. He apparently ran out of gas, something I find hard to believe. I am not saying that this was a hit nor am I resigned to this being simply an accident either. I am no expert on aviation and cannot provide an opinion on the matter. What I am saying, however, is that given the context, this event needs to be examined carefully.”

RUSH TRANSCRIPT: “The fatal plane crash of Michael Connell was certainly untimely. The 45-year-old local man was accused of rigging the 2004 election for President Bush, a claim that Connell denied under oath. But under closer examination from civil attorney Clifford Arnebeck, wanted Connell placed under federal protection. Arnebeck was worried that if Connell told all that he knew about President Bush and the 2004 campaign, Connell’s life would be in jeopardy. Arnebeck said that he received confidential information that Republican operative Karl Rove threatened Connell and his wife if Connell told all that he knew.

“So who exactly is Michael Connell? Well he worked here as a Republican computer specialist and consultant. Basically he is accused of taking votes in 2004 from then-candidate John Kerry and diverting them to president bush throughout the state of Ohio. And last month under oath in a federal court, Connell denied having any knowledge of manipulating votes. Records show that the Bush campaign paid Connell’s business $800,000 in 2004, but it’s unclear for what. Connell though was apparently told by a close friend not to fly his plane because his plane might be sabotaged. And twice in the last two months Connell, who is an experienced pilot, canceled two flights because of suspicious problems with his plane.

“And now yet another problem was … but this one took his life. It’s too early to tell if the federal investigation into Connell’s death has any kind of ties from the work he provided from this office to the president.”