Allen Young :
BOOKS | The story of an eccentric

This unique tale is lovingly told by Clare Green. 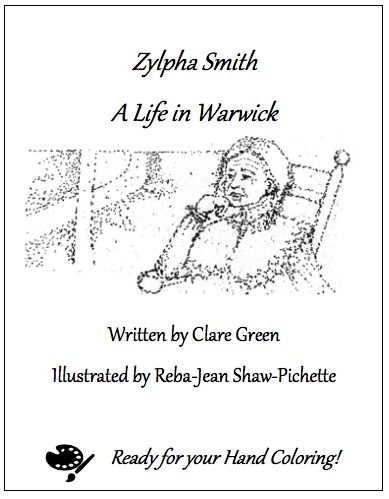 Wikipedia defines an eccentric person as “unconventional and slightly strange” and suggests there is no judgment attached to the word “not demonstrably maladaptive.”

Zylpha Smith (1815-1885), who lived and died in the sparsely populated Western Massachusetts town of Warwick was such a person, and her well-researched story has been lovingly told in an eccentric little 22-page five-inch by four-inch pamphlet. More about Zylpha follows.

The author is Clare Green of Warwick (a retired elementary school teacher and amateur naturalist) and there are unique pointillist illustrations by Reba-Jean Shaw-Pichette of Shelburne, Mass. The two creators have common interests in local history, including membership in local historical societies and working as “living history educators.” (If you’ve gone to historic sites, such as Old Sturbridge Village in Massachusetts, you’ve seen costumed living history educators in action.)

Over several years prior to the publication of the pamphlet, Clare has portrayed Zylpha at community events. What makes Clare’s portrayal of Zylpha’s life interesting and informative to us is not only Zylpha’s reclusive way of life in a bygone era, but also the writer’s awareness of social history, particular as it pertains to women and the impoverished. 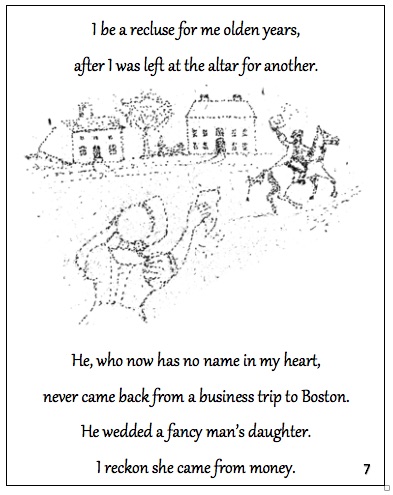 An illustration in the booklet shows Zylpha with a bonnet waving at a man in a hat riding away on a horse. Clare imagines Zylpha in her odd speech pattern (“too ashamed to show me face”) narrating what happened:

I be a recluse for me olden years, after I was left at the altar for another. He, who now has no name in my heart, never came back from a business trip to Boston. He wedded a fancy man’s daughter. I reckon she came from money.

Zylpha rejects charity, and with considerable hard labor returns a pile of firewood that had been given to her as a gift. She did accept donated food from three women known for establishing a town park, and comments, “Those ladies were ahead of their time, like Lucy Stone who said ‘women are more than merely appendages of men.’”

Lucy Stone (1818-1893) was an abolitionist and advocate of women’s rights who came from the Central Massachsetts town of West Brookfield, only 40 miles from Warwick, and who often organized and spoke around the Commonwealth.

Zylpha’s sister and her father – labeled by Green as a “pauper” — died of consumption (an old name for tuberculosis). Near the end of her life, she was compelled to sell her land and live in an “almshouse,” described by her as “decent enough but I sure missed me brook, me cabin, me land and me cow, and all me memories.”

You can obtain the pamphlet, Zylpha Smith: A Life in Warwick, by mailing a request and a donation to the Warwick Historical Society (suggested payment is “free to $5”). Address to: Clare Green, 71 Athol Rd, Warwick, MA 01378.

[Allen Young has lived in rural North Central Massachusetts since 1973 and is an active member of several local environmental organizations. Young worked for Liberation News Service in Washington, D.C., and New York City, from 1967 to 1970. He has been an activist-writer in the New Left and gay liberation movements, including numerous items published in The Rag Blog. Retired since 1999, he was a reporter and assistant editor of the Athol (Mass.) Daily News, and director of community relations for the Athol Memorial Hospital. He is author or editor of 15 books, including his 2018 autobiography, Left, Gay & Green; A Writer’s Life — and a review of this book can be found in The Rag Blog archives.]