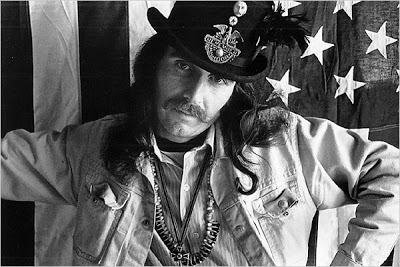 Alton Kelley, whose psychedelic concert posters for artists like the Grateful Dead, Jimi Hendrix, and Big Brother and the Holding Company helped define the visual style of the 1960s counterculture, died on Sunday at his home in Petaluma, Calif. He was 67.

The cause was complications of osteoporosis, said his wife, Marguerite Trousdale Kelley.

Mr. Kelley and his longtime collaborator, Stanley Mouse, combined sinuous Art Nouveau lettering and outré images plucked from sources near and far to create the visual equivalent of an acid trip. A 19th-century engraving from “The Rubaiyat of Omar Khayyam” inspired a famous poster for a Grateful Dead concert at the Avalon Ballroom in 1966 that showed a skeleton wearing a garland of roses on its skull and holding a wreath of roses on its left arm. 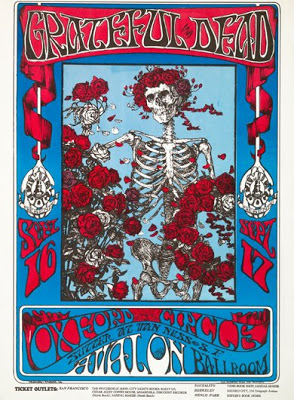 Mr. Kelley was born in Houlton, Me., and grew up in Connecticut, where his parents moved to work in defense plants during World War II. His mother, a former schoolteacher, encouraged him to study art, and for a time he attended art schools in Philadelphia and New York, but his real passion was racing motorcycles and hot rods. He applied his artistic training to painting pinstripes on motorcycle gas tanks.

After working as a welder at the Sikorsky helicopter plant in Stratford, Conn., he moved to San Francisco in 1964, settling into the Haight-Ashbury neighborhood. With a group of friends he helped stage concerts at the Red Dog Saloon in Virginia City, Nev., by the Charlatans, a electric folk-rock band. On returning to San Francisco, he became a founding member of the Family Dog, a loose confederation of artists, poets, musicians and other free spirits who put on the some of the earliest psychedelic dance concerts, first at the Longshoremen’s Hall and later at the Avalon Ballroom.

Mr. Kelley was in charge of promoting the concerts with posters and flyers, but his drafting ability was weak. That shortcoming became less of a problem in early 1966, when he teamed up with Stanley Miller, a hot-rod artist from Detroit who worked under the last name Mouse. The two formed Mouse Studios, with Mr. Kelley contributing layout and images and Mr. Mouse doing the distinctive lettering and drafting work. Often, they took trips to the public library in a search for images from books, magazines and photographs.

“Stanley and I had no idea what we were doing,” Mr. Kelley told The San Francisco Chronicle last year. “But we went ahead and looked at American Indian stuff, Chinese stuff, Art Nouveau, Art Déco, Modern, Bauhaus, whatever.”

One of their first posters, for a concert headlined by Big Brother and the Holding Company, reproduced the logo for Zig-Zag cigarette papers, used widely for rolling marijuana joints.

From 1966 to 1969, Mr. Kelley worked on more than 150 posters for concerts at the Avalon Ballroom and the Fillmore, publicizing the most famous bands and artists of the era, among them Quicksilver Messenger Service, the Butterfield Blues Band and Moby Grape, as well as the Dead, Big Brother and the Holding Company, Jimi Hendrix, and Country Joe and the Fish. They created three posters for concerts headlined by Bo Diddley, who died on Monday.

With time, Mr. Kelley’s drawing improved, and the partners virtually fused into a poster-generating unit.

“Kelley would work on the left side of the drawing table and Mouse on the Right,” said Paul Grushkin, the author of “The Art of Rock: Posters From Presley to Punk” and a longtime friend of both men. “They turned out a poster a week.”

At the time, the posters were put up on telephone poles. Everyone who attended a concert at the Avalon received a free poster advertising the next show on the way out the door. Some were sold in head shops for a few dollars. Today, mint-condition posters by Mr. Kelley and Mr. Mouse can command prices of $5,000 or more.

With the waning of the 1960s, Mr. Kelley and Mr. Mouse diversified. They formed Monster, a T-shirt company, in the mid-1970s. They also designed the Pegasus-image cover for the Steve Miller album “Book of Dreams” and several albums for Journey in the 1980s.

In their final collaboration, in March of this year, they contributed the cover art for the program at the induction ceremony at the Rock and Roll Hall of Fame. On his own, Mr. Kelley designed posters and created hot-rod paintings that he transferred to T-shirts.

In addition to his wife, Mr. Kelley is survived by three children, Patty Kelley of San Diego, Yossarian Kelley of Seattle and China Bacosa of Herald, Calif.; two grandchildren; and his mother, Annie Kelley, and a sister, Kathy Verespy, both of Trumbull, Conn.

“Kelley had the unique ability to translate the music being played into these amazing images that captured the spirit of who we were and what the music was all about,” said the Grateful Dead drummer Mickey Hart. “He was a visual alchemist — skulls and roses, skeletons in full flight, cryptic alphabets, nothing was too strange for his imagination to conjure.”