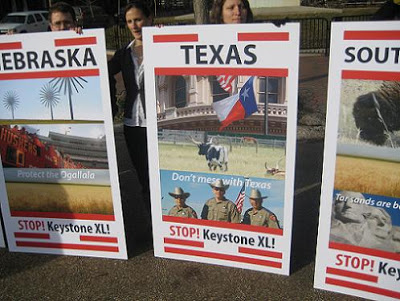 Nebraska farmers, Alberta tribal elders, Texas lumbermen, and young adults from everywhere who understand that their very future is at risk — these and many more will present their symbolic plea to President Obama: do not approve the permit to build the Keystone XL Pipeline, which is set to transport crude mined from the Alberta, Canada, tar sands to Port Arthur, Texas.

This protest represents the final link in a chain of events that have embroiled the State Department, charged by law with recommending a “Yay” or “Nay” to the President, in a swirl of corruption allegations. Freedom of Information Act requests have revealed an overly cozy relationship between the pipeline contractor, TransCanada, and the State Department, exemplified by Hillary Clinton’s deputy campaign manager, Paul Elliott, being hired by the company as its chief lobbyist.

It was he who facilitated what should have been flagged as an astoundingly blatant conflict-of-interest, and therefore, he who prompts this exploration of “regulatory capture.”

For those who might not be familiar with the phrase, regulatory capture is the process by which regulators — in this instance, the State Department — lose track of their responsibilities, and grow to identify with, and therefore protect, those whom they are tasked with regulating.

It occurs on every level; it’s the municipal code inspector accepting the plumber’s invitation to go fishing on his new bass boat — and subsequently failing to flag his substandard shower drain, because, after all, they’re “buds.” What occurred at the State Department was not all that different, and certainly no less calculated; influence was purchased, and “we the people” were harmed.

The extent of that harm has yet to be determined. What is known is that the State Department chose a subcontractor to conduct public meetings, compile comments, produce both environmental and historical-preservation impact studies, create a website, and collect citizens’ emails on the topic; incredibly, they asked TransCanada to make a recommendation, and when they came up with Cardno ENTRIX, their own long-time subcontractor, already under fire for its inadequate environmental damage assessments, there were no objections.

There was no surprise, either, when the Federal Environmental Impact Statement found “no adverse effects.” 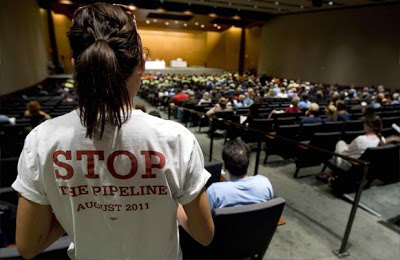 Jackelin Trevino of Austin speaks out against the Keystone XL pipeline. Photo by Ricardo B. Brazziell / Austin American-Statesman.
What followed should have been a serious discussion on the wisdom of transporting corrosive tar-sands oil across the Canadian border, through major aquifers and reservoirs, across sensitive archaeological sites, and into drought-ravaged forests and the Gulf Coast.

Climatologists could have offered their expertise on the toxicity of emissions from the dirty oil that will be refined from this resource; hydrologists could have explained that the amount of water required in the refinery process makes it a product that drought-stricken Texas can ill afford. Energy experts could have explained that this oil would not make the U.S. energy-independent, that in fact, the oil is to be sold on world markets. And academics could have offerred a far different assessment of the number of jobs that will be gained than what TransCanada has been claiming.

But other than the voices raised by the hundreds of environmentalists, including several noted scientists who were arrested in summer protests outside the White House, there was far too little examination of the consequences. In public hearings held in places like Port Arthur and Austin, pipeline supporters in brightly colored t-shirts were bussed in from around the country and paid for their time.

Their outbursts rapidly turned the Port Arthur hearing into a pep rally, and their domination of available time reduced others’ speaking opportunities. And Cardno ENTRIX? Their employees registered speakers, kept time clocks, recorded the proceedings, and generally made it clear that they were in charge. A State Department employee seemed a mere symbolic presence as she robotically smiled and thanked speakers.

The Austin hearing lacked much of the cheerleading, but it produced its own controversies in the manner in which it allotted citizens time to speak. A so-called elected official, actually a recent Perry appointee, was allowed to speak ahead of others, and yet dozens of citizens who had stood in line for hours were never given an opportunity.

One man was arrested for protesting — and for speaking the truth — about Cardno ENTRIX’s involvement.

The hearing in the nation’s capital brought out additional facts about this developing cronyism scandal, and about the parts played by TransCanada and the State Department. At that late date, it was merely an afterthought. The fix seems to be in. But many questions remain, chief among them — will President Obama cut through the web of lies spun by proponents of the pipeline? Will he vote with the people, and against the greedy interests of Big Oil — and take action against this latest example of regulatory capture that is strangling our democracy?

We must take action as Americans to ensure that he does. As noted climatologist Dr. James Hansen has said, it will be “game over” for the next generations to mitigate the disaster that is climate change if this project is approved. To give our children and grandchildren a chance to live out their lives, we have to end this threat to their future, and to the future of the planet. It’s truly now, or never.

[Alyssa Burgin is the Executive Director of The Texas Drought Project. She attended the Port Arthur, Austin, and Washington, D.C. hearings. She asks that all readers call the White House comment line at 202-456-1111 and prevail upon the President to say NO.]