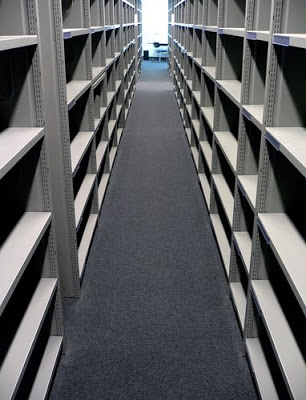 Amazon and other e-media aggregators know that digital text is the irrational exuberance of the day, and so are seizing the opportunity to codify, commodify, and control access for tomorrow.

[Emily Walshe is a librarian and professor at Long Island University in New York. This article originally appeared in the March 18, 2009, issue of the Christian Science Monitor.]

BROOKVILLE, N.Y. – All you really need to know about the dangers of digital commodification you learned in kindergarten.

Think back. Remember swapping your baloney sandwich for Jell-o pudding? Now, imagine handing over your sandwich and getting just a spoon.

Yet that’s just what millions of Americans are doing every day when they read “books” on Kindle, Amazon’s e-reading device. In our rush to adopt new technologies, we have too readily surrendered ownership in favor of its twisted sister, access.

Web 2.0 and its culture of collaboration supposedly unleashed a sharing society. But we can share only what we own. And as more and more content gets digitized, commercialized, and monopolized, our cultural integrity is threatened. The free and balanced flow of information that gives shape to democratic society is jeopardized.

For now, though, Kindle is on fire in the marketplace. Who could resist reading “what you want, when you want it?” Access to more than 240,000 books is just seconds away. And its “revolutionary electronic-paper display … looks and reads like real paper.”

But it comes with restrictions: You can’t resell or share your books – because you don’t own them. You can download only from Amazon’s store, making it difficult to read anything that is not routed through Amazon first. You’re not buying a book; you’re buying access to a book. No, it’s not like borrowing a book from a library, because there is no public investment. It’s like taking an interest-only mortgage out on intellectual property.

If our flailing economy is to teach us anything, it might be that an on-demand world of universal access (with words like lease, licensure, and liquidity) gets us into trouble. Amazon and other e-media aggregators know that digital text is the irrational exuberance of the day, and so are seizing the opportunity to codify, commodify, and control access for tomorrow. But access doesn’t “look and read” like printed paper at all – just ask any forlorn investor. Access is useless currency.

Why is this important? Because Kindle is the kind of technology that challenges media freedom and restricts media pluralism. It exacerbates what historian William Leach calls “the landscape of the temporary”: a hyper mobile and rootless society that prefers access to ownership. Such a society is vulnerable to the dangers of selective censorship and control.

Digital rights management (DRM), which Kindle uses to lock in its library, raises critical questions about the nature of property and identity in digital culture. Culture plays a large role – in some ways, larger than government – in shaping who we are as individuals in a society. The First Amendment protects our right to participate in the production of that culture. The widespread commodification of access is shaping nearly every aspect of modern citizenship. There are benefits, to be sure, but this transformation also poses a big-time threat to free expression and assembly.

When Facebook, for example, proposed revisions to its terms of service last month – claiming ownership of user profiles and personal data – the successful backlash it spawned caused complex (even existential) ideas about property, identity, and capitulation to bubble up: Is my Facebook profile the essence of who I am? If so, who owns me?

The hallmark of a constitutionally governed society, after all, is the acknowledgment that we are the authors of our own experience. In an Internet age, this is manifest not only in published works, but also an ever-evolving host of user-generated content (Twitter, Blogger, Facebook, YouTube, etc.). If service providers lay claim to digital content now, how will it all end?

Print may be dying, but the idea of print would be the more critical demise: the idea that there needs to be a record – an artifact of permanence, residence, and posterity – that is independent of some well-appointed thingamajig in order to be seen, touched, understood, or wholly possessed.

“You don’t have to burn books to destroy a culture,” Ray Bradbury once said. “Just get people to stop reading them.”

To kindle, we must remember, is to set fire to. The combustible power of this device (and others like it) lies in their quiet but constant claim to intangible, algorithmic capital. What the Kindle should be igniting is serious debate on the fundamental, inalienable right to property in a digital age – and clarifying what’s yours, mine, and ours.

It should strike a match against the winner-take-all casino economies that this kind of technology engenders; revitalize American libraries and other social institutions in their quest to preserve the doctrines of fair use and first sale (which allow for free and lawful sharing); and finally, spark Americans to consider the extent to which they are handing over their baloney sandwich for a plastic spoon.

Like a lot of people, I’m a sucker for a good book. But not at the expense of freedom, or foreclosure of thought.

1 Response to Amazon’s Kindle: A New Way to Burn Books?