Americans: Cowering from Our Responsibility to Defend the Constitution 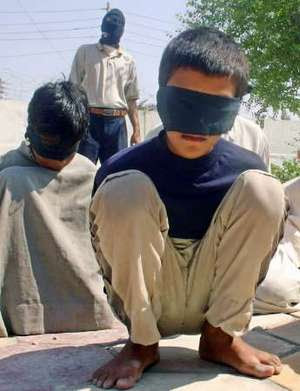 Surely nothing that President Bush has done in his two wretched terms of office — not the invasion and destruction of Iraq, not the overturning of the five-centuries-old tradition of habeas corpus, not his authorization and encouragement of torture, not his campaign of domestic spying — nothing, can compare in its ugliness as his approval, as commander in chief, of the imprisoning of over 2500 children.

According to the US government’s own figures, that is how many kids 17 years and younger have been held since 2001 as “enemy combatants” — often for over a year, and sometimes for over five years. At least eight of those children, some reportedly as young as 10, were held at Guantanamo. They even had a special camp for them there: Camp Iguana. One of those kids committed suicide at the age of 21, after spending five years in confinement at Guantanamo. (Ironically and tragically, that particular victim of the president’s criminal policy, had been determined by the Pentagon to have been innocent only two weeks before he took his own life, but nobody bothered to tell him he was slated for release and a return home to Afghanistan.)

I say Bush’s behavior is criminal because since 1949, under the Geneva Conventions signed and adopted by the US, and incorporated into US law under the Constitution’s supremacy clause, children under the age of 15 are classed as “protected persons,” and even if captured while fighting against US forces are to be considered victims, not POWs. In 2002, the Bush administration signed an updated version of that treaty, raising the “protected person” age to all those “under 18.”

But capturing and imprisoning children isn’t even the worst of this president’s war crimes when it comes to the abuse of the young. Under Bush’s leadership as commander in chief, the US military in Iraq and Afghanistan has been considering any male child in Iraq of age 14 or older to be a potential combatant. They have been treated accordingly — shot by US troops, imprisoned as “enemy combatants,” and subjected to torture. 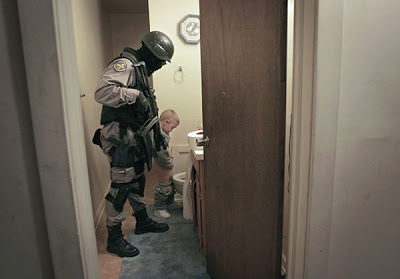 In the 2004 assault by US Marines on the city of Fallujah, things were even worse. Dexter Filkins, a reporter for the New York Times, reported that before that invasion, some 20,000 Marines encircled the doomed city, which the White House had decided to level because it harbored a bunch of insurgents and had angered the American public by capturing, killing and mutilating the bodies of four mercenaries working for US forces. The residents of the 300,000-population city were warned of the coming all-out attack. Women and children and old people were allowed to flee the city and pass through the cordon of troops. But Filkins reported that males determined to be “of combat age,” which in this case was established as 12 and up, were barred from leaving, and sent back into the city to await their fate. Young boys were ripped from their screaming mothers and sent trudging back to the city to face death.

In the ensuing slaughter, as the US dumped bombs, napalm, phosphorus, anti-personnel fragmentation weapons and an unimaginable quantity of machine gun and small arms fire on the city, it is clear that many of those young boys died.

This was a triple war crime. First of all, it was a case of collective punishment — a practice popular with the Nazis in World War II, and barred by the Geneva Conventions. The international laws of war also guarantees the right of surrender, so those men and boys who tried to leave, even if suspected of being enemy fighters, should have been allowed to surrender and be held as captives until their loyalties could be established. The boys, meanwhile, were “protected persons” who were by law to be treated as victims of war, and protected from harm.

Instead they were treated as the enemy, to be destroyed.

For these crimes, the president should today be impeached by the Congress and then tried as a war criminal.

After watching this Congress cower from its responsibility to defend the Constitution, I have little hope of that happening. But I do harbor the hope that once Bush has left office, some prosecutor in another country — perhaps Spain, or Canada or Germany — will use the doctrine of universal jurisdiction to indict him for war crimes, and, should he leave the country for some lucrative speaking engagement, arrest him, the way former dictator Augusto Pinochet was arrested by a Spanish prosecutor on a visit to the UK.

For his abuse, imprisonment and killing of children, this president should stand trial for war crimes.

Dave Lindorff’s most recent book is “The Case for Impeachment” (St. Martin’s Press, 2006). His work is available at http://www.thiscantbehappening.net/.

This entry was posted in RagBlog and tagged U.S. Aggression, War Crimes. Bookmark the permalink.