Amira Baraka : Avoid a Split on the Left 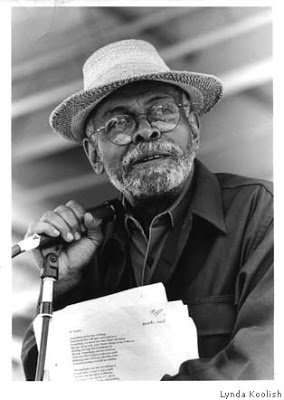 Amiri Baraka, formerly LeRoi Jones, was born in 1934 in Newark, New Jersey. He is the author of over 40 books of essays, poems, drama, and music history and criticism, a poet icon and revolutionary political activist who has recited poetry and lectured on cultural and political issues extensively in the USA, the Caribbean, Africa, and Europe. This article was originally posted on July 16, 2008 on SeeingBlack.com.

The post World War I journey of Germany from an empire, which was overthrown, and then a democratic republic, and finally the overthrow of that republic and the emergence and domination of Hitler’s Nazi fascism, is important for us to understand. Because some of the facts of these years still apply to the contemporary United States.

With the withering Depression that had set in in the late 20’s in addition to Germany’s war losses, when the international stock market collapsed (U.S. Wall St.) in 1929, a worldwide Depression of staggering proportions set in. And it is this Depression and the rise and fall of governments in Germany that set the stage for the final takeover by Hitler and the fascists—and finally the beginning of World War II.

Although McCain’s adviser Gramm says this is a “mental recession,” unless he’s referring to himself and McCain, today’s depression in the U.S. is not just mental. We should also factor in the outright theft of the last two elections, the general public bankruptcy of the Republican party, which has been playing and still is playing a “White card”. (The Democrats have not won the majority of White male voters since John Kennedy!)

There is the spreading foreclosure menace of the subprime (fraud ridden) mortgages, now at 6,000 foreclosures a day, the closing of the huge banking mortgage regime, Bear-Stearns. The Bush cabal has agreed to revalue Bear Stearns stocks so that the historically infamous speculator JPMorgan can get a better payday. No aid for the people losing their homes at terrifying rates. Today the government announced it had a new plan to save more banks. If there’s no recession why the plan to save “unthreatened” banks?

Suffice it to say there is a deepening Depression in the U.S., with the nation going from a surplus at the end of the Clinton regime to today’s deficit, much of it caused by the $10-billion-a-month war in Iraq. Even many straight-up backward Americans are convinced of the bold corruption that is the real cause of the war and spiraling gas prices since it is the oil swindlers who hold state power in the U.S. While they talk bad about the “Arabs,” the Bush group is clearly in bed with the Saudis, Arab Emirates, with Dubai now becoming a financial capital to compete with Wall St. and London.

There is no doubt that U.S. forces are losing in the Middle East, just as they got wasted in Viet Nam. The whole ugly scam of removing oil billions from Iraq ( all those contracts for privatization of Iraqi oil went to the big U.S. oilies) based on the 911 episode, the reality of which is still covered with crude lies. But now at scam’s end, with a raging Depression setting in and a war-incurred deficit climbing into the trillions, the stage is set for stunning rightward surge that will perhaps bring street fighting to the U.S. and a final toppling that will make the current shrinking of the dollar, .60 per Euro, seem mild. China already holds U.S. paper, the U.S. is China’s top debtor. IndyMac Bank has just failed in California.

So this is a time much like that in Germany, during the last phase of the Weimar Democratic Republic. Ostensibly a democratic republic, the Depression caused widespread unemployment and great public unrest. And as the curtain began to rise for fascist takeover, (See Brecht’s Berlin) the country, especially the large cities like Berlin, were inundated with pornography, sex crimes, business and political scandals and street fighting, usually between the rising fascists and the communists.

What brought the democratic era to an end was a split between the communists and the social democrats, i.e., the left and the near left and the liberals, which permitted Hitler’s National Socialists in a coalition with the conservatives and nationalists to win the election, even though the left-center coalition had more voters objectively. It was the split which allowed the right to consolidate power.

Recently in the U.S. presidential campaign we have seen two tendencies, the one to vilify and distort Obama from the right, e.g., the recent New Yorker cover described as “satirical” with Obama as a Muslim, his wife as a machine toting militant with an American flag in the fireplace and Osama bin laden in a portrait of honor on the wall. It is objectively a message from McCain, the U.S. Right and the Israelis.

But as well there is the tendency on the presumed left and the social democrats and people styling themselves “progressives” to attack Obama for moving to the right, thereby disappointing some very vocal would-be Obama voters. One woman publicized prominently in the NY Times said now she “hated him.” But as I have said repeatedly this is an imperialist country, with two imperialist parties and a media controlled directly by the 6/10ths of 1 percent of the people that own the land wealth factories, the means of production.

There is no way Obama is even in the presidential race condemning Israel or embracing Cuba. Not to know this is not to know where you are or where you have been for the last 40 years. But even with this clear motion to the center for the purposes of the general election, McCain is still a more backward and a more dangerous candidate and exactly the kind of right leaning militarist that would fit the paradigm for the weak chancellors during Weimar’s last throes that President Hindenburg removed and then appointed Hitler.

It is this split between the left and near left that is being exploited by the right with war and Depression threatening to dump this whole nation on its head, so that Obama will be defeated, McCain elected and with the McCain opening plummet the country headlong into the far, far right. Bush 2 has already obviously set the stage for this. Those elections were stolen out of desperation. The fact that Gore and Kerry were such weak liberals, tied clearly and obviously to the ruling class of this imperialist state allowed that theft to take place with minimum real struggle.

So that is the real struggle unfolding before us. First, to oppose the empty idealism which allows the elitist base to claim to represent the masses but actually have as little to do with them as possible. Allowing seemingly intelligent people to throw their votes away on McKinney or even the racial chauvinist, Nader, thus formalizing a hole in an actual progressive constituency, which allowed Bush 2 to seize power in 2000.

We must also oppose the absolutising of Obama’s progressive stance and,with that, drawing away from him as he gets closer to the general election and tacks toward the middle. This would be the other aspect of the tragic Weimar breakup of the fragile democratic coalition that caused millions to die in fascist purges, concentration camps, or World War 2.

On the other hand, it should be part of our campaign tasks to create a document of planks of progressive character to submit to Obama and publish and popularize this as well, to exert what pressure we can bring to bear on the campaign and publicly for a reversal of Bush’s neo-fascist creations, war, Depression, unemployment, violation of democratic rights, diplomatic isolation from the rest of the world, a general weakening, morally and politically and economically, of the country.

This entry was posted in RagBlog and tagged Depression, Fascism, Nazi Germany, Obama, Presidential Campaign, The Left. Bookmark the permalink.