Among the Topics That Cannot Be Discussed 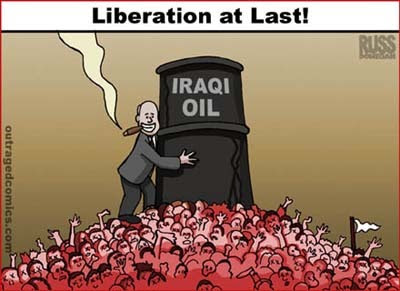 The deal just taking shape between Iraq’s Oil Ministry and four Western oil companies raises critical questions about the nature of the US invasion and occupation of Iraq — questions that should certainly be addressed by presidential candidates and seriously discussed in the United States, and of course in occupied Iraq, where it appears that the population has little if any role in determining the future of their country.

Negotiations are under way for Exxon Mobil, Shell, Total and BP — the original partners decades ago in the Iraq Petroleum Company, now joined by Chevron and other smaller oil companies — to renew the oil concession they lost to nationalisation during the years when the oil producers took over their own resources. The no-bid contracts, apparently written by the oil corporations with the help of U.S. officials, prevailed over offers from more than 40 other companies, including companies in China, India and Russia.

“There was suspicion among many in the Arab world and among parts of the American public that the United States had gone to war in Iraq precisely to secure the oil wealth these contracts seek to extract,” Andrew E. Kramer wrote in The New York Times.

Kramer’s reference to “suspicion” is an understatement. Furthermore, it is highly likely that the military occupation has taken the initiative in restoring the hated Iraq Petroleum Company, which, as Seamus Milne writes in the London Guardian, was imposed under British rule to “dine off Iraq’s wealth in a famously exploitative deal.”

Later reports speak of delays in the bidding. Much is happening in secrecy, and it would be no surprise if new scandals emerge.

The demand could hardly be more intense. Iraq contains perhaps the second largest oil reserves in the world, which are, furthermore, very cheap to extract: no permafrost or tar sands or deep sea drilling. For US planners, it is imperative that Iraq remain under U.S. control, to the extent possible, as an obedient client state that will also house major U.S. military bases, right at the heart of the world’s major energy reserves.

That these were the primary goals of the invasion was always clear enough through the haze of successive pretexts: weapons of mass destruction, Saddam’s links with Al-Qaeda, democracy promotion and the war against terrorism, which, as predicted, sharply increased as a result of the invasion.

Last November, the guiding concerns were made explicit when President Bush and Iraq’s Prime Minister Nouri Al Maliki signed a “Declaration of Principles,” ignoring the U.S. Congress and Iraqi parliament, and the populations of the two countries.

The Declaration left open the possibility of an indefinite long-term U.S. military presence in Iraq that would presumably include the huge air bases now being built around the country, and the “embassy” in Baghdad, a city within a city, unlike any embassy in the world. These are not being constructed to be abandoned.

The Declaration also had a remarkably brazen statement about exploiting the resources of Iraq. It said that the economy of Iraq, which means its oil resources, must be open to foreign investment, “especially American investments.” That comes close to a pronouncement that we invaded you so that we can control your country and have privileged access to your resources.

The seriousness of this commitment was underscored in January, when President Bush issued a “signing statement” declaring that he would reject any congressional legislation that restricted funding “to establish any military installation or base for the purpose of providing for the permanent stationing of United States Armed Forces in Iraq” or “to exercise United States control of the oil resources of Iraq.”

Extensive resort to “signing statements” to expand executive power is yet another Bush innovation, condemned by the American Bar Association as “contrary to the rule of law and our constitutional separation of powers.” To no avail.

Not surprisingly, the Declaration aroused immediate objections in Iraq, among others from Iraqi unions, which survive even under the harsh anti-labour laws that Saddam instituted and the occupation preserves.

In Washington propaganda, the spoiler to US domination in Iraq is Iran. U.S. problems in Iraq are blamed on Iran. US Secretary of State Condoleezza Rice sees a simple solution: “foreign forces” and “foreign arms” should be withdrawn from Iraq — Iran’s, not ours.

The confrontation over Iran’s nuclear programme heightens the tensions. The Bush administration’s “regime change” policy toward Iran comes with ominous threats of force (there Bush is joined by both US presidential candidates). The policy also is reported to include terrorism within Iran — again legitimate, for the world rulers. A majority of the American people favours diplomacy and oppose the use of force. But public opinion is largely irrelevant to policy formation, not just in this case.

An irony is that Iraq is turning into a US-Iranian condominium. The Maliki government is the sector of Iraqi society most supported by Iran. The so-called Iraqi army — just another militia — is largely based on the Badr brigade, which was trained in Iran, and fought on the Iranian side during the Iran-Iraq war.

Nir Rosen, one of the most astute and knowledgeable correspondents in the region, observes that the main target of the US-Maliki military operations, Moktada Al Sadr, is disliked by Iran as well: He’s independent and has popular support, therefore dangerous.

Iran “clearly supported Prime Minister Maliki and the Iraqi government against what they described as ‘illegal armed groups’ (of Moktada’s Mahdi army) in the recent conflict in Basra,” Rosen writes, “which is not surprising given that their main proxy in Iraq, the Supreme Iraqi Islamic Council dominates the Iraqi state and is Maliki’s main backer.”

“There is no proxy war in Iraq,” Rosen concludes, “because the U.S. and Iran share the same proxy.”

Teheran is presumably pleased to see the United States institute and sustain a government in Iraq that’s receptive to their influence. For the Iraqi people, however, that government continues to be a disaster, very likely with worse to come.

In Foreign Affairs, Steven Simon points out that current US counterinsurgency strategy is “stoking the three forces that have traditionally threatened the stability of Middle Eastern states: tribalism, warlordism and sectarianism.” The outcome might be “a strong, centralised state ruled by a military junta that would resemble” Saddam’s regime.

If Washington achieves its goals, then its actions are justified. Reactions are quite different when Vladimir Putin succeeds in pacifying Chechnya, to an extent well beyond what Gen. David Petraeus has achieved in Iraq. But that is THEM, and this is US. Criteria are therefore entirely different.

In the US, the Democrats are silenced now because of the supposed success of the US military surge in Iraq. Their silence reflects the fact that there are no principled criticisms of the war. In this way of regarding the world, if you’re achieving your goals, the war and occupation are justified. The sweetheart oil deals come with the territory.

In fact, the whole invasion is a war crime — indeed the supreme international crime, differing from other war crimes in that it encompasses all the evil that follows, in the terms of the Nuremberg judgment. This is among the topics that can’t be discussed, in the presidential campaign or elsewhere. Why are we in Iraq? What do we owe Iraqis for destroying their country? The majority of the American people favour US withdrawal from Iraq. Do their voices matter?

Noam Chomsky’s writings on linguistics and politics have just been collected in “The Essential Noam Chomsky,” edited by Anthony Arnove, from the New Press. Chomsky is emeritus professor of linguistics and philosophy at the Massachusetts Institute of Technology in Cambridge, Mass.

This entry was posted in RagBlog and tagged Iraq, Iraq Occupation, Oil Companies. Bookmark the permalink.