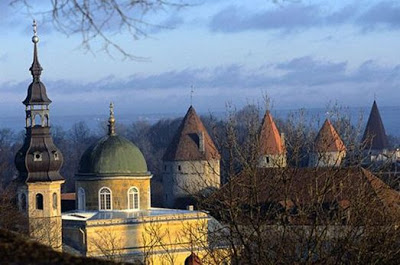 From Estonia:’Obama will open doors.’
In former Soviet republic, everyone has an opinion about Obama
by Amy Goodman / July 30, 2008

TALLINN, Estonia – When I arrived in Estonia last week — a former Soviet republic that lies just south of Finland — everyone had an opinion on Barack Obama’s speech in Berlin. The headline of the British Daily Telegraph we picked up in Finland blared “New Walls Must Not Divide Us,” with half-page photos of the American presidential candidate silhouetted against a sea of 200,000 people.

One of the first people I met in Tallinn, the capital of Estonia, was Abdul Turay, the editor in chief of The Baltic Times, an English-language weekly that covers Estonia, Latvia and Lithuania, the three Baltic nations. Granted, he’s not a typical resident for this country of largely fair-haired, light-skinned people: Turay is a black Briton whose parents come from the West African nations of Liberia and Sierra Leone. And he is Muslim. While Estonia has no mosques, he notes with pride that the Quran has just been translated into Estonian, and to the publisher’s surprise, it’s been an instant best-seller here.

I asked Turay what Obama’s candidacy means to him. “It’ll open doors for me personally if he becomes president,” he said. “It’s a momentous thing to have a black president, given America’s history. Some people say it’s not a big deal, but it is a very big deal. The U.S. is a model for the world. If people see a black man can be president of the U.S., maybe they will see me differently. If he’s special, I’m special.”

As for Obama’s politics, Turay says he doesn’t actually think Obama’s foreign policy will be that different from fellow presidential candidate John McCain’s. He said he was surprised after reading Obama’s first book, “Dreams From My Father”: “He’s almost talking about black nationalism. He’s very liberal. He’s very much a black politician, whereas today he’s a politician who happens to be black.” I asked him to explain. “I think that’s a question for Barack Obama, not me,” he said.

Turay marvels at the importance of the U.S. elections here: “There’s more interest in the American election than in the Lithuanian election, which is right next door. It’s a global election.”

Estonia may be a world away from the United States, but it is intimately tied to U.S. foreign policy. When the U.S. went looking for other countries to join the coalition to attack Iraq and Afghanistan, to give the occupations international legitimacy, Estonia was a charter member—along with numerous other former Soviet bloc countries of Eastern Europe. President Bush went to Estonia in 2006 to thank them. In 2004, none other than Sens. McCain and Hillary Clinton visited the Baltic nation together as part of a congressional delegation. The story goes that Clinton challenged McCain to a vodka-drinking contest, an Estonian tradition. McCain accepted. When a Clinton aide was asked about it, he replied, “What happens in Estonia, stays in Estonia.”

Many feel the Baltic nations’ participation in the occupations was quid pro quo for their membership in NATO. Estonia has paid a price, as its soldiers have lost their lives in both Iraq and Afghanistan—the latter a place where Estonian soldiers have died before, as conscripts of the Soviet army when it invaded Afghanistan in 1979.

A decade later, Estonia was the scene of a nonviolent revolution. Singing has long been a national pastime, and song festivals, in which thousands come together to sing, are a tradition. In April 1988, this gathering turned into a vehicle for mass mobilization. In the Estonian capital, with the country’s banned blue, black and white flag unfurled on the back of a motorbike, hundreds of thousands began singing the forbidden national anthem. The movement gained momentum throughout the three Baltic nations. In August 1989, 2 million people joined hands in a Baltic chain spanning hundreds of miles, from Tallinn to Riga to Vilnius, the capitals of Estonia, Latvia and Lithuania, respectively. Estonia and its Baltic neighbors won their independence in 1991, as the Soviet Union collapsed.

Now, Turay observes, “Estonia looks to America.” With Berlin’s wall now gone, Turay hopes other walls will soon fall, too. “If the president of America is a black person, other countries will realize that we have people who look like the president who are doing something important. … I think it will happen everywhere.”

This entry was posted in RagBlog and tagged Estonia, Islam, Obama, Presidential Campaign, The World, World Opinion. Bookmark the permalink.