An American Icon, the SUV, Is Slowly Vanishing 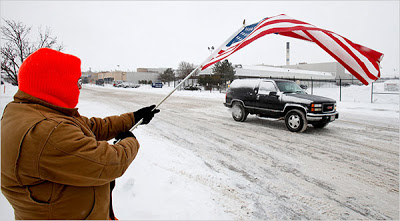 Billy Bob Grahn, a county official, paid tribute Tuesday as a G.M. plant in Janesville, Wis., became one of three to close. Photo: Andy Manis for The New York Times.
Nearly the End of the Line for S.U.V.’s
By Nick Bunkley and Bill Vlasic / December 23, 2008

JANESVILLE, Wis. — Even a federal bailout could not save three of the last remaining plants in the United States still making sport utility vehicles.

Reeling from its financial problems and a collapsing S.U.V. market, General Motors on Tuesday closed its factories in this city and in Moraine, Ohio, marking the passing of an era when big S.U.V.’s ruled the road. The moves followed the shutdown last Friday of Chrysler’s factory in Newark, Del., which produced full-size S.U.V.’s.

The last Chevrolet Tahoe rolled off the line here in Janesville shortly after 7 a.m. in the 90-year-old plant, which had built more than 3.7 million big S.U.V.’s since the early 1990s.

Most of the plant’s 1,100 remaining workers were not scheduled to work the final day, but many showed up for an emotional closing ceremony. Dan Doubleday, who had 22 years on the job, broke down in the plant’s snowy parking lot afterward.

“I was a fork lift driver,” he said, glancing at his watch through welling tears. “Until about seven minutes ago.”

At the Mocha Moment coffee shop around the corner, two co-workers, Michael Berberich and Lisa Gonzalez, exchanged Christmas presents just as they had most years since they were both hired in 1986.

“For a while we had it made,” Ms. Gonzalez said. “I just wish it would have lasted.”

The fate of the Janesville, Moraine, and Newark plants was sealed this spring, when rising gas prices suddenly made S.U.V.’s unpopular, and long before President Bush approved $17.4 billion in emergency loans last week to keep G.M. and Chrysler out of bankruptcy.

While the overall new vehicle market has dropped 16 percent so far this year, sales of big S.U.V.’s have plummeted 40 percent.

With consumers shifting rapidly to smaller, more fuel-efficient cars, G.M. no longer needed to produce big S.U.V.’s in Janesville as well as in a plant in Texas.

Still, some Janesville workers felt G.M. broke a pledge in its 2007 contract with the United Automobile Workers to keep the factory running.

“We didn’t deserve this,” said John Dohner Jr., shop chairman at U.A.W. Local 95. “We’ve all put a lot of hard work into trying to secure a future here.”

Shrinking market shares have forced G.M., Chrysler and the Ford Motor Company to close more than a dozen assembly plants and shed tens of thousands of workers in recent years. The moves have devastated communities from Georgia to New Jersey and from Michigan to Oklahoma.

Even so, G.M. and Chrysler are likely to close more manufacturing facilities as they overhaul their operations to meet conditions of the federal loans.

“The companies are moving very fast now to close plants, but it may be too little, too late,” said John Casesa, a principal in the Casesa Shapiro Group, a consulting firm. “They’re doing now what they should have done 15 or 20 years ago.”

G.M.’s Moraine plant was the last to build the midsize Chevrolet Blazers and GMC Envoys that were once among the best-selling vehicles in the country.

The Janesville factory built three of the biggest and most profitable vehicles in G.M.’s lineup, the Chevrolet Tahoe and Suburban and GMC Yukon. The Chrysler plant in Newark also made big S.U.V.’s — the Dodge Durango and Chrysler Aspen.

Their closings leave the Big Three with only one factory each still devoted to making traditional big S.U.V.’s — Ford in Kentucky, G.M. in Texas, and Chrysler in Detroit.

The Janesville plant once employed more than 5,000 workers and turned out 20,000 Tahoes, Yukons and Suburbans each month. With its closing, residents worried about the future of this city of 64,000 people, about 75 miles southwest of Milwaukee.

“Janesville will lose a lot,” said Patti Homan, as she finished a strawberry-topped waffle at the nearby Eagle Inn restaurant. “I expect my electricity to go up, water rates to go up, property taxes to go up, and the value of my home to go down.”

Ms. Homan worked in the plant for 23 years, and her father, brother and husband all retired from the factory. “It’s generation after generation for so many families here,” she said.

The empty feelings in Janesville were echoed in Moraine, a suburb of Dayton and last week at the Chrysler plant in Newark.

More than 1,000 workers were laid off at the Moraine plant. Under terms of the U.A.W. contract for all its members, they and the workers in Janesville and Newark will collect unemployment checks and payments from G.M. that together equal about 80 percent of their take-home pay. 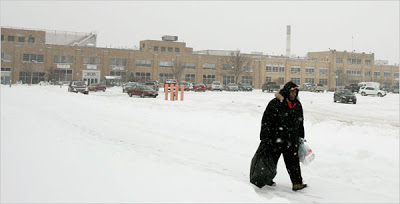 But those payments will only last about a year. And with the U.A.W. prepared to suspend its “jobs bank” program as a condition of the federal loans, there will be no safety net after that.

Some workers will have an opportunity to transfer to other plants. But with the industry contracting so quickly, there is little job security in making a move.

“I can’t risk transferring,” said David Williams, one of the remaining 1,100 workers at the Newark plant when it closed. “I don’t want to go 1,200 miles away to get laid off again.”

Mr. Williams installed a sunroof on the last Dodge Durango to come down the assembly line in Newark. Now he plans to take massage-therapy classes and pursue a new career far from the factory floor.

“Enough with the concrete,” he said. “It’s time for some carpet and climate control.”

On the last day for the Newark plant, 84-year-old Woody Bevans unlocked the weight room at the U.A.W. union hall and began brewing coffee for a handful of retirees who passed the time there.

A Texan who started work at the plant when it opened in 1952, Mr. Bevans recalled how the factory was first used to build tanks for the Korean War. He retired in 1983, but thought the plant would go on forever.

“We had hope right up until the last,” Mr. Bevans said. “We’re really going to feel it when it shuts down. There’s a big chain reaction, believe me.”

The University of Delaware is negotiating with Chrysler to buy the plant and redevelop the 270-acre site with academic buildings and a technology park.

After the plant closed, one of the workers, Merle Black, drove directly to a Delaware Department of Labor office and registered for job openings. He is hoping to become a heavy equipment operator, and possibly be involved in the demolition of the factory where he used to install airbag parts.

The closing of an auto plant draws a crowd, with some people somber and nostalgic and others defiant and energized.

Outside the Janesville plant on Tuesday, a few workers posed for pictures in front of the building while others said their goodbyes as they loaded gear in their snow-covered S.U.V.’s

One man had two small children with him on the last day. Another man wearing an orange ski mask waved a large American flag as departing workers drove by.

Many of the workers trudged over to a one-story, cinder-block building on the grounds of the factory, a bar called the Zoxx 411 Club. A sign said “customers only” and forbade reporters and media from entering.

Outside, a cluster of reporters, including a documentary film crew from Japan, tried to interview workers about the last days of the S.U.V. plant.

“It’s been a good ride, man,” said Frank Hereford, a body shop worker, as he left the plant with a microwave oven that heated up countless lunches during many of his 38 years with G.M. “Good people worked down here.”