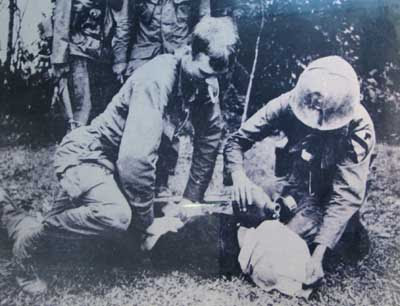 That U.S. military personnel — and their superiors — supported the torture of enemy combatants elicits disturbingly little outrage among most voters. Human beings seldom torture those they regard as like themselves. Humans need and crave community, but throughout history narrow definitions of community and exaggerated claims on its behalf have occasioned grave injustices.

The most widely accepted defense of torture is a limited one: a nation possesses a sovereign right to torture a terrorist who purportedly knows the whereabouts of a ticking time bomb. If authorities had solid reason to know that an individual possessed such knowledge, it would present a serious moral dilemma.

Torture, however, has been employed well beyond those extreme parameters. Jane Mayer argues in her new book “The Dark Side” that after 9-11 the government emphasized “interrogation over due process to pre-empt future attacks” even before any ticking bombs were even being made.

In Portland Phoenix articles, Lance Tapley points out that about 35,000 U.S. citizens are held in solitary confinement at “Supermaxes” (including Maine’s). Many are subjected to torture in the form of beating, sleep deprivation and mental abuse that rival practices at Guantanamo, according to Tapley.

Torture’s political invisibility is remarkable given its counterproductive consequences. Tapley points out that the torture of Supermax prisoners, most of whom are mentally ill, leads to high rates of recidivism and poses great public risk.

Frank Rich, commenting on Mayer, suggests: “torture may well be enabling future attacks… false confessions and [an] avalanche of misinformation since 9-11… compromised prosecutions, allowed other culprits to escape and sent the American military on wild-goose chases.”

Some Americans do oppose torture, but even many who are opposed won’t acknowledge that “we” torture individuals not privy to secret bomb information. For example, prison authorities, major media and political leaders have not challenged Tapley’s specific factual assertions. Nonetheless, none have acted on his findings. Many national leaders even engage in tortuous redefinitions of torture.

These responses may have deep origins. Our world now presents shrinking employment options, rapid changes in neighborhoods and complex interdependence. Social turmoil leads many Americans, steeped in traditional notions of the U.S. as “a city upon a hill” in possession of unique truth, to embrace a problematic conviction: individuals whose differences in religion, lifestyle or ethnicity pose no direct threat really are dangerous.

The world is seen as irrevocably divided between a virtuous “us” and a dangerous “them.” We would never torture or would do so only for overwhelming reasons. When victims of our torture attack or murder us, their actions merely confirm our conviction that they are “basically evil.”

Greater equality and adequate security might blunt xenophobic responses to economic crisis. Nonetheless, especially in a world becoming ever more multicultural, achieving progressive reforms is unlikely without also challenging some prevalent forms of fundamentalism. These dogmatic and exclusionary creeds blind us to the limits of our own intelligence, deny opportunities for full self-development, and preclude social justice movements across racial and religious lines.

For the sake of others and ourselves, we need dialogues to explore sympathetically the deeper — and inherently contestable — assertions about God, truth and morality that underlie major religious, national and ethnic communities. Nations also must acknowledge that they can no longer manage all that goes on even within their own borders. “Multinational” corporations constrain national governments.

Nations should acknowledge the contributions that transnational labor and environmental activists can make by adding labor and environmental standards to the corporate protections in trade agreements. Our willingness to articulate, collectively revise and live by international civil liberties standards would also lead more of the world’s people to disclose terrorist criminal conspiracies.

What if, as James Der Derian, director of the Global Security Program at Brown University, has argued, ” border guards, concrete barriers and earthen levees not only prove inadequate but act as force multipliers, producing automated bungling that transform isolated events and singular attacks into global disasters.” We must, he argues, “ask if such mega-catastrophes are no longer an exception but part of densely networked systems that defy national management.”

Our support of torture and our desperate efforts to deny its prevalence — like defenses of slavery — bespeak an arrogant disregard of humans who may be different but are no less worthy. They also emanate from and intensify a false sense of security that poses increased risks to us all.

[John Buell is a political economist who lives in Southwest Harbor. Readers may contact him at jbuell@acadia.net. ]

This entry was posted in RagBlog and tagged American Society, Torture. Bookmark the permalink.