Analysing the Battle for Haifa Street 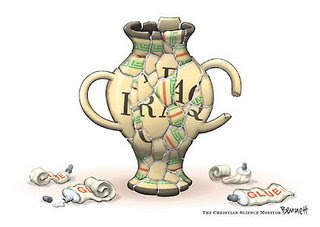 In his Iraq policy address on January 10, President Bush promised three new initiatives: a “surge” of American troops accompanied by a new “clear, hold, and build” strategy in Sunni insurgent strongholds; an offensive against Shia militias, particularly the Sadrist Mahdi Army which “U.S. military officials now identify as the greatest security threat in Iraq”; and forceful action to prevent Iran from further increasing its influence in Iraq and the Middle East.

Events in the last few weeks make it clear that all three prongs of this strategy are being enacted, even while the Congress is engaged in a prolonged debate over its (non-binding) opposition to the “surge” part of the new regional plan. The “surge” strategy was actually initiated one day before the speech was even given — in an offensive on Baghdad’s Haifa Street that briefly dominated the headlines. The new initiative aimed at Shia militias appears to have begun with a battle outside of Najaf in which about 200 members of the Al-Hawatim and al-Khazali tribes were killed by American and Iraqi forces — apparently because the tribal militias had been involved in a growing (if under-reported) “anti-U.S. and anti-Baghdad” guerrilla war that “has been spreading like wildfire” in the Shia south. And the new aggressiveness towards Iran is now being played out not only in Iraq, but in the increasingly credible threats of an American or Israeli, or combined American and Israeli, air assault on Iran itself.

We may have to wait weeks, or even months, to evaluate the consequences of American actions against those Shia militias and Iran. But the Haifa Street offensive, now almost a month old, already offers us a vivid portrait of the horrific consequences that are the likely result of the Sunni insurgent part of the President’s “surge” strategy.

Haifa Street as an Enemy Stronghold

Haifa Street, a moderately prosperous two-mile-long avenue just outside the American-controlled Green Zone in Baghdad, has been a center of Sunni resistance since early in the war. Despite the imagery of constant violence associated with the neighborhood in the media, it has, like most insurgent areas, largely been quiet — except when American troops attempted to pacify it.

Soon after the fall of Baghdad, anti-American forces became the military and political leadership in the Haifa Street neighborhood, setting up local militias to combat a wave of criminal violence that swept through the capital after the Americans dismantled the Iraqi military and police. By 2004, the insurgents were the local government in the area, institutionalizing their form of Sunni fundamentalism but at that early date still tolerating the presence of a Shia minority, who continued to live peacefully among the Sunni majority.

Sustained violence only occurred when American patrols entered the area. Then snipers, IEDs, and gun battles would — often successfully — be brought into play to divert the Americans from their goal of arresting or killing suspected insurgents. The ferocity of the resistance led American soldiers to dub the area “Death Street.” After one abortive attempt at conquering the neighborhood, the number of U.S. patrols dwindled as Haifa Street became one of many virtual “no-go” areas in the capital (not to speak of the country), “off-limits for American and even Iraqi soldiers.”

In November 2004, an IED exploded near one of those occasional American patrols, demolishing a Humvee and triggering a cascading set of events that culminated in an American helicopter shooting into a crowd and killing Mazen Tomeizi, a Palestinian reporter for the al Arabiya satellite news network of Dubai. Because Tomeizi was filming his follow-up to the earlier incident when he was shot, his death became one of the most horrific, widely viewed images of the war — at least in the Middle East — with his blood splattering on the camera as he cried, “I’m going to die, I’m going to die.” This incident, apparently, convinced the American military command to make another attempt to pacify Haifa Street.

Under the headline, “A Violent Street Finds Calm,” Christian Science Monitor reporter Scott Peterson described how the Americans took control of the neighborhood in a six-month military offensive, involving “rooftop snipers” and other “tough measures that reportedly included abuse of detainees.” This running battle, which began in January 2005, qualifies as the most violent period in recent Haifa Street history — until the latest offensive. But in American reportage, the emphasis was on the pacification and quiescence achieved, once — by the late spring of 2005 — the Americans had suppressed the active resistance.

Sprinkled in with the positive stories of grateful residents welcoming the end of the fighting were telltale signs of an unpopular military occupation: Some residents would “glower” when American troops passed by; “tensions [were] a little higher” whenever American troops entered a street; and graffiti proclaiming, “Long Live the Mujahideen,” were quickly restored after American soldiers tried to obliterate them. Nevertheless, in June of 2005, ABC reporter Nick Watt declared that “Death Street is indeed a thing of the past.”

That battle, now two years past, was a perfect example of how the new “clear, hold, and build” strategy that President Bush announced in his recent speech is supposed to work. An American clearing-and-holding operation was to be followed by a transfer of power to Iraqi military units, supposedly already “stood up” through intensive American training and advising. This particular turn-over operation was hailed at the time by occupation authorities as “a high-profile example of how Iraqi National Guard troops — trained, supported, and let loose by US advisers — can claw back territory from insurgents.” It was heralded as a giant step forward, “a template for spreading government control across Iraq and undercutting the insurgency.”

The template, however, ultimately collapsed because the Haifa Street guerrillas did what guerillas normally do: They melted into the population and awaited new opportunities to attack the occupation. Just before the declarations of success were issued, they initiated their own “surge of violence” before again melting into the neighborhood. And even at the moment when ABC reporter Watt was offering an obituary to “Death Street,” American troops and their Iraqi protégés were conducting dozens of weekly patrols, breaking into homes in the Haifa Street neighborhood to arrest or kill suspected insurgents. These patrols, together with a massive increase in unemployment, the precipitous deterioration of public services, and economic shocks generated by the removal of government food and fuel subsidies only led to increased support for, as well as membership in, the resistance.

Read the rest of this detailed and insightful analysis here.