And in this Corner : The Globalists Vs. the Pragmatists 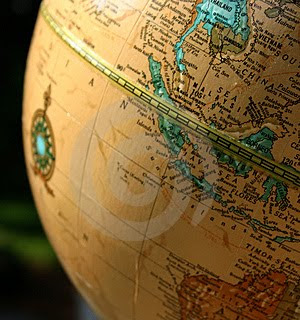 ‘Globalist discourse’ on war and peace:
2010 will be year of ideological struggle

The year ends with the resurgence of what we might call “globalist discourse.” Globalist discourse is a set of ideas or theories about how the world works that justifies United States military and political intervention on a global scale.

Since the United States became a great power, it has sought to expand its influence, power, and economic presence everywhere. But during some periods the policy and the defenses of it (the discourse) have emphasized diplomacy, building relationships with allies, and even, from time to time, currying the favor of potential competitors for world domination.

This represents a kind of “pragmatic approach” to global influence. During other periods the United States has rejected diplomacy, demanded allied obedience, and engaged in bloody military adventures, the globalist approach.

The election of Barack Obama offered the hope to the peace movement, and large sectors of the public that the new administration would reinstate a more “pragmatic” approach to foreign policy. As has been stated by many, however, Obama’s newly announced counterinsurgency policy for Afghanistan and bold proclamation at the Nobel Peace prize awards ceremony that the world is an ugly place and therefore that wars are inevitable suggest that he may be tilting toward the more globalist, interventionist strain in United States policy.

Pressure to continue to move in the globalist direction increased as 2009 came to a close. First, spokespersons for war criticized the Obama administration for not understanding that the United States is in a perpetual global war against terrorists. Former Vice President Dick Cheney spoke for this view after the Christmas Day attempted terrorist attack on a commercial plane flight ending in Detroit. “We are at war and when President Obama pretends we aren’t, it makes us less safe.”

Cheney decried Obama’s reluctance to use the language of “war on terrorism.” Such language Cheney said “doesn’t fit with the view of the world he (Obama) brought with him to the Oval Office.” And, of course, what the Bush/Cheney team brought to the Oval Office, the former Vice President argued, was much preferred. It was the view that the United States, as the last remaining superpower, is constantly threatened by forces more diabolical than the former Soviet Union. 9/11 was just one manifestation of a global war of “Jihadists” who wish to destroy the U.S.

Unfortunately, rather than directly challenging the validity of this view, spokespersons from the Democratic Party, responded by saying that Obama in fact has said that the U.S. is at war. They reminded the public that in his inaugural address Obama proclaimed that; “Our nation is at war against a far-reaching network of violence and hatred.” However, to provide some rationality to the response an adviser to the President for Homeland Security, John O. Brennan, indicated that U.S. policy is targeted at specific threats which are “…tangible-Al Qaeda, violent extremists, and terrorists- rather than at war with a tactic, terrorism.”

An additional byproduct of what may be called “the doctrine of perpetual violence” is the claim that military priorities trump all other policies. In this regard Cheney pointed out that the Obama perspective on the world does not fit the needs of national security because “…it doesn’t fit with what seems to be the goal of his presidency — social transformation — the restructuring of American society.” Cheney implied that Obama is squandering energy, resources, and time on health care reform, global warming, jobs, education, and other vital needs at home rather than engaging what is needed to defeat “the terrorists.”

A parallel set of claims about threats to the United States was aired in a troubling December 31 broadcast segment on National Public Radio. In it, NPR foreign policy analyst Tom Gjelten, interviewed so-called experts who claimed that failure to stop the Taliban in Afghanistan and Pakistan might lead to wider wars in Kazakhstan, Turkmenistan, Kyrgyzstan, Uzbekistan, and Tajikistan. These threats to regional stability were also threats to United States vital economic, political, and military interests.

Gjelten sited Jean-Louis Bruguiere who was identified as a European Union envoy on terrorism. Bruguiere suggested that an “arc of conflict” was emerging that increasingly encompassed Afghanistan, Pakistan, and the former Soviet Republics of Central Asia. He added that radical insurgent groups, which formerly operated only in their own countries now work in collaboration with their counterparts in other countries. If the insurgents win in Afghanistan, it will boost the prospects of radical insurgent victories in the other threatened regimes.

Paul Quinn-Judge, identified as the Central Asia Director for the International Crisis Group, referred to the importance of one insurgent group, the Islamic Movement of Uzbekistan (IMU), which is now operating with the Taliban in Afghanistan. “If the Taliban can consolidate themselves in northern Afghanistan, that’s already going to be an excellent jumping-off point for the IMU and for other Central Asian Islamists” which “…would be a very disturbing development for most of the countries of Central Asia.”

Gjelten then referred to David Sedney, the Deputy Assistant Secretary of Defense for South and Central Asia, who in recent Senate hearings indicated that some supplies for the U.S. war on Afghanistan are brought via road and rail through Central Asia, the so-called Northern Distribution Network. He said that in “…the mindset of the Taliban and other Islamist movements, Central Asia is now part of the general theater of war.”

While many Americans, perhaps most, dismiss the ravings of Dick Cheney, the threat of terrorism, the reminders of the horror of 9/11, the articulation of the view of the world that says nations and peoples are driven by the violent laws of the jungle have some resonance. Even greater weight is given to the “expert” laced analyses of hand-picked “experts” put on display with intellectual reverence by National Public Radio.

As 2010 dawns, the peace movement must begin to attack the fundamental premises of the globalist discourse. Wars are not inevitable. There is no global jihad. U.S. violence in the world generates equal and more threatening responses. And, finally, the whole globalist discourse celebrates and revels in massive violence, military waste, and dehumanization. Therefore as we select our political representatives, consume news and views about the world, and work for a better world, we must demand a discourse that is not wrapped in apocalyptic visions of human affairs.