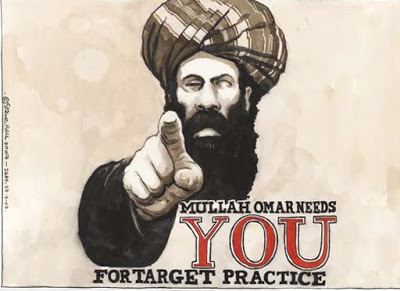 Why does the US think it can win in Afghanistan?
By Robert Fisk / September 20, 2008

The Taliban are better trained, and – sad to say – increasingly tolerated by the local civilian population

Poor old Algerians. They are being served the same old pap from their cruel government. In 1997, the Pouvoir announced a “final victory” over their vicious Islamist enemies. On at least three occasions, I reported – not, of course, without appropriate cynicism – that the Algerian authorities believed their enemies were finally beaten because the “terrorists” were so desperate that they were beheading every man, woman and child in the villages they captured in the mountains around Algiers and Oran.

And now they’re at it again. After a ferocious resurgence of car bombing by their newly merged “al-Qa’ida in the Maghreb” antagonists, the decrepit old FLN government in Algiers has announced the “terminal phase” in its battle against armed Islamists. As the Algerian journalist Hocine Belaffoufi said with consummate wit the other day, “According to this political discourse … the increase in attacks represents undeniable proof of the defeat of terrorism. The more terrorism collapsed, the more the attacks increased … so the stronger (terrorism) becomes, the fewer attacks there will be.”

We, of course, have been peddling this crackpot nonsense for years in south-west Asia. First of all, back in 2001, we won the war in Afghanistan by overthrowing the Taliban. Then we marched off to win the war in Iraq. Now – with at least one suicide bombing a day and the nation carved up into mutually antagonistic sectarian enclaves – we have won the war in Iraq and are heading back to re-win the war in Afghanistan where the Taliban, so thoroughly trounced by our chaps seven years ago, have proved their moral and political bankruptcy by recapturing half the country.

It seems an age since Donald “Stuff Happens” Rumsfeld declared,”A government has been put in place (in Afghanistan), and the Islamists are no more the law in Kabul. Of course, from time to time a hand grenade, a mortar explodes – but in New York and in San Francisco, victims also fall. As for me, I’m full of hope.” Oddly, back in the Eighties, I heard exactly the same from a Soviet general at the Bagram airbase in Afghanistan – yes, the very same Bagram airbase where the CIA lads tortured to death a few of the Afghans who escaped the earlier Russian massacres. Only “terrorist remnants” remained in the Afghan mountains, the jolly Russian general assured us. Afghan troops, along with the limited Soviet “intervention” forces, were restoring peace to democratic Afghanistan.

And now? After the “unimaginable” progress in Iraq – I am quoting the fantasist who still occupies the White House – the Americans are going to hip-hop 8,000 soldiers out of Mesopotamia and dump another 4,700 into the hellfire of Afghanistan. Too few, too late, too slow, as one of my French colleagues commented acidly. It would need at least another 10,000 troops to hope to put an end to these Taliban devils who are now equipped with more sophisticated weapons, better trained and increasingly – sad to say – tolerated by the local civilian population. For Afghanistan, read Irakistan.

Back in the late 19th century, the Taliban – yes, the British actually called their black-turbaned enemies “Talibs” – would cut the throats of captured British soldiers. Now this unhappy tradition is repeated – and we are surprised! Two of the American soldiers seized when the Taliban stormed into their mountain base on 13 July this year were executed by their captors.

And now it turns out that four of the 10 French troops killed in Afghanistan on 18 August surrendered to the Taliban, and were almost immediately executed. Their interpreter had apparently disappeared shortly before their mission began – no prizes for what this might mean – and the two French helicopters which might have helped to save the day were too busy guarding the hopeless and impotent Afghan President Hamid Karzai to intervene on behalf of their own troops. A French soldier described the Taliban with brutal frankness. “They are good soldiers but pitiless enemies.”

The Soviet general at Bagram now has his amanuensis in General David McKiernan, the senior US officer in Afghanistan, who proudly announced last month that US forces had killed “between 30 and 35 Taliban” in a raid on Azizabad near Herat. “In the light of emerging evidence pertaining (sic) to civilian casualties in the … counter-insurgency operation,” the luckless general now says, he feels it “prudent” – another big sic here – to review his original investigation. The evidence “pertaining”, of course, is that the Americans probably killed 90 people in Azizabad, most of them women and children. We – let us be frank and own up to our role in the hapless Nato alliance in Afghanistan – have now slaughtered more than 500 Afghan civilians this year alone. These include a Nato missile attack on a wedding party in July when we splattered 47 of the guests all over the village of Deh Bala.

And Obama and McCain really think they’re going to win in Afghanistan – before, I suppose, rushing their soldiers back to Iraq when the Baghdad government collapses. What the British couldn’t do in the 19th century and what the Russians couldn’t do at the end of the 20th century, we’re going to achieve at the start of the 21 century, taking our terrible war into nuclear-armed Pakistan just for good measure. Fantasy again.

Joseph Conrad, who understood the powerlessness of powerful nations, would surely have made something of this. Yes, we have lost after we won in Afghanistan and now we will lose as we try to win again. Stuff happens.

This entry was posted in RagBlog and tagged Afghanistan, Middle East, U.S. Aggression. Bookmark the permalink.