And They Turned the Lights Off When They Left 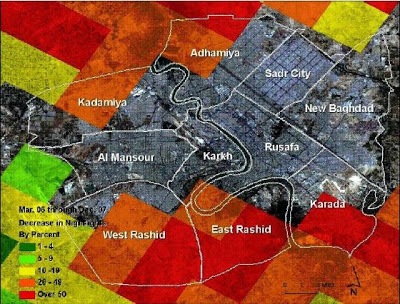 Satellite image of night lights in Baghdad. By tracking the amount of light emitted by Baghdad neighborhoods at night, a team of UCLA geographers has uncovered fresh evidence that last year’s U.S. troop surge in Iraq may not have been as effective at improving security as some U.S. officials have maintained. (Credit: Image courtesy of University of California – Los Angeles)
Study Of Satellite Imagery Casts Doubt On Surge’s Success In Baghdad
September 19, 2008

By tracking the amount of light emitted by Baghdad neighborhoods at night, a team of UCLA geographers has uncovered fresh evidence that last year’s U.S. troop surge in Iraq may not have been as effective at improving security as some U.S. officials have maintained.

Night light in neighborhoods populated primarily by embattled Sunni residents declined dramatically just before the February 2007 surge and never returned, suggesting that ethnic cleansing by rival Shiites may have been largely responsible for the decrease in violence for which the U.S. military has claimed credit, the team reports in a new study based on publicly available satellite imagery.

“Essentially, our interpretation is that violence has declined in Baghdad because of intercommunal violence that reached a climax as the surge was beginning,” said lead author John Agnew, a UCLA professor of geography and authority on ethnic conflict. “By the launch of the surge, many of the targets of conflict had either been killed or fled the country, and they turned off the lights when they left.”

The night-light signature in four other large Iraqi cities — Kirkuk, Mosul, Tikrit and Karbala — held steady or increased between the spring of 2006 and the winter of 2007, the UCLA team found. None of these cities were targets of the surge.

Baghdad’s decreases were centered in the southwestern Sunni strongholds of East and West Rashid, where the light signature dropped 57 percent and 80 percent, respectively, during the same period.

By contrast, the night-light signature in the notoriously impoverished, Shiite-dominated Sadr City remained constant, as it did in the American-dominated Green Zone. Light actually increased in Shiite-dominated New Baghdad, the researchers found.

Until just before the surge, the night-light signature of Baghdad had been steadily increasing overall, they report in “Baghdad Nights: Evaluating the U.S. Military ‘Surge’ Using Night Light Signatures.”

“If the surge had truly ‘worked,’ we would expect to see a steady increase in night-light output over time, as electrical infrastructure continued to be repaired and restored, with little discrimination across neighborhoods,” said co-author Thomas Gillespie, an associate professor of geography at UCLA. “Instead, we found that the night-light signature diminished in only in certain neighborhoods, and the pattern appears to be associated with ethno-sectarian violence and neighborhood ethnic cleansing.”

The effectiveness of the February 2007 deployment of 30,000 additional U.S. troops has been a subject of debate. In a report to Congress in September of that year, Gen. David Petraeus claimed “the military objectives of the surge are, in large measure, being met.” However, a report the same month by an independent military commission headed by retired U.S. Gen. James Jones attributed the decrease in violence to areas being overrun by either Shiites or Sunnis. The issue now figures in the U.S. presidential race, with Republican presidential candidate John McCain defending the surge and Democratic hopeful Barack Obama having been critical of it.

Reasoning that an increase in power usage would represent an objective measure of stability in the city, Agnew and Gillespie led a team of UCLA undergraduate and graduate students in political science and geography that pored over publicly available night imagery captured by a weather satellite flown by the U.S. Air Force for the Department of Defense.

Orbiting 516 miles above the Earth, Satellite F16 of the Defense Meteorological Satellite Program, Operational Linescan System (DMSP/OLS) contains infrared sensors that calculate, among other things, the amount of light given off in 1.75-square-mile areas. Using geo-referenced coordinates, the team overlaid the infrared reading on a preexisting satellite map of daytime Iraq created by NASA’s Landsat mapping program. The researchers then looked at the sectarian makeup in the 10 security districts for which the DMSP satellite took readings on four exceptionally clear nights between March 20, 2006, when the surge had not yet begun, and Dec. 16, 2007, when the surge had ended.

Lights dimmed in those neighborhoods that Gen. Jones pointed to as having experienced ethno-sectarian violence and neighborhood ethnic cleansing in his “Report of the Independent Commission on the Security Forces of Iraq.”

“The surge really seems to have been a case of closing the stable door after the horse has bolted,” Agnew said.

Long-term obstacles to meeting Baghdad’s power needs may have contributed to the decrease in night lights in the city’s southwestern parts, the researchers acknowledge. But Baghdad’s shaky power supply does not fully account for the effect, they contend, citing independent research showing that decaying and poorly maintained power plants and infrastructure were meeting less than 10 hours of Baghdad’s power needs prior to the fall of Saddam Hussein.

“This was the part of the city that had the best sources of connection and the most affluent population, so they could actually generate power themselves, and they were in the habit of doing so well before the U.S. invasion,” said Agnew, the president of the American Association of Geographers, the field’s leading professional organization. “But we saw no evidence of a widespread continuation of this practice.”

In addition to casting doubt on the efficacy of the surge in general, the study calls into question the success of a specific strategy of the surge, namely separating neighborhoods of rival sectarian groups by erecting concrete blast walls between them. The differences in light signatures had already started to appear by the time American troops began erecting the walls under Gen. Petraeus’s direction, the researchers found.

“The U.S. military was sealing off neighborhoods that were no longer really active ribbons of violence, largely because the Shiites were victorious in killing large numbers of Sunnis or driving them out of the city all together,” Agnew said. “The large portion of the refugees from Iraq who went during this period to Jordan and Syria are from these neighborhoods.”

Previous research has used satellite imagery of night-light saturation to measure changes in the distribution of populations in a given area, but the UCLA project is believed to be the first to study population losses and migration due to sectarian violence. The outgrowth of an undergraduate course in the use of remote sensing technologies in the environment, the UCLA project was inspired by a desire to bring empirical evidence to a long-running debate.

“We had no axe to grind,” said Agnew. “We were very open. If we had found that the situation was different, we would’ve reported it. Our main goal was to bring fairly objective and unobtrusive measures to a particularly contentious issue.”

[Adapted from materials provided by University of California – Los Angeles.]

This entry was posted in RagBlog and tagged Iraq Occupation, Iraq War, The Surge. Bookmark the permalink.