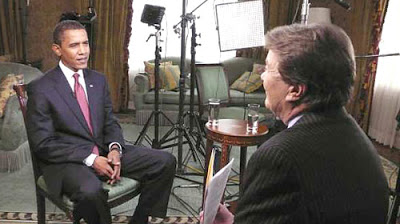 In the first two weeks since the election, President-elect Barack Obama has broken with a tradition established over the past eight years through his controversial use of complete sentences, political observers say.

But Mr. Obama’s decision to use complete sentences in his public pronouncements carries with it certain risks, since after the last eight years many Americans may find his odd speaking style jarring.

According to presidential historian Davis Logsdon of the University of Minnesota, some Americans might find it “alienating” to have a President who speaks English as if it were his first language.

“Every time Obama opens his mouth, his subjects and verbs are in agreement,” says Mr. Logsdon. “If he keeps it up, he is running the risk of sounding like an elitist.”

The historian said that if Mr. Obama insists on using complete sentences in his speeches, the public may find itself saying, “Okay, subject, predicate, subject predicate – we get it, stop showing off.”

The President-elect’s stubborn insistence on using complete sentences has already attracted a rebuke from one of his harshest critics, Gov. Sarah Palin of Alaska.

“Talking with complete sentences there and also too talking in a way that ordinary Americans like Joe the Plumber and Tito the Builder can’t really do there, I think needing to do that isn’t tapping into what Americans are needing also,” she said.

1 Response to Andy Borowitz : Change we can Actually Understand!