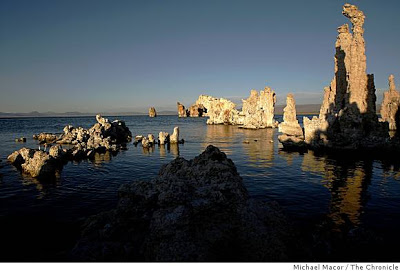 SAN FRANCISCO — From the mountains of Yosemite to the tropical lowlands of Costa Rica, global warming is forcing animals and plants to move to higher and higher elevations, searching for climates that have allowed them to evolve and thrive for millions of years.

The exodus from less tolerable habitats to cooler and more benign environments has been taking place for nearly a century, according to scientists who scrambled over rocks and ridges, through steamy rain forests and up steep volcanic slopes to complete their painstaking surveys.

And in a few cases, the moves are taking a toll: Some mountain animals, left with smaller ranges to forage for food, may face extinction, while others are up against Darwinian competition as their new habitats intrude on already-established animal populations.

“These kinds of changes have been going on forever,” said James L. Patton, a biologist at UC Berkeley’s Museum of Vertebrate Zoology. “The only difference is that this has probably happened in our lifetime. It’s the speed with which these changes are taking place that gives one pause.”

As the pace of global warming quickens, change is everywhere: from glaciers melting in Greenland, to ice shelves crumbling in Antarctica, to coral reefs dying in tropic seas – and now to animal and plant life in many parts of the world.

In a report appearing today in the journal Science, Craig Moritz, also of the Museum of Vertebrate Zoology, Patton and their colleagues describe how they surveyed 28 species of mammals studied by the late UC ornithologist Joseph Grinnell beginning in 1914. They covered many of Grinnell’s sites from the San Joaquin Valley across all of Yosemite, over the crest, and down to Mono Lake and then compared the results.

Their report is appearing with another one on the effects of climate change in Costa Rica by an international group headed by Robert K. Colwell, an entomologist at the University of Connecticut who was formerly also a UC Berkeley scientist.

The impacts of warming

Moritz and Patton note that since Grinnell completed his work, the central Sierra has seen continuous warming, with nighttime low temperatures averaging 5 degrees Fahrenheit higher than they were 90 years ago. During the same period, more than half of the species he studied have shifted their ranges upward by as much as 1,600 feet, the researchers said.

Many of the others, Moritz and Patton said, stayed put in ranges that shrank over time, largely the result of human development rather than climate change.

The California vole, the California pocket mouse and the western harvest mouse, for example, have all increased their ranges by moving up-slope, while the bushy-tailed wood rat and Allen’s chipmunk remained at lower levels but their ranges have diminished, the Berkeley scientists found.

Another chipmunk, the alpine species, saw its range shrink before it moved upward more than 2,000 feet seeking a friendly climate, Patton said. Ninety years ago, that same species of alpine chipmunk was common in lodgepole forests below 7,800 feet, but Patton said he found none living lower than 9,600 feet. As a result, he said, it may now face the risk of extinction because of its diminished range.

Similar changes are also endangering plant and insect species in some of the warmest places on Earth, according to the international survey team headed by Colwell, an evolutionary biologist.

In the tropics the climate has warmed by nearly 1.5 degrees Fahrenheit since 1975, Colwell’s report in Science notes, and climate models for the tropics indicate it could get hotter by nearly an additional 6 degrees before the end of the century.

Working their way up the forested slopes of Volcan Barba in Costa Rica – from sea level to the volcano’s summit at nearly 10,000 feet – Colwell and his team of scientists surveyed the ranges of 1,902 different species of insects and plants, including moths and ants, orchids, mosses, ferns, fungi and the shrubs and bushes that live beneath forest canopies.

Trouble ahead for insects

Based on their observations, the scientists foresee trouble ahead: As the climate warms, even in the wet tropics, Colwell said, the ranges of many insect species will become more isolated in their higher habitats.

Some species now living part way up the volcano will have to move their ranges as much as 2,000 feet higher if the climate heats up by as much as 6 degrees, and that will put them into wholly new environments facing competition that evolution hasn’t equipped them to face, the scientists said.

At the same time, species already living near the volcano’s summit will find themselves with nowhere higher to move. In Colwell’s words, they’ll face “mountaintop extinction” as the climate warms even more.

In the tropical lowlands, little opportunity exists for plants or animals to escape future increases in temperature by migrating either north or south – it’s all hot everywhere. So as temperatures increase, according to Colwell’s report, about half the species the Costa Rica team studied will disappear – unless they retained the genetic tolerance for greater heat that their ancestors possessed some 55 million years ago when the world was far hotter than it is now.

The others may seek new habitats in wetter regions that are at least somewhat cooler than where they live now, but even then the warming trend will increase the dangers from drought and forest fire.

So the future looks tough all over.