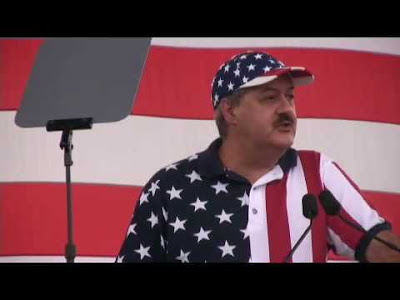 Don Blankenship, a “plump, soft-spoken accountant with a smirk.” Image from treehugger.com.
The porcine man:
Don Blankenship and the
Sordid history of A.T. Massey

[See Mine War on Blackberry Creek, the 30-minute 1986 documentary by Anne Lewis about the 1984 United Mine Workers of America strike against A.T. Massey — including her interview with now CEO Don Blankenship — here.]

Who is this porcine man (all apologies to the noble pig) wrapped in our country’s flag saying that federal regulation of mine safety is as “silly as global warming?” Why it’s Don Blankenship, CEO of A.T. Massey, the fourth largest coal extractor in the United States and now the source of the worst killings in a U.S. mine in 40 years.

The consistency of the record and its intersections are truly amazing — from neo-liberalism to ecocide to corruption to murder, this is a huge lesson in the dark side.

In 1984, I sat in Blankenship’s office looking out at a community (including the post office) that was hemmed in with barbed wire and armed guards. Blankenship was then president of Raul Sales, a wholly owned subsidiary of A.T. Massey. Don (I might as well use the familiar — he called me Anne) was delighted to show me the bullet pattern that marked the edge of his television set.

A plump, soft-spoken accountant with a smirk, he explained the progress offered by A.T. Massey to South African miners. He offered a social Darwinist analysis of capitalism, calling it “survival of the most productive.”

The interview and the rest of my film about the 1984 United Mineworkers (UMWA) strike against A.T. Massey — Mine War on Blackberry Creek — streams on www.annelewis.org. Rather than quote from the film or try to describe visuals, I would suggest a free viewing. The end of the film is a defeat of the strike, but a victory in the spirit of the men and women who fought for their right to have a union.

At the time I was making the film, my future partner was working underground less than 40 miles away from the Upper Big Branch Mine that exploded April 5. He worked in similar conditions, on a long-wall section in a gassy mine. The difference was that the mine was unionized. The union safety committee shut the mine down at least three times and the miners walked out. None were hurt and none were fired.

That’s one part of the story that’s missing. In all the talk of federal regulation there’s been no talk of the power of union rank and file miners to protect themselves. There’s one notable exception — Rush Limbaugh. Rush asks, referring to the explosion, “Where was the union?” Rush, that may be the best question you ever asked.

Less than 20% of the miners in this country are unionized at present. That’s scandalous and has a lot to do with Blankenship, his industry buddies, and reactionary labor law. In Canada, nearly every miner is in a union and there are almost no mining accidents. Strange coincidence? How about passing the Employee Free Choice Act so that miners could make the decision to be unionized.

And why aren’t we hearing anything about what the union thinks in the mainstream press? Here’s Cecil Roberts, President of the UMWA saying that Blankenship should be “handcuffed and in jail.”

The United Mineworkers fought for and won those regulations that Blankenship called “silly.” There’s miners’ blood on every coal mine health and safety regulation.

The other part of the story is just as sad and far more complex. There’s a picture of a floral arrangement taken at one of the 29 funerals this week that includes a hard hat with a sticker that reads “Friends of Coal.” Friends of Coal? That’s the group created by the West Virginia Coal Association that wants to educate us about the “new war the Environmental Protection Agency is waging against West Virginia coal” (would that it were so). That’s who brought us the Labor Day rally where Don Blankenship spewed his ecocidal and murderous garbage. 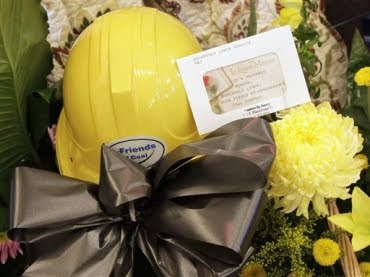 A miner’s hard hat was placed in a floral arrangement at the funeral of William Roosevelt Lynch. Photo by Amy Sancetta / AP.
And so the divisions within coal mining communities between the haves and the have-nots; the fight between those who would protect the environment and those desperate for jobs; the so-called individual “rights” of scabs versus community survival are used by Blankenship and A.T. Massey to do even more damage to a ravaged land and people.

I’m reminded of the great Hazel Dickens song — you can substitute “Blankenship” or “A.T. Massey” or “coal” for “black lung,” or leave the words to stand in their original power.

“Black lung, black lung, oh, your hand’s icy cold,
As you reach for my life and you torture my soul.
Cold as that water hole down in that dark cave,
Where I spent my life’s blood digging my own grave.”

[Anne Lewis is an independent filmmaker associated with Appalshop, senior lecturer at UT-Austin, and member of TSEU-CWA Local 6186 and NABET-CWA. She is the associate director of Harlan County, U.S.A and the producer/director of Fast Food Women, To Save the Land and People, Morristown: in the air and sun, and a number of other social issue and cultural documentaries. Her website is annelewis.org.]