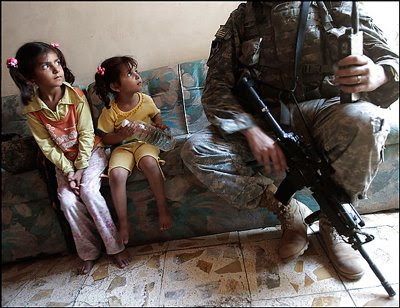 Children of U.S. military troops sought outpatient mental health care 2 million times last year, double the number at the start of the Iraq war, and there was also an alarming spike in the number of military kids actually hospitalized for mental health reasons.

Internal Pentagon documents show the increases, which come as the services struggle with wars in Iraq and Afghanistan and a shortage of therapists.

From 2007 to 2008, some 20 percent more children of active duty troops were hospitalized for mental health services, the documents show. Since the 2003 invasion of Iraq, inpatient visits among military children have increased 50 percent.

The total number of outpatient mental health visits for children of men and women on active duty doubled from 1 million in 2003 to 2 million in 2008. During the same period, the yearly bed days for military children 14 and under increased from 35,000 to 55,000, the documents show.

Overall, the number of children and spouses of active duty personnel and Guard and Reserve troops seeking mental health care has been steadily increasing as the military struggles with wars in Iraq and Afghanistan. Last year’s increase in child hospitalizations coincided with the ”surge” of tens of thousands of additional U.S. troops into Iraq to stabilize the country.

However, reasons for the treatment increases are not clear from the documents. Besides the impact of service members’ repeated tours in overseas war zones — and the severe economic recession that has affected all American families — the military has been encouraging troops’ family members to seek mental health help when needed.

Still, the statistics seem to reinforce the concerns of military leaders and private family organizations about the strains of the wars. Along with issues of separation, some families must deal with injuries or the deaths of loved ones.

”Army families are stretched, and they are stressed,” Sheila Casey, wife of Gen. George W. Casey Jr., the U.S. Army chief of staff, told a congressional panel last month. ”And I have often referred to them as the most brittle part of the force.”

Evidence of domestic violence and child neglect among military families, as well as an increase in suicide, alcohol abuse and cases of post-traumatic stress, are all troubling signs, Mrs. Casey told a Senate Armed Services subcommittee. She and other military spouses testified that gaining access to mental health care is a problem.

At summer camps organized by the National Military Family Association for about 10,000 children, most of them kids of deployed soldiers, there have been more anecdotal reports this year of young people taking medication, and showing signs of severe homesickness, anxiety, or depression, said Patricia Barron, who runs the association’s youth initiatives.

Barron, a military spouse, said her organization is participating in a study on deployments and families. She said much is still unknown about the effects.

The shortage of mental health professionals isn’t just isolated to the military. But the problem is more pronounced because of the increase in demand, both on the home front and in the war zones.

About 20 percent to 30 percent of service members returning from war report some form of psychological distress.

There are efforts under way to encourage the military, the Department of Veterans Affairs and state and local agencies to share mental health resources. Also, there have been incentives offered to encourage military spouses to enter easily transferrable fields such as health care.

In recent years, there’s been an increase in funding in areas such as education, housing and child care devoted to improving the quality of life for military families. First lady Michelle Obama has said helping military families is a priority.