Another ‘Mistake’ in Amerikkka’s War of Terror 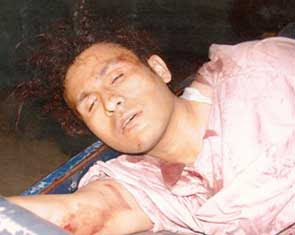 Abu Zubaida pictured shortly after he was captured in Pakistan. He appears to be bloodied and on some type of stretcher. Source: ABC News.
CIA Mistaken on ‘High-Value’ Detainee, Document Shows
By Peter Finn and Julie Tate / June 16, 2009

An al-Qaeda associate captured by the CIA and subjected to harsh interrogation techniques said his jailers later told him they had mistakenly thought he was the No. 3 man in the organization’s hierarchy and a partner of Osama bin Laden, according to newly released excerpts from a 2007 hearing.

“They told me, ‘Sorry, we discover that you are not Number 3, not a partner, not even a fighter,’ ” said Abu Zubaida, speaking in broken English, according to the new transcript of a Combatant Status Review Tribunal held at the U.S. military prison in Guantanamo Bay, Cuba.

President George W. Bush described Abu Zubaida in 2002 as “al-Qaeda’s chief of operations.” Intelligence, military and law enforcement sources told The Washington Post this year that officials later concluded he was a Pakistan-based “fixer” for radical Islamist ideologues, but not a formal member of al-Qaeda, much less one of its leaders.

Abu Zubaida, a nom de guerre for Zayn al-Abidin Muhammed Hussein, told the 2007 panel of military officers at the detention facility in Cuba that “doctors told me that I nearly died four times” and that he endured “months of suffering and torture” on the false premise that he was an al-Qaeda leader.

Abu Zubaida, 38, was subjected 83 times to waterboarding, a technique that leads victims to believe they are drowning and that has been widely condemned as torture. The Palestinian was held at a secret CIA facility after his capture in Pakistan in March 2002.

The Abu Zubaida transcript, and those of five other “high-value detainees,” including Khalid Sheik Mohammed, the self-proclaimed mastermind of the Sept. 11, 2001, attacks, were released in response to a Freedom of Information Act request and lawsuit by the American Civil Liberties Union. Versions of the transcripts were released by the Pentagon in 2007.

Abu Zubaida, Mohammed and 12 other high-value detainees were transferred to Guantanamo in September 2006 and continue to be held there at Camp 7, a secret facility at the naval base, part of a total population of 229 detainees.

The United States and the 27-nation European Union also issued a joint statement yesterday noting that “certain Member States of the European Union have expressed their readiness to assist with the reception of certain former Guantanamo detainees, on a case-by-case basis.”

The statement said the United States “will consider contributing to the costs” of resettling detainees in Europe.

Although little new information was released in the hearing transcript for Majid Khan, an alleged associate of Mohammed and a former resident of Baltimore, the extent of the redactions is more apparent in the latest document. When referring to his treatment at CIA “black site” prisons, the Pakistani’s transcript is blacked out for eight consecutive pages. In the version released earlier, this entire section was marked by a single word: “REDACTED.”

Similar redactions appear in other transcripts released yesterday. The ACLU said the continued level of redaction was unacceptable and vowed to return to court to press for unexpurgated transcripts.

“The only conceivable basis for suppressing this testimony is not to protect the American people but to protect the CIA from legal accountability,” said Ben Wizner, a staff attorney for the ACLU. “There is no reason to continue to censor detainee abuse allegations.”

George Little, a CIA spokesman, said, “The CIA plainly has a very different take on its past interrogation practices — what they were and what they weren’t — and on the need to protect properly classified national security information.”

The new transcripts provide some limited new insight into the interaction between the CIA and its prisoners.

Mohammed, who was waterboarded 183 times, appears to have invoked the U.S. Constitution to protest his treatment.

He described the response he received: “You are not American, and you are not on American soil. So you cannot ask about the Constitution.”

Mohammed also said he lied in response to questions about bin Laden’s location.

This entry was posted in RagBlog and tagged Criminal Justice, Torture, War Crimes, War on Terror. Bookmark the permalink.