Another of the "Coalition of the Willing" Leaves 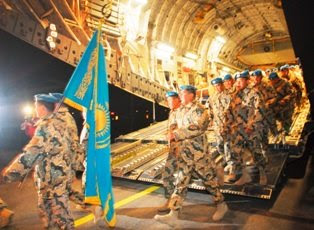 The strategic seismic shockwave unleashed throughout the former Soviet Union by the August military confrontation between Georgia and Russia continues to reverberate throughout the Caucasus and Central Asia, as national leaders there reassess their relationships with Washington and Moscow. During the clash Azerbaijan, unable to use either the Baku-Tbilisi-Ceyhan pipeline or its backup oil export routes through Georgia, shifted petroleum exports northward to Russia through the Baku-Novorossiysk line and initiated its first oil swap with Iran, both temporary solutions that Baku is now considering extending.

As the conflict has put an apparent chill on Caspian and Caucasian nations’ interest in new pipelines ignoring the Kremlin’s wishes, the momentum against embracing unilateral military relations with the U.S. also seems to be gathering pace. On October 22 Kazakhstan, the Caspian’s other rising petro-state, provided Washington with a small but significant military gesture in the aftermath of the Caucasus clash by withdrawing its peacekeepers from Iraq. In a concurrent move largely unnoticed in the media, Georgia has also withdrawn its forces.

In its Iraq Weekly Status Report the U.S. Department of State briefly noted:

The Kazakh Ministry of Defense (MoD) press service was more forthcoming and posted an announcement about the withdrawal on its website in Russian but, interestingly enough, not in Kazakh or English (http://www.mod.kz/indexd0a5.html?post=9&id=1263(=rus)).

The MoD noted, “In five years Kazakhstan’s peacekeeping contingent completely fulfilled its task and completed its mission in Iraq. At the request of the government of Iraq and in connection with the significant stabilization of the situation, Kazakh soldiers returned home.”

Defense Minister Daniyal subsequently commented on the contingent’s performance during a working visit to the Atyrau region, telling journalists:

“We withdrew our group from Iraq. Our soldiers did a very decent job, defusing more than 5 million mines and stocks of ammunition and shells. Kazakh doctors, together with their Iraqi colleagues and counterparts from other countries, provided medical assistance to more than 500 Iraqis. I am satisfied overall with the actions of our units in Iraq. Our troops gained experience working in difficult conditions. And most importantly, the military fulfilled a very important duty and assisted in restoring peace and stability in the country” (Nomad, October 22).

The symbolic value of the Kazakh presence in Iraq, which began in September 2003, far outweighed its actual numbers at any given time. Over five years nine contingents totaling 290 Kazakh peacekeeping troops were rotated through Iraq, most recently last May.

If the withdrawal of Kazakh troops from Iraq symbolizes Astana’s changing bilateral military relationship with Washington in the twilight of the Bush administration, its larger military commitments to the North Atlantic Treaty Organization remain undiminished. While in Atyrau, Akhmetov reaffirmed Kazakhstan’s intention to maintain its Partnership for Peace (PfP) relationship with NATO. In commenting on his recent visit to Brussels, Akhmetov said, “We received a positive assessment of the Republic of Kazakhstan’s cooperation with this very important bloc. The partnership is particularly effective in such areas as peacekeeping and the security sector, for example, assistance on land and at sea” (Kazinform, October 23). Last month Kazakh, British, and U.S. troops held their annual “Steppe Eagle 2008” joint peacekeeping exercise near Almaty from September 15 to September 27, which was attended by the NATO Secretary General’s Special Representative for the Caucasus and Central Asia, Ambassador Robert F. Simmons (www.nato.int/docu/update/2008/09-september/e0915e.html).

While the U.S. can hardly be happy about losing another member of the rapidly dwindling “coalition of the willing,” it seems that Astana is merely deemphasizing unilateral military commitments to Washington and merging them with larger multilateral structures, such as NATO and the OSCE.

If the U.S. administration is perturbed about the political fallout from the Caucasian confrontation with its new-found Eurasian allies, Moscow is equally distressed. Russia has also drawn lessons from its confrontation with Georgia about the reliability of its relations with its Commonwealth of Independent States associates Armenia, Azerbaijan, Belarus, Kazakhstan, Kyrgyzstan, Moldova, Tajikistan, Ukraine, and Uzbekistan and associate member Turkmenistan (Georgia, under Section 1, Article 9 of the CIS Charter served notice on August 18 of its intention to withdraw, which becomes effective on August 17, 2009).

On September 22 President of the Russian Academy of Military Sciences General Makhmut Akhmetovich Gareev commented bitterly about the tepid response of Russia’s CIS colleagues to the Georgian crisis, remarking,

The entire West came out against us and CIS countries are vacillating to this day following Russia’s decisive actions in South Ossetia and Abkhazia, and against this general background the old truth was clearly highlighted once again: under all circumstances only two allies, the Army and Navy, invariably remain for Russia at a difficult time (Krasnaia Zvezda, October 22).

Disappointment in partners aside, perhaps bellicose politicians in both Moscow and Washington might reflect upon the old Russian peasant proverb, “It’s a broad road that leads to war, but a narrow path that leads home again.” As both nations are finding out, their soldiers are walking that path increasingly alone.

This entry was posted in RagBlog and tagged Foreign Policy, Iraq, Russia. Bookmark the permalink.