Another Species Is Biting the Dust 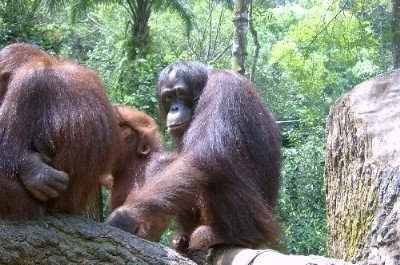 BANGKOK, Thailand – – Orangutan numbers have declined sharply on the only two islands where they still live in the wild and they could become the first great ape species to go extinct if urgent action isn’t taken, a new study says.

The declines in Indonesia and Malaysia since 2004 are mostly because of illegal logging and the expansion of palm oil plantations, Serge Wich, a scientist at the Great Ape Trust in Iowa, said on Saturday.

The survey found the orangutan population on Indonesia’s Sumatra island dropped almost 14 percent since 2004, Wich said. It also concluded that the populations on Borneo island, which is shared by Malaysia, Brunei and Indonesia, have fallen by 10 percent. Researchers only surveyed areas of Borneo that are in Indonesia and Malaysia.

In their study, Wich and his 15 colleagues said the declines in Borneo were occurring at an “alarming rate” but that they were most concerned about Sumatra, where the numbers show the population is in “rapid decline.”

“Unless extraordinary efforts are made soon, it could become the first great ape species to go extinct,” researchers wrote.

The number of orangutans on Sumatra has fallen from 7,500 to 6,600 while the number on Borneo has fallen from 54,000 to around 49,600, according to the survey on the endangered apes, which appears in this month’s science journal Oryx.

“It’s disappointing that there are still declines even though there have been quite a lot of conservation efforts over the past 30 years,” Wich said.

Indonesia and Malaysia, the world’s top two palm oil producers, have aggressively pushed to expand plantations amid a rising demand for biofuels which are considered cleaner burning and cheaper than petrol.

Wich and his colleagues said there was room for “cautious optimism” that the orangutan could be saved, noting recent initiatives by Indonesian leaders.

Indonesian President Susilo Bambang Yudhoyono announced a major initiative to save the nation’s orangutans at a U.N. climate conference last year, and the Aceh governor declared a moratorium on logging.

Coupled with that are expectations that Indonesia will protect millions of acres of forest as part of any U.N. climate pact that will go into effect in 2012. The deal is expected to include measures that will reward tropical countries like Indonesia that halt deforestation.

“There are promising signs that there is a lot of political will, especially in Aceh, to protect the forest,” Wich said, adding however that much more needs to be done.

“What matters is that the rate of decline is increasing, and unless something is done, the wild orangutan is on a quick spiral towards extinction, whether in two years, five years or 10 years,” Desilets said in an e-mail.

In their paper, the researchers recommended that law enforcement be boosted to help reduce the hunting of orangutans for food and trade. Environmental awareness at the local level must also be increased.

“It is essential that funding for environmental services reaches the local level and that there is strong law enforcement,” the study says. “Developing a mechanism to ensure these occur is the challenge for the conservation of the orangutans.”

The study is the latest in a long line of research that has predicted the orangutans demise.

In May, the Center for Orangutan Protection said just 20,000 of the endangered primates remain in the tropical jungle of Central Kalimantan on Borneo island, down from 31,300 in 2004. Based on that estimate, it concluded orangutans there could be extinct by 2011.

This entry was posted in RagBlog and tagged Ecology, Endangered Species, Environment. Bookmark the permalink.