Another Story of Police State Amerikkka: Plans for Economic Unrest

For cryin’ out loud, read what these clowns are planning. They are scared to death of their constituencies. And THAT scares me to death. First they trash the system, then they effectively scapegoat us for it having happened. What a deal !! 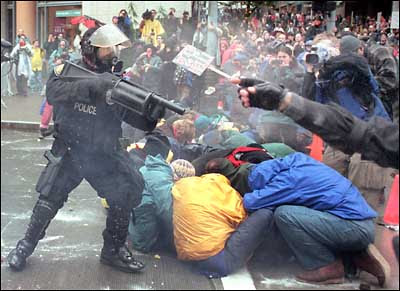 A new report by the U.S. Army War College talks about the possibility of Pentagon resources and troops being used should the economic crisis lead to civil unrest, such as protests against businesses and government or runs on beleaguered banks.

“Widespread civil violence inside the United States would force the defense establishment to reorient priorities in extremis to defend basic domestic order and human security,” said the War College report.

The study says economic collapse, terrorism and loss of legal order are among possible domestic shocks that might require military action within the U.S.

International Monetary Fund Managing Director Dominique Strauss-Kahn warned Wednesday of economy-related riots and unrest in various global markets if the financial crisis is not addressed and lower-income households are hurt by credit constraints and rising unemployment.

State and local police in Arizona say they have broad plans to deal with social unrest, including trouble resulting from economic distress. The security and police agencies declined to give specifics, but said they would employ existing and generalized emergency responses to civil unrest that arises for any reason.

Clark, Hill and other local police officials said the region did plenty of planning and emergency management training for the Super Bowl in February in Glendale.

Super Bowl security efforts included personnel and resources from the U.S. Department of Homeland Security and U.S. military’s Northern Command, which coordinated with Arizona officials. The Northern Command was created after 9/11 to have troops and Defense Department resources ready to respond to security problems, terrorism and natural disasters.

Northern Command spokesman Michael Kucharek and Arizona Army National Guard Major. Paul Aguirre said they are not aware of any new planning for domestic situations related to the economy.

Nick Dranias, director of constitutional government at the libertarian Goldwater Institute, said a declaration of marital law would be an extraordinary event and give military control over civilian authorities and institutions. Dranias said the Posse Comitatus Act restricts the U.S. military’s role in domestic law enforcement. But he points to a 1994 U.S. Defense Department Directive (DODD 3025) he says allows military commanders to take emergency actions in domestic situations to save lives, prevent suffering or mitigate great property damage.

Dranias said such an emergency declaration could worsen the economic situation and doubts extreme measures will been taken. “I don’t think it’s likely. But it’s not impossible,” he said.

The economy is in recession. Consumer spending is down, foreclosures are up and a host of businesses are laying off workers and struggling with tight credit and the troubled housing and financial markets. The U.S. Federal Reserve Bank and U.S. Treasury Department have pumped more than $8.5 trillion into the economy via equity purchases of bank stocks, liquidity infusions, Wall Street and bank bailouts and taxpayer rebates. U.S. automakers are seeking more than $14 billion in federal loans with fears they could fall into bankruptcy without a bailout. The U.S. housing and subprime lending-induced recession also has hit economies in Europe, Japan and China.

Glendale Police spokesman Jim Toomey said the West Valley suburb developed new emergency plans with the approach of Y2K computer changeovers leading up to the year 2000 and police have updated those plans several times including after 9/11. Toomey said strategies to deal with public unrest usually involve deploying personnel and equipment to deal with specific incidents while still providing usual services.

Thanks to Richard Myers, MDS / The Rag Blog

4 Responses to Another Story of Police State Amerikkka: Plans for Economic Unrest