Ansel Herz : Behind the Barricades in Haiti 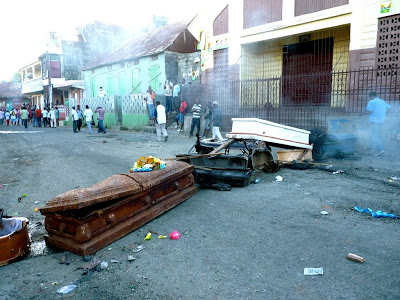 CAP-HAITIEN, Haiti — The first barricade looked harmless enough. Foot-long rocks piled next to each other in a line.

But as the bus driver slowed down, flying rocks landed in the street — thrown by youths crouching in the bushes up the hill.

“We don’t really have a country! The police don’t do anything!” a nun sitting across from me complained after the bus driver negotiated, with a little cash, our way past.

The man next to her said the country will always be mired in problems until a leader like Hugo Chavez or Fidel Castro takes power.

We must have passed a dozen more barricades, most unmanned.

After Limbe, where cholera has killed at least 100 people, we came to the biggest “barikad” yet in the highway. Thick trees lay across the road and hundreds of people, a few holding machetes, blocked the way.

The bus driver once again descended to negotiate, but didn’t appear to be making any progress. Most passengers grabbed their belongings and got out.

I decided to go too. As I gathered my things, there was a debate among the remaining passengers:

MINUSTAH is the acronym for the UN peacekeeping mission. As I stepped off the bus, people standing at the road called me over and urged me not to go. It was the third day of so-called “cholera riots” against foreign troops blamed for introducing the disease into the country.

Someone said the protesters are violent “chimere,” a word for political gangs. I explained that it’s my job as a journalist to go talk to them.

Then two Haitian journalists who were on the bus pushed their way through the crowd and wrapped their arms around me. Everyone agreed, finally, that together with the two guys I could get through the barricades.

Elizer and Duval were coming back home to Cap-Haitien. They were scared for me, saying under no circumstances should I talk with protesters or take photos. I reluctantly agreed to follow their instructions.

I wondered if perhaps the UN peacekeeping mission was right in saying these protests were organized by a politician or gang. “Enemies of stability and democracy,” MINUSTAH mission head Edmond Mulet called them. So far, I’d only seen young men in the street.

But as we passed through each barricade, everyone — young girls and rotund market women mingling with demonstrators — yelled out, “MINUSTAH ou ye?”

I yelled back, “Non, mwen se yon journalis Amerikan.” The suspicious stares softened into smiles and understanding looks. After passing the third barricade that way, we started laughing.

One teenager who threw a rock at us as we approached on motorcycle said, “pa gen pwoblem” — no problem — after I held out my press badge.

As we arrived on the outskirts of Cap-Haitien proper, the streets were deserted except for people gathered around barricades. One was still flaming. At another, dozens of men milled around a burnt out car.

“Press! Press!” I called out, and they beckoned me through the crowd, many hands pushing me forward until I was through.

I was glad when an elderly man walking in the street stopped me. I finally had a chance to do an interview, against the advice of my companions. I whipped out my audio recorder. He was Amos Ordena, the local section’s elected Kazek — an official dispute mediator.

“The population has information that MINUSTAH introduced cholera,” he told me. “So many people have died. They’re obligated to hold fast, to demonstrate, so that the authorities will take responsibility. They’re asking MINUSTAH to leave the country.” 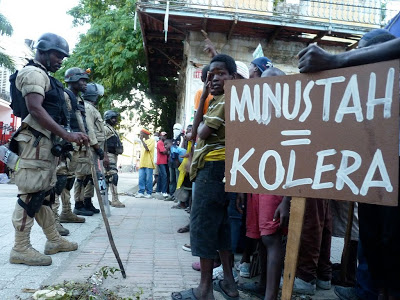 Haitian street demonstrators want the UN’s MINUSTUH troops to leave. Photo by Ansel Herz / Mediahacker / The Rag Blog.
Asked if the protests are by a single group or the general population, he said all elements of society are participating in “the movement.” He said MINUSTAH are not firing weapons in self-defense, in the air to disperse protesters, but firing at people. He heard that at least one person had died earlier in the day.

We finally turned off the main road and walked into an alleyway. Elizer’s modest home was at the end (he lost his wife, children, and house in the capital in the earthquake). One of his brothers, blind and handicapped, lay on the floor beneath a television showing a soccer match. He smiled and introduced himself when I walked in.

Elizer reminded me to use hand sanitizer. Then his frail mother, beaming at us, served us fresh mais moule (corn) and papaya juice.

A neighbor of Elizer called up TV reporter Johnny Joseph, who came to meet me and help me get to the house where I was planning to stay. Elizer refused to accept any money for all his trouble.

Before leaving with Johnny, I spoke to Aristil Frito, a 24-year-old student standing outside talking with his neighbors. “The objective of the movement is clear: they’re asking for the departure of MINUSTAH.”

He said irresponsibility by the leaders of the country had led to this situation. In a more developed country, without so many young unemployed people in the street, the protests might have been more peaceful, he said.

“But the real solution is for people to live in a climate of peace, in dialogue. Today all Haitians should work together finish with hunger and poverty,” he said. “The best solution is the promotion of social dialogue.”

Johnny and I hopped on a motorcycle taxi, taking backstreets to bypass the barricades. We passed a five-foot deep trench dug in a narrow dirt road. Johnny said a MINUSTAH vehicle fell into the trench Wednesday and people threw bottles at them. The troops opened fire, killing an innocent bystander whose body was taken downtown, he said.

At one junction, a young man in a purple shirt and black cap blocked our path and stuck out a knife as his friends looked on. I realized my press badge was tucked into my shirt. I pulled it out as Johnny talked the man down.

“You need to have your badge out,” the young man told me, glaring. “It’s a principle.” That’s been the only instance of serious hostility directed at me since I arrived in Cap Haitien.

So it’s bewildering to read the reporting of CNN’s Ivan Watson, who claimed that armed rioters control the city. He told viewers while being filmed on the back of a fast-moving motorcycle that it’s only way to move about the city amidst “violent protests.”

He doesn’t use that adjective to describe the actions of UN troops, accused of killing at least three demonstrators since Monday.

“They shot many people. We took them to the hospital. We’re asking MINUSTAH to leave the country,” a middle-aged man who declined to give his name told me.

He stopped bicycling past an intersection barricaded with coffins to stop and share his anger. “We have bottles, we don’t have guns to shoot them, but they’re shooting us. We have to defend our rights, MINUSTAH is a thing that doesn’t work in this country.”

Another of Watson’s reports claimed that Christian missionaries were forced to speed on a bus away from out-of-control-mobs, like in a Hollywood-style chase scene.

As I walked towards the downtown’s central public square on Wednesday, finally nearing the house, I saw several dozen people facing Haitian police in full riot gear standing in their way.

They said they had no beef with foreigners generally — only MINUSTAH.

Theodore Joel said they respected the Haitian police, because they’re brothers and family — though two police stations were reportedly set on fire during the first day of protests.

“Those soldiers are tourists! The money that’s invested in MINUSTAH — they could invest that money in education. They could invest in constructing hospitals, in cleaning up the country. but they’re paying those soldiers instead. We don’t have guns like in 1803… but each time we put our heads together, we’re marked in history.”

Thursday marked 203 years since the Battle of Vertières, where Jean-Jacques Dessalines led the final major assault on French armies to drive them off Haitian soil. They renamed the city: from Cap Francois to Cap-Haitien.

While many expected demonstrations to continue in commemoration of Haiti’s independence struggle, the streets were quiet. No further confrontations were reported. I walked around downtown Cap on my own, trying to find an Internet connection to send out a radio story.

I’m asking everyone I meet here — from local journalists, vendors, men at the barricades, to a local magistrate — if these protests were organized by a gang or political group.

The unanimous answer is no — people are fed up with UN peacekeepers and the cholera outbreak is the straw that broke the camel’s back. The magistrate said he understands and respects the people demonstrating, but he wishes the barricades weren’t impeding the transportation of medical supplies to fight cholera in his commune, where people are dying in the street.

As the head of MINUSTAH warned that “every second lost” because of protests means more suffering and death from cholera, the anti-UN demonstrations continued in Port-au-Prince on Thursday.

CNN’s Watson led his report this way: “Like cholera itself, Haiti’s protests against the United Nations spread Thursday to the capital, Port-au-Prince, as angry people took to the streets demanding the global body get out of their country.”

Seems that for Watson, these protests are like a disease. It continues: “a planned protest began peacefully in the center of the city but turned violent as it moved toward the presidential palace, with one woman overcome by tear gas, witnesses said.”

Again, the protesters are the ones implicated in the violence. But a timeline report released by International Action Ties, an independent human rights monitoring group, said the demonstrations were largely peaceful after returning to Champs de Mars plaza.

UN troops and Haitian police fired at least 30 tear gas canisters into the Faculty of Ethnologie and surrounding tent camps, the report said, sending children and old women fleeing into the streets. Police ignored the group’s pleas to stop firing.

Are protests against the UN meant to destabilize the country? Are Haitians who’ve taken to the streets being used, like puppets, by powerful politicians for their own ends? Are the protests violent?

The foreigners I’ve talked to say yes. A few American liberals living in Haiti tell me they fear the protests are violent and meant to cause chaos, echoing the statements of MINUSTAH and reporters like Watson. Some Haitians in the professional middle class don’t want to participate.

But most Haitians I’ve spoken with say no. They say this is the inevitable outcome when troops who operate in Haiti with seeming impunity may have introduced a deadly, misery-multiplying disease into the country. It’s an angry, popular movement — protesting however they can, emotions running high — against a five-year-old foreign occupation.

What do you think? We’ll see how this plays out in the next nine days, ahead of the Nov. 28 election. Stay tuned.

[Ansel Herz, a former Austin activist, is a multimedia journalist and web designer based in Port-Au-Prince, Haiti. This article first appeared on Ansel’s blog, Mediahacker.]

4 Responses to Ansel Herz : Behind the Barricades in Haiti