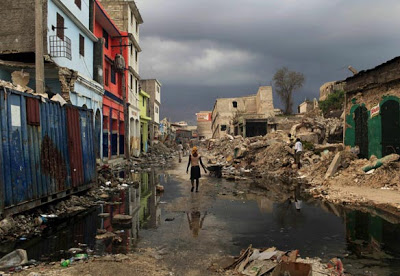 “The U.N. is a big, huge, heavy bureaucracy. And bureaucracies do not work well in places that need flexibility and adaptation.” — Jean Luc “Djaloki” Dessables, Haiti Response Coalition

PORT-AU-PRINCE — On an empty road in Cite Militaire, an industrial zone across from the slums of Cite Soleil, a group of women are gathered around a single white sack of U.S. rice. The rice was handed out Monday morning at a food distribution center by the Christian relief group World Vision.

According to witnesses, during the distribution U.N. peacekeeping troops sprayed tear gas on the crowd.

“Haitians know that’s the way they act with us. They treat us like animals,” said Lourette Elris, as she divided the rice amongst the women. “They gave us the food, we were on our way home, then the troops threw tear gas at us. We finished receiving the food, we weren’t disorderly. “

Some 9,000 U.N. peacekeepers, known by the acronym MINUSTAH, have occupied Haiti since 2004, including 7,000 soldiers of which the majority are Brazilian. The mission has been dogged by accusations of human rights violations.

“MINUSTAH’s mandate is to maintain the peace, that is, security, but the U.N. needs to realise that its mission is no longer solely to strengthen security but also to build the infrastructure,” he said.

So far, there’s no evidence of a shift in policy.

“Red zones are no-go zones, you’re not supposed to be there whatsoever,” said Regine Zamor, a Haitian-American who arrived days after the earthquake to find her family. She’s been coordinating among NGOs to distribute aid in Carrefour Feille, one of the hardest-hit areas of the city.

“We only found out for folks in our community that it was a red zone because we weren’t getting any help,” she said. “That green, yellow, and red zoning actually comes from maps when there’s war, but there’s no war here in Haiti.”

Even the famous Oloffson Hotel in downtown Port-Au-Prince is part of the red zone, according to Zamor and the hotel’s outspoken owner, Richard Morse.

U.N. spokesperson George Ola-Davies provided IPS with a copy of a security zoning map, showing red zones only over the slum areas of Cite Soleil and Bel Air.

“Security measures start with oneself, so everyone’s been advised to be cautious,” he said. “Kidnapping is not a new phenomenon in Haiti. It was at a peak at one time, then it went down. Now it’s starting again.”

Two Doctors Without Borders staff members were kidnapped this month in Petionville, an upscale district zoned as green on the security map — then released for a ransom.

Meanwhile at the U.N. headquarters near the airport, Haitians looking to coordinate relief efforts with aid agencies are routinely turned away at the gate, if they don’t possess U.N. passes.

The mayor of Cite Soleil and a camp committee member from Leogane were nearly blocked from entering the base, according to Emilie Parry, co-author of a Refugees International report blasting the U.N. for not involving Haitian community-based organizations in the relief effort.

“We were concerned they would be kicked out,” Parry said. “So we walked with them to try and identify agencies and people working in their communities — there weren’t many. Like most others, they were turned away and went home empty-handed.”

U.N. spokesperson Ola-Davies said any Haitian who has an appointment can enter the base. Dozens of shining white Toyota and Nissan sport utility vehicles shuttling aid workers around the city enter and exit the base each day.

“The U.N. is a big, huge, heavy bureaucracy. And bureaucracies do not work well in places that need flexibility and adaptation. Haiti is one of those places,” said Jean Luc “Djaloki” Dessables, co-coordinator of the Haiti Response Coalition, a group that includes small Haitian organisations.

The Haiti donors’ conference begins Wednesday at U.N. headquarters in New York City. The Haitian government estimates 11.5 billion dollars are required to recover from the quake.

The U.N. peacekeeping mission spends 700 million dollars annually. A new Brazilian force commander was appointed this month, while the number of U.S. soldiers on the island dwindles further.

In Potay, a neighborhood near downtown Port-Au-Prince, a dozen U.S. soldiers toting automatic weapons walked past men drinking beer on a stoop.

Wearing jeans and a black vest, Brital, one of Haiti’s most well-known rappers with the Barikad Crew, watched them go past his collapsed home.

“I don’t think we need soldiers with guns. We need engineers the most,” he said. “I’d prefer to see soldiers who could educate instead of those with guns. Soldiers that can come and build roads, bridges, universities and hospitals.”

U.S. Senator Chris Dodd proposed Monday placing Haiti under a trusteeship system and broadening the U.N. mission in the country. He wrote in the Miami Herald that Haiti should not be occupied by foreign powers, but that the country is incapable of leading its own reconstruction.

Thanks to David Holmes Morris / The Rag Blog