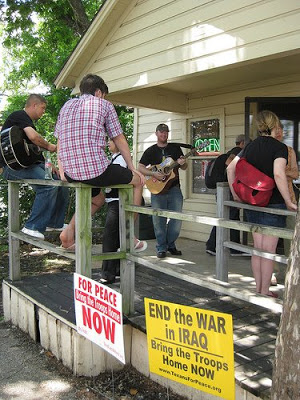 Memorial Day at Under the Hood. GI’s gather at coffee house before marching for peace. Photo by Alice Embree / The Rag Blog.

War may seem to be a million miles away to much of the population, but it is never more than a deployment order away from the minds of these young soldiers.

Killeen, Texas is nestled up to Fort Hood, the largest military base in North America, where soldiers are on a rapid deployment schedule to Afghanistan. On Memorial Day, I joined about 70 people at Under the Hood Café on College Street in Killeen for a peace march led by active duty soldiers.

An antiwar presence is surprising enough in a military town, but I must say that the reaction of people who drove by with thumbs up signs and honks of support was even more surprising. We marched in the blazing Texas sun for more than a mile to a point across from the East Gate before returning to the shelter of Under the Hood. Two of the soldiers who led the march have recently made their resistance known, issuing statements on why they won’t go to Afghanistan. See related Rag Blog stories [links below].

Killeen is a tired military town, full of tattoo parlors and other businesses catering to GIs. In contrast, the suburbs of Copperas Cove and Harker Heights seem to be full of new and shiny franchises.

Under the Hood has been open since February 1, gradually becoming known as a “free speech zone” for GIs –- a place where soldiers can gather, throw darts, play guitar, surf the internet, and occasionally get treated to Manager Cindy Thomas’ Spanish rice. The Memorial Day fare also included barbeque, beans, and home-made cookies. War may seem to be a million miles away to much of the population, but it is never more than a deployment order away from the minds of these young soldiers.

“Get up. Get down. There’s an anti-war movement in this town.”

A group of active-duty Fort Hood soldiers and nearly 70 other anti-war protesters took to the streets of Killeen Monday afternoon in the city’s first peace march since the Vietnam War.

Toting picket signs that read, “War is not the answer,” and “Blessed are the peacemakers,” the demonstrators gathered for one common purpose –- to call for an end to the wars in the Middle East.

The action, held on Memorial Day, was organized to honor the nation’s fallen soldiers, and help prevent the further loss of lives in Iraq and Afghanistan.

“We’re paying homage to the ones we’ve lost. We don’t want to lose anymore,” said Chris Saylor, an Iraq War veteran who traveled from Detroit to participate.

The protest was organized by Under the Hood Cafe –- a local outreach center for soldiers. Members from peace organizations across Texas as well as college students, active-duty soldiers and veterans came out to show their support.

The march began at the cafe house at 17 College St. and continued down Veteran’s Memorial Boulevard to Fort Hood Street and then up to Fort Hood’s East Gate.

The demonstrators waved colorful flags decorated with peace symbols and chanted slogans like, “They’re our brothers, they’re our sisters. We support war resistors,” and “What do we want? Peace! When do we want it? Now!”

Many people honked their car horns as they drove by. Not all the responses were positive, however. One man shouted, “You don’t have the right to do this!” as he drove by.

Ben Fugate, an Army specialist who returned from Iraq two months ago, was one of several Fort Hood soldiers who came to the event. Wearing a black T-shirt with the slogan, “Got rights?” Fugate called the Iraq war “unjustified” and recently decided to speak out against it.

“They say they’re there to build up Iraq, but all you see is destruction of Iraq,” he said. “There are thousands of guys who are not coming home to their mom and dad. I lost three buddies in my platoon in Iraq and for what? Why lose more when we don’t have to?”

Cindy Thomas, manager of Under the Hood Cafe and the protest’s organizer, said she hopes the day’s action will influence other military community members to speak out.

Other related material from The Rag Blog: