Arianna Huffington on Obama : Time For Some Righteous Rage 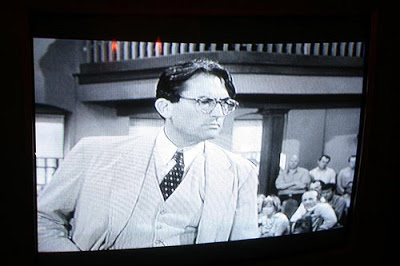 Gregory Peck as Atticus Finch in ‘To Kill a Mockingbird’ : Righteous rage.
‘It’s time for Obama to unleash his inner Atticus’
By Arianna Huffington / September 10, 2008

Back in February 2007, I wrote about the role casting would play in the presidential race, and the American public’s readiness to replace the John Wayne take-no-crap-cowboy model of leadership with a Gregory Peck-does-Atticus Finch archetype.

Given Obama’s sense of moral obligation and social responsibility, and his “audacity of hope,” I felt “the man and the moment may be made for each other.”

Now, as the crises facing our country intensify, and the campaign McCain is running becomes sleazier and more trivial, it’s time for Obama to unleash his inner Atticus — or at least the key element of Finch that Obama seems reluctant to embrace: righteous rage.

“Finch had the riotous fire of all the great prophets in the Judeo-Christian tradition,” John Cusack told me during our back-and-forth email conversation of the last few days. “He unleashes that fire in his final, great courtroom speech. If he didn’t, if he refused to unleash his anger and contempt at the horror and immorality of racism, he would prove himself to be an unemotional man unworthy of our love and respect. Obama has waited long enough to show us this side of himself. Besides, we need to know that he can be a mean motherfucker if he wants this job.”

Obama has demonstrated a laudatory levelheadedness — the ability to keep his head while those around him were losing theirs — over the long haul of the ’08 campaign, always presenting a cool and unruffled image. And it has served him well.

This is clearly part of Obama’s lifelong attempt to present a nonthreatening persona, what Shelby Steele has dubbed the “iconic Negro.” Think Oprah, Michael Jordan, and Tiger Woods. Now picture them in your mind… they’re smiling aren’t they?

Being likeable is obviously a good thing in politics. So is being analytical and thoughtful and composed. But the last seven-plus years demand more than a detached analysis — and certainly more than a beaming smile.

Obama has often said that he is running because of what Dr. King called “the fierce urgency of now.” He needs to show that fierceness and that urgency.

When we think of King, we usually think of him as resolute and dignified. But, as Michael Eric Dyson points out, King was also filled with a prophetic anger, especially in the later years of his life, when he turned his attention to fighting poverty, entrenched racism, and the Vietnam War.

As a leader fighting for fundamental change in this country, Obama has to be willing to show us that kind of righteous anger. I don’t know about you, but when I think about what George Bush has done to this country — and what John McCain wants to keep doing — I consider outrage the only rational and legitimate response. So why don’t we see this outrage from Obama?

And now, to all that the Republicans have done to America, we have to add the gutter campaign they are running in a desperate effort to win the White House. You know the McCain campaign has sunk into the cesspool when seen-it-all Beltway denizens like Joe Klein and Mark Halperin start looking for the barf bag.

HuffPoster John Neffinger has dubbed McCain’s sleazy sex ed attack ad Obama’s “Dukakis Moment” — the time for him to avoid looking emotionally detached and “show America how he behaves when something despicable is done to him, so we can all see how he would behave as our leader if something despicable were done to us — as it was on 9/11.”

The fear of activating the residual racism provoked by the caricature of the “angry black man” should no longer hold sway. As John Cusack points out, over the last 40 years, popular culture has been “filled with images of strong, powerful black actors who have been able to express righteous rage and still capture our affection and respect. From Sidney Poitier to Denzel Washington, Will Smith, and Morgan Freeman — these are men who have the inherent dignity to express the kind of cosmic rage that comes from being human and responding to injustice. They are perceived as authentic and powerful precisely because they show us their anger as they fight for what is right and true and good. If they didn’t, we wouldn’t respect them.”

Picture Poitier as Virgil Tibbs in In the Heat of the Night when Rod Steiger’s southern sheriff mocks his “funny name for a nigger boy from Philadelphia” and asks, “What do they call you up there?”

Righteous rage drips from every syllable of his five-word answer: “They call me Mister Tibbs!” See below for the Poitier clip and others with Washington, Freeman, Smith, and Don Cheadle.

Obama clearly has it in him. We saw a flash of it in Denver when he announced: “Enough!”

Paul Slansky writes that this single word — filled as it is with outrage and the echoes of the outrages perpetrated by Bush and McCain — should become the theme of the campaign: “‘Enough!’ is a rallying cry, a direct descendant of Network’s ‘I’m mad as hell and I’m not going to take it anymore.’ It invites audience participation at every campaign stop. There is something cathartic about screaming in unison: ‘Enough!!'”

To fully become the transformational leader we need, Obama must demonstrate to the American people his capacity for indignation — for the kind of ferocious passion that fueled King and Nelson Mandela. He has to fight fire with fire, and wield anger in the service of what right, true, and good. The fierce urgency of now demands nothing less.