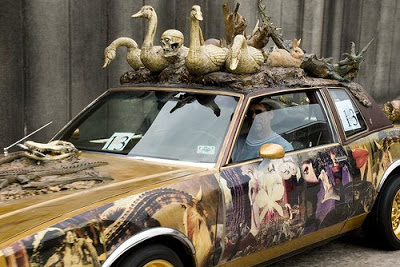 Tom was a great guy and he will be missed terribly.

This picture was taken yesterday as he arrived for the parade, the last time I saw him. He was driving the Swamp Mutha, one of the artcar museum cars. I walked up and being the smart ass I can be, pretended like I didn’t know and asked, “hey this car is cool (it is), did you build it?” Tom went into artcar museum curator mode and said “actually, this car was built back in the early 80’s by…” I stopped him, “Tom, I know, I was just kidding.” He said “Aw you son of a bitch, you really got me. I owe you one now.” in that mock angry voice he would sometimes use. We smiled and laughed as he drove off to find his spot in the lineup

The memorial service for Houston artist Tom Jones will likely involve Art Cars, bikers and bagpipes. It will be lively, quirky and inherently Scottish — like Tom, his relatives said Monday.

Friends and family spent Monday making funeral arrangements for Jones, who was killed early Sunday morning when a suspected drunken driver plowed a parked car on top of him as he sat on a curb in front of the Art Car Museum. He was the museum curator.

The driver, Dustin Allen Poe, 23, was released on bail Monday afternoon. Poe, of Mexia, was charged with intoxicated manslaughter following the 2 a.m. crash. He could not be reached for comment.

If convicted, Poe could face two to 20 years in prison. He was previously convicted of drunken driving in Waco four years ago.

As news of Jones’ death rippled through Houston’s art community, some who knew him were outraged over the senselessness of the crash.

But Jones wouldn’t want to see lives poisoned with anger, his family said.

“Tom was very much into increasing the peace,” said his older sister, Barb Jones. “The kid who hit him has made his own hell, and Tom would not want any particular negativity toward him.”

Tom Jones, who moved to Houston with his family when he was 12, was well-known in the arts community as a talented artist in a variety of media, and as a mentor to others.

He had a degree in radio, TV and film from Sam Houston State University, where he had a radio show. In his professional life, he focused on photography. He became curator of the Art Car Museum four years ago. He had been active in the Art Car Parade since its inception in 1988.

He was a skilled mechanic, said his sister. On Monday, she stood in his garage and looked at the three cars he’d been working on recently.

His primary mode of transportation was a classic Volkswagen sports car, the Karmann Ghia.

Until seven years ago, Jones was also an avid biker, who favored Harley-Davidsons. One day he was riding his Harley to work when a pickup hit him at an intersection.

“Tom and his motorcycle got tumbled and crunched,” his sister said. “One leg had a compound fracture and the other foot was crushed.”

Jones, who had to learn to walk again, never fully regained the use of his legs. He gave up his motorcycle because he didn’t feel coordinated enough to drive it safely, friends and family said.

But he never held a grudge against the driver who hit him.

“It angered me more than it angered him,” said his brother-in-law, Pat Southard.

Some of his friends blame the injuries from his previous accident for not letting him scoot out of the path of Poe’s car on Sunday.

“That’s why he died out there,” said Noah Edmundson, director of the Art Car Museum. “He couldn’t get out of the way.”

Jones’ family has planned a celebration of his life for 3 p.m. Sunday at the museum. The service will likely draw crowds from the various communities he touched — Art Car drivers, bikers, and even the friends who, with Jones, formed a roller-skating club in the ’80s, called the Urban Animals.

The massive show of support from those groups had already cheered his grieving family.

“All of this outpouring has really taken a lot of the horror out of this, at least for the moment,” said his sister.

The friends who are planning his memorial service hope it will reflect his zany humor and uplifting spirit, down to the bagpipes his brother-in-law bought him in Scotland as a lark.

By Monday afternoon, an impromptu shrine outside the Art Car Museum had grown to cover the curb where he was hit and the fence behind it with tokens to mark his life: the speed gauge from a Harley, riding gloves, strips of film negatives and a slide projector tray.

There was an orange tree from the Orange Show Center for Visionary Art, which organizes the Art Car Parade. And there were pieces from Saturday’s crop of Art Cars: a plastic hamburger, a Buddha statue and a mounted animatronic bass bearing the inscription, “Tom, we remember your laughter.”

An Interview with Tom Jones

This entry was posted in RagBlog and tagged Arts, Folk Art, People, Texas. Bookmark the permalink.