ART / ‘Man at Work’ Exhibition Has Lessons for Today 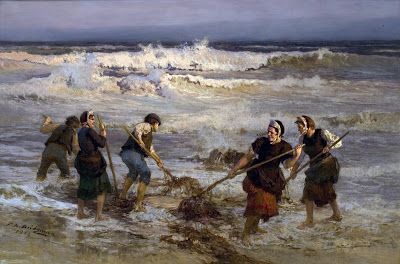 The Grohmann Museum, a modern building with a cylindrical entrance way reaching up to the fourth floor, is nestled among a variety of interesting and renovated older buildings in downtown Milwaukee, Wisconsin. The museum is a block from an old Blatz Brewery building that looks like it has been converted into high income condominiums.

Inside the Museum is an extraordinary collection of paintings, over 700, covering 400 years of artistry, all about work and workers. An additional visiting exhibit, “Cradle of Industry,” added paintings of German industrialization from the mid-nineteenth century to the 1960s and some recent documentary photos.

The paintings together illustrated the evolution of work, from agriculture, to crafts people (cobblers, blacksmiths, cork makers, glass blowers, and taxidermists), to miners and forgers, bridge builders, and steel makers. Additional paintings presented women picking hops for beer making, a seventeenth century accountant pouring over his books, and a surgeon opening up a patient’s head. Some of the paintings portrayed twentieth century factory work and a few documentary photos showed workers amassing in strikes against their bosses.

The paintings were collected by Dr. Eckhart Grohmann, a local entrepreneur who acquired and expanded a local aluminum casting and engineering company in Milwaukee. Grohmann reported that as a child he visited his grandfather’s marble processing company in Poland where he watched stonecutters and sculptors engaging in their craft. It was there, he reported, that he grew to appreciate hard work not as “an idealized concept but a principle of life.” Grohmann’s goal was to present in these paintings “a clear image of the honor of work.”

Viewing these many images of work, the viewer develops a profound appreciation of the centrality of human labor to the evolution of civilization. The paintings suggested how classical economists like Karl Marx could develop theories based on the idea that the value of all commodities came from the amount of work time that went into their production. In short, labor was the basis of all value.

Unfortunately, while the paintings powerfully underscore the basic Marxian idea about the value of work, contemporary politicians see work and workers as disposable. If they are organized in their work places they are impediments to human progress.

So goes the recent hint by the Obama administration that it will force General Motors and Chrysler into bankruptcy court. The New York Times wrote on April 1 what the consequences of this might be for workers: “In bankruptcy, companies can seek to persuade a judge to set aside labor contracts and terminate pension plans, by making a case that they are too expensive, forcing workers to rely on smaller government-provided retirement checks.”

In addition, Republicans, so-called moderate Democrats, Bank of America, Starbucks, Costco, the Chamber of Commerce and other representatives of big capital are marshaling resources to forestall the Employee Free Choice Act from becoming law. EFCA would make it easier, in the face of company pressures, for workers to form unions. If workers have a realistic chance of voting in unions they will do so. If they do have unions, wages and benefits will rise and workers’ basic quality of life and sense of security will rise. Finally, increasing numbers of workers with jobs at livable wages could stimulate economic growth.

Visiting the Grohmann Museum suggests the profound gap between the history of human civilization, built on the skills and energies of workers, and the way in which the contemporary political economy denigrates, marginalizes, and humiliates workers. Empowering and rewarding the working class must be central to progressive change in the days, weeks, and years ahead.

Harry Targ, who posts to Progressives for Obama, teaches political science. This article also appears on his website, Diary of a Heartland Radical.