At yesterday’s news conference in the Rose Garden, the President gave the following response to a question about the legislation he is seeking to have approved by Congress:

Q Thank you very much, sir. What do you say to the argument that your proposal is basically seeking support for torture, coerced evidence and secret hearings? And Senator McCain says your plan will put U.S. troops at risk. What do you think about that?

THE PRESIDENT: This debate is occurring because of the Supreme Court’s ruling that said that we must conduct ourselves under the Common Article III of the Geneva Convention. And that Common Article III says that there will be no outrages upon human dignity. It’s very vague. What does that mean, “outrages upon human dignity”? That’s a statement that is wide open to interpretation. And what I’m proposing is that there be clarity in the law so that our professionals will have no doubt that that which they are doing is legal. You know, it’s — and so the piece of legislation I sent up there provides our professionals that which is needed to go forward.

The first question that we’ve got to ask is, do we need the program? I believe we do need the program. And I detailed in a speech in the East Room what the program has yield — in other words, the kind of information we get when we interrogate people, within the law. You see, sometimes you can pick up information on the battlefield; sometimes you can pick it up through letters; but sometimes you actually have to question the people who know the strategy and plans of the enemy. And in this case, we questioned people like Khalid Sheikh Mohammed, who we believe ordered the attacks on 9/11, or Ramzi Binalshibh, or Abu Zabeda — cold-blooded killers who were part of planning the attack that killed 3,000 people. And we need to be able to question them, because it helps yield information, the information necessary for us to be able to do our job.

[I added the emphasis. If you want to read the entire transcript of the press conference, you can do so here.]

Here is the full text of (common) article 3 of the Geneva Conventions:

In the case of armed conflict not of an international character occurring in the territory of one of the High Contracting Parties, each Party to the conflict shall be bound to apply, as a minimum, the following provisions:

(1) Persons taking no active part in the hostilities, including members of armed forces who have laid down their arms and those placed hors de combat by sickness, wounds, detention, or any other cause, shall in all circumstances be treated humanely, without any adverse distinction founded on race, colour, religion or faith, sex, birth or wealth, or any other similar criteria. To this end the following acts are and shall remain prohibited at any time and in any place whatsoever with respect to the above-mentioned persons:

(a) violence to life and person, in particular murder of all kinds, mutilation, cruel treatment and torture; (b) taking of hostages; (c) outrages upon personal dignity, in particular, humiliating and degrading treatment; (d) the passing of sentences and the carrying out of executions without previous judgment pronounced by a regularly constituted court affording all the judicial guarantees which are recognized as indispensable by civilized peoples.

(2) The wounded and sick shall be collected and cared for.

An impartial humanitarian body, such as the International Committee of the Red Cross, may offer its services to the Parties to the conflict.

Call me naive, but the language here is not vague to me. Perhaps I can remind our readers of one of the “outrages of personal dignity” which is prohibited under clause (1-c) that the President terms “vague”: 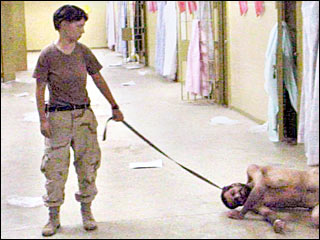 Please remember that those who have been charged in this entire Abu Ghraib fiasco have made clear that their orders were coming from above, and there is plenty of evidence that the general attitude of indifference, and even contempt, to the treatment of any prisoners in US custody comes directly from the Pentagon and its highest circles.

And let’s revisit another tactic employed in Iraq, namely that of taking women hostage to induce their husbands to surrender to US military authorities:

Officially, at least, America condemns hostage taking on both moral and practical grounds. It is both wrong and ineffective.

But that hasn’t deterred some rogue U.S. military units in Iraq from seizing and jailing wives of suspected insurgents — including one young mother of a nursing baby — in hopes of “leveraging” their husbands’ surrender. In military documents detailing the 2004 incidents, none of the unknown number of women were suspects. Instead, they appear to have been detained after raids on suspected male insurgents’ homes turned up empty.

The mother of the infant was held for two days, even after an officer complained that the woman “had no actionable intelligence leading to the arrest of her husband.” After seizing another woman in lieu of her husband, an Army colonel suggested challenging her husband “to come and get his wife.”

It’s unclear how widespread this has become among American forces. The former commander of Abu Ghraib prison has said this tactic has become a part of the war in Iraq.

Perhaps the President finds article 3 vague in exactly the same way that the following words were found vague enough to allow the enslavement of African Americans for almost 100 years after 1776 and to continue to treat them as second class citizens for an additional 100 years, and to disenfranchise women for almost 150 years after the birth of the nation.

“We hold these truths to be self-evident, that all men are created equal, that they are endowed by their Creator with certain unalienable Rights, that among these are Life, Liberty and the pursuit of Happiness.“

This is an argument about Humanity and what we are to define as common decency for all humans. And nothing that the minour league, hypocritical asshole in the White House says is going to change that.