As Go the Penquins, So Goes the Sea 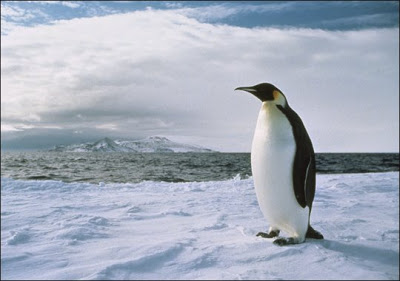 Bellwether Species?
A king penguin at the edge of an ice shelf in Antarctica. Photo from Getty Images.
Penguin Woes Signal Trouble at Sea
By Seth Borenstein / July 1, 2008

The dwindling march of the penguins is signaling that the world’s oceans are in trouble, scientists now say.

Penguins may be the tuxedo-clad version of a canary in the coal mine, with generally ailing populations from a combination of global warming, ocean oil pollution, depleted fisheries, and tourism and development, according to a new scientific review paper.

A University of Washington biologist detailed specific problems around the world with remote penguin populations, linking their decline to the overall health of southern oceans.

“Now we’re seeing effects (of human caused warming and pollution) in the most faraway places in the world,” said conservation biologist P. Dee Boersma, author of the paper published in the July edition of the journal Bioscience. “Many penguins we thought would be safe because they are not that close to people. And that’s not true.”

Scientists figure there are between 16 to 19 species of penguins. About a dozen are in some form of trouble, Boersma wrote. A few, such as the king penguin found in islands north of Antarctica, are improving in numbers, she said.

The International Union for the Conservation of Nature lists three penguin species as endangered, seven as vulnerable, which means they are “facing a high risk of extinction in the wild,” and two more as “near threatened.” About 15 years ago only five to seven penguin species were considered vulnerable, experts said.

And the U.S. Fish and Wildlife Service, which has already listed one penguin species on its endangered list, is studying whether it needs to add 10 more.

The largest Patagonian penguin colony in the world is at Punta Tumbo, Argentina, but the number of breeding pairs there dropped in half from about 400,000 in the late 1960s to about 200,000 in October 2006, Boersma reported. Over a century, African penguins have decreased from 1.5 million breeding pairs to 63,000.

The decline overall isn’t caused by one factor, but several.

For the ice-loving Adelie penguins, global warming in the western Antarctica peninsula is a problem, making it harder for them to find food, said Phil Trathan, head of conservation biology at the British Antarctic Survey, a top penguin scientist who had no role in the new report.

For penguins that live on the Galapagos island, El Nino weather patterns are a problem because the warmer water makes penguins travel farther for food, at times abandoning their chicks, Boersma said. At the end of the 1998 record El Nino, female penguins were only 80 percent of their normal body weight. Scientists have tied climate change to stronger El Ninos.

Oil spills regularly taint the water where penguins live off Uruguay, Argentina and Brazil and have contributed to the Punta Tumbo declines, Boersma said.

The problems may be different from place to place, but looking at the numbers for the species overall, “they do give you a clear message,” Trathan said.

And this isn’t just about the fate of penguins.

“What happens to penguins, a few years down the road can happen to a lot of other species and possibly humans,” said longtime penguin expert Susie Ellis, now executive director of the International Rhino Foundation.