As Rumsfeld Declared Victory, the Taliban Began Their Reconquest of Afghanistan 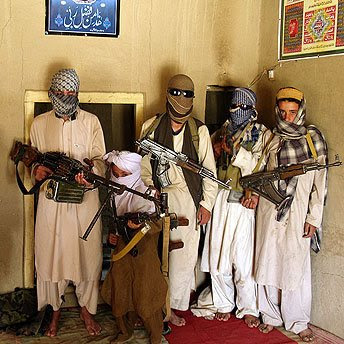 Photo: Nir Rosen
How We Lost the War We Won: A journey into Taliban-controlled Afghanistan
By Nir Rosen / October 16, 2008

The highway that leads south out of Kabul, the capital of Afghanistan, passes through a craggy range of arid, sand-colored mountains with sharp, stony peaks. Poplar trees and green fields line the road. Nomadic Kuchi women draped in colorful scarves tend to camels as small boys herd sheep. The hillsides are dotted with cemeteries: rough-hewn tombstones tilting at haphazard angles, multicolored flags flying above them. There is nothing to indicate that the terrain we are about to enter is one of the world’s deadliest war zones. On the outskirts of the capital we are stopped at a routine checkpoint manned by the Afghan National Army. The wary soldiers single me out, suspicious of my foreign accent. My companions, two Afghan men named Shafiq and Ibrahim, convince the soldiers that I am only a journalist. Ibrahim, a thin man with a wispy beard tapered beneath his chin, comes across like an Afghan version of Bob Marley, easygoing and quick to smile. He jokes with the soldiers in Dari, the Farsi dialect spoken throughout Afghanistan, assuring them that everything is OK.

As we drive away, Ibrahim laughs. The soldiers, he explains, thought I was a suicide bomber. Ibrahim did not bother to tell them that he and Shafiq are midlevel Taliban commanders, escorting me deep into Ghazni, a province largely controlled by the spreading insurgency that now dominates much of the country.

Until recently, Ghazni, like much of central Afghanistan, was considered reasonably safe. But now the province, located 100 miles south of the capital, has fallen to the Taliban. Foreigners who venture to Ghazni often wind up kidnapped or killed. In defiance of the central government, the Taliban governor in the province issues separate ID cards and passports for the Taliban regime, the Islamic Emirate of Afghanistan. Farmers increasingly turn to the Taliban, not the American-backed authorities, for adjudication of land disputes.

By the time we reach the town of Salar, only 50 miles south of Kabul, we have already passed five tractor-trailers from military convoys that have been destroyed by the Taliban. The highway, newly rebuilt courtesy of $250 million, most of it from U.S. taxpayers, is pocked by immense craters, most of them caused by roadside bombs planted by Taliban fighters. As in Iraq, these improvised explosive devices are a key to the battle against the American invaders and their allies in the Afghan security forces, part of a haphazard but lethal campaign against coalition troops and the long, snaking convoys that provide logistical support.

We drive by a tractor-trailer still smoldering from an attack the day before, and the charred, skeletal remains of a truck from an attack a month earlier. At a gas station, a crowd of Afghans has gathered. Smoke rises from the road several hundred yards ahead.

“Jang,” says Ibrahim, who is sitting in the front passenger seat next to Shafiq. “War. The Americans are fighting the Taliban.”

Shafiq and Ibrahim use their cellphones to call their friends in the Taliban, hoping to find out what is going on. Suddenly, the chatter of machine-gun fire erupts, followed by the thud of mortar fire and several loud explosions that shake the car. I flinch and duck in the back seat, cursing as Shafiq and Ibrahim laugh at me.

“Tawakkal al Allah,” Shafiq lectures me. “Depend on God.”

This highway — the only one in all Afghanistan — was touted as a showpiece by the Bush administration after it was rebuilt. It provides the only viable route between the two main American bases, Bagram to the north and Kandahar to the south. Now coalition forces travel along it at their own risk. In June, the Taliban attacked a supply convoy of 54 trucks passing through Salar, destroying 51 of them and seizing three escort vehicles. In early September, not far from here, another convoy was attacked and 29 trucks were destroyed. On August 13th, a few days before I pass through Salar, the Taliban staged an unsuccessful assassination attempt on the U.S.-backed governor of Ghazni, wounding two of his guards.

As we wait at the gas station, Shafiq and Ibrahim display none of the noisy indignation that Americans would exhibit over a comparable traffic jam. To them, a military battle is a routine inconvenience, part of life on the road. Taking advantage of the break, they buy a syrupy, Taiwanese version of Red Bull called Energy at a small shop next door. At one point, two green armored personnel carriers from NATO zip by, racing toward Kabul. Shafiq and Ibrahim laugh: It looks like the coalition forces are fleeing the battle.

After an hour, the fighting ends, and we get back in the car. A few minutes later, we pass the broken remains of a British supply convoy. Dozens of trucks — some smoldering, others still ablaze — line the side of the road, which is strewn with huge chunks of blasted asphalt. The trucks carried drinks for the Americans, Ibrahim tells me as we drive past. Hundreds of plastic water bottles with white labels spill out of the trucks, littering the highway.

Farther down the road, American armored vehicles block our path. Smoke pours from the road behind them. Warned by other drivers that the Americans are shooting at approaching cars, Shafiq slowly maneuvers to the front of the line and stops. When the Americans finally move, we all follow cautiously, like a nervous herd. We drive by yet more burning trucks. Ibrahim points to three destroyed vehicles, the remains of an attack four days earlier.

A few miles later, at a lonely desert checkpoint manned by the Afghan army, several soldiers with AK-47s make small talk with Shafiq and Ibrahim, asking them about the battle before waving us through. As night falls, we pass a police station. We have reached Ghazni province.

“From now on, it’s all Taliban territory,” Ibrahim tells me. “The Americans and police don’t come here at night.”

Shafiq laughs. “The Russians were stronger than the Americans,” he says. “More fierce. We will put the Americans in their graves.”

It has been seven years since the United States invaded Afghanistan in the wake of September 11th. The military victory over the Taliban was swift, and the Bush administration soon turned its attention to rebuilding schools and roads and setting up a new government under President Hamid Karzai. By May 2003, only 18 months after the beginning of the war, Defense Secretary Donald Rumsfeld all but declared victory in Afghanistan. “We are at a point where we clearly have moved from major combat activity to a period of stability and stabilization and reconstruction,” Rumsfeld announced during a visit to Kabul. The security situation in Afghanistan, in his view, was better than it had been for 25 years.

But even as Rumsfeld spoke, the Taliban were beginning their reconquest of Afghanistan. The Pentagon, already focused on invading Iraq, assumed that the Afghan militias it had bought with American money would be enough to secure the country. Instead, the militias proved far more interested in extorting bribes and seizing land than pursuing the hardened Taliban veterans who had taken refuge across the border in Pakistan. The parliamentary elections in 2005 returned power to the warlords who had terrorized the countryside before the Taliban imposed order. “The American intervention issued a blank check to these guys,” says a senior aid official in Kabul. “They threw money, weapons, vehicles at them. But the warlords never abandoned their bad habits — they’re abusing people and filling their pockets.

By contrast, aid for rebuilding schools and clinics has been paltry. In the critical first two years after the invasion, international assistance amounted to only $57 per citizen — compared with $679 in Bosnia. As U.S. contractors botched reconstruction jobs and fed corruption, little of the money intended to rebuild Afghanistan reached those in need. Even worse, the sudden infusion of international aid drove up real estate and food prices, increasing poverty and fueling widespread resentment.

The government of Pakistan, seeking to retain influence over what it views as its back yard, began helping the Taliban regroup. With the Bush administration focused on the war in Iraq, money poured into Afghanistan from Al Qaeda and other Islamic extremists, who were eager to maintain a second front against the American invaders. The Taliban — once an isolated and impoverished group of religious students who knew little about the rest of the world and cared only about liberating their country from oppressive warlords — are now among the best-armed and most experienced insurgents in the world, linked to a global movement of jihadists that stretches from Pakistan and Iraq to Chechnya and the Philippines.

The numbers tell the story. Attacks on coalition and Afghan forces are up 44 percent since last year, the highest level since the war began. By October, 135 American troops had been killed in Afghanistan this year — already surpassing the total of 117 fatalities for all of 2007. The Taliban are also intensifying their attacks on aid workers: In a particularly brazen assault in August, a group of Taliban fighters opened fire on the car of a U.S. aid group, the International Rescue Committee, killing three Western women and their Afghan driver on the main road to Kabul.

The Bush administration, belatedly aware that it was losing Afghanistan, responded to the violence as it did in Iraq: by calling for more troops. Speaking at the National Defense University on September 9th, the president announced a “quiet surge” of U.S. troops in Afghanistan, saying additional forces are necessary to stabilize “Afghanistan’s young democracy.” But the very next day, testifying before the House Armed Services Committee, Adm. Mike Mullen, chairman of the Joint Chiefs of Staff, offered a sharply different assessment. His prepared testimony, approved by the secretary of defense and the White House, read, “I am convinced we can win the war in Afghanistan.” But when Mullen sat down before Congress, he deviated from his prepared statement. “I am not convinced we are winning it in Afghanistan,” he testified bluntly.

Read all of it here. / Rolling Stone

This entry was posted in RagBlog and tagged Afghanistan, al-Qaida, War. Bookmark the permalink.