Ashamed and Disgusted at What is Happening 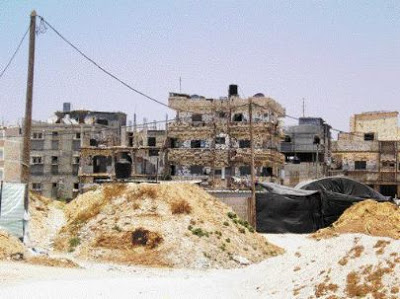 I had expected conditions in Gaza to be bad, but I was still shocked at the devastation when I went there in July.

Last month my companion and I entered Gaza at the Erez crossing through a modern building reminiscent of an airport terminal. After questioning by the Israeli border police, we left the building and had a kilometre walk to pick up transportation.

It was as if we had travelled to another planet. The sandy track is surrounded by the blown-up remnants of Gaza’s former industrial district. Rubble stretching for hundreds of metres lines the route.

Even on the main road through Gaza, driving is a slalom course around potholes. The air reeks of burnt oil and stale food from exhaust fumes (cars rely on used cooking oil for fuel.)

There are not many cars on the road, anyway. Donkey carts are common.

Despite the 35 C temperatures, drivers don’t use air conditioning in cars so they can save fuel.

Every so often, the smell of sewage fills the air. Lack of treatment facilities means that much of it is dumped raw into the Mediterranean.

We went first to a children’s hospital on the edge of Gaza City. The hospital director and doctors described the conditions. Of 100 beds, 40 were occupied by children with bacterial meningitis, an extremely serious disease.

There’s a shortage of basic medicines and supplies, even simple things such as alcohol swabs.

The hospital has three ventilators; only one is working. Israel won’t let in spare parts for the others.

There are many cases of malnutrition — for example, children nearly a year old weighing 3 kilograms (6.6 pounds). Their families can’t afford the special formula they need to improve.

Because of lack of equipment and qualified personnel, there is no radiotherapy and limited chemotherapy in Gaza.

Treatment for many conditions can only be obtained in Israel. Physicians for Human Rights — Israel reports that, despite the ceasefire in the last few weeks, emergency medical cases are still refused entry into Israel, where they could have life-saving treatment. PHR has documented many cases of people dying before they are treated.

Indeed the proportion of patients denied exit from Gaza for treatment has increased since last year.

PHR will soon release a report on “medical extortion.” Some sick Palestinians are interrogated at the Erez crossing and asked to become informants or collaborators as a condition of permission to leave Gaza for medical treatment.

After leaving the hospital, we travelled to the southern end of Gaza. We stopped at the Rafah crossing, the border with Egypt. It was closed, as it is most of the time.

A cluster of people were waiting, hoping against hope that they would be allowed to cross. Egypt is under pressure from both Israel and the U.S. not to open the border, and in any event, they do not want large numbers of refugees to flood in.

We drove into the city of Rafah, which has come under bombardment by the Israeli military. A huge number of buildings have been severely damaged or completely destroyed.

For street after street, barely any building is untouched. Makeshift shacks of corrugated metal and cloth sheets are now homes for those who have lost their housing.

We returned north along the coast road. The beauty of the sea view contrasted sharply with the rest of what we had seen.

After passing the Ash-Shati refugee camp, we went by modern hotels. They wait in vain for customers. The Gazan economy, devastated by Israel’s border controls, continues to languish.

My sister and her husband are Orthodox Jews living near Tel Aviv. They are outraged at Israel’s behaviour, especially the restrictions on sick patients needing to leave Gaza. My brother-in-law, a former chair of family medicine at Tel Aviv University and a specialist in medical ethics, has complained publicly about this.

As a Jew, I, too, am ashamed and disgusted at what is happening. Yes, Israel needs security. But what is happening goes far beyond security needs.Israel’s actions amount to collective punishment, forbidden under international law.

I am ashamed that the Harper government has tilted toward unconditional support for Israel against the Palestinians. The current policy is unconscionable, as anyone who visits Gaza can see only too well.

[Harry Shannon is a professor of clinical epidemiology and bio- statistics at McMaster University, and a member of Independent Jewish Voices. He lives in Dundas.]

This entry was posted in RagBlog and tagged Israel, Palestine, War. Bookmark the permalink.